Klinsmann insists he was not jockeying for Bradley's job 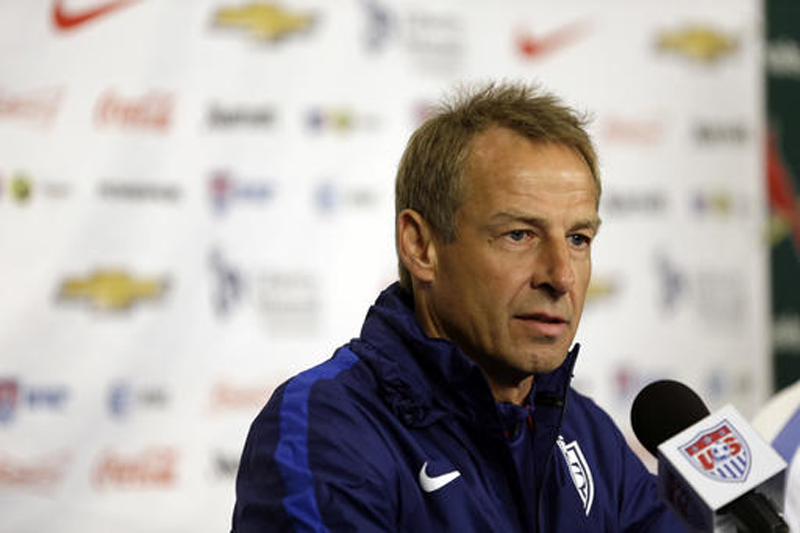 FILE - This Nov. 12, 2015 file photo shows U.S. men's national soccer team coach Jurgen Klinsmann taking part in a news conference in St. Louis. Klinsmann rejects Bob Bradley's claims that he angled to success him as U.S. coach while working as an ESPN analyst during the 2010 World Cup. Bradley made the claim when he was introduced as Swansea, the first American head coach in England's Premier League. (AP Photo/Jeff Roberson, file)

Bradley was fired soon after a 4-2 loss to Mexico in the 2011 CONCACAF Gold Cup final and replaced by Klinsmann, a former German national team star player and coach. Bradley made the claim Friday when he was introduced as Swansea, the first American head coach in England's Premier League.

"No. I mean it's simply not true," Klinsmann said Monday ahead of his team's exhibition against New Zealand. "I could have taken the job in 2006. I could have taken it in 2010. And then we got together in 2011 to finally figure out a way to make this happen. So I was not jockeying anything."

Klinsmann's comments come three days after Bradley accused him of "already jockeying for the job" while Klinsmann was an ESPN analyst during the 2010 World Cup.

"I wish Bob the very, very best," Klinsmann said Monday. "I think it's a big, big moment having an American coach coaching a Premier League club. I think it's huge. And he's an awesome guy. He's a good person, and I just keep my fingers crossed for him."

The match against No. 88 New Zealand is the last before the 22nd-ranked U.S. opens the final round of North and Central American and Caribbean qualifying against Mexico in November. It is the first of 10 matches in the six-team hexagonal that decided three World Cup places and a fourth-place team that advances to a playoff against an Asian nation.

Klinsmann opposed that Monday, insisting that the U.S. and other regional powers are hurt by fewer opportunities to face quality international opponents.

"If we want to get better, we need to play with the best teams out there from South America or from Europe," Klinsmann said. "What does that mean? For us it means, it would be the opposite direction" of Montagliani's suggestion.

The U.S. let many regulars rejoin their clubs ahead of the New Zealand match, which comes a year and a day after Klinsmann's U.S. team lost to Mexico 3-2 in overtime in the playoff for a berth in the 2017 Confederations Cup.

New Zealand lost to Mexico 2-1 Saturday. Klinsmann wished the U.S. could have scheduled a higher-ranked opponent, but Europe and South America had World Cup qualifiers scheduled.

"Ghana wasn't allowed to come because they play one game in Europe and they're not allowed to play a second game in another continent," he said. "We go the list up and down. Believe me, we're trying to get the best opponents as possible."