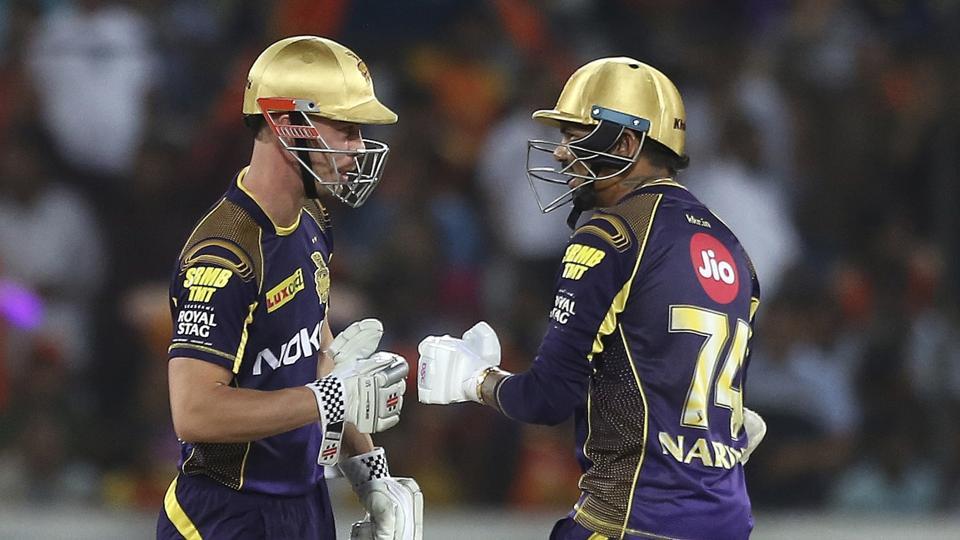 Chris Lynn’s aggressive fifty helped Kolkata Knight Riders chase down 173 and win the game by five wickets against Sunrisers Hyderabad to seal a spot in the play-offs. (AP)

May 20: Kolkata Knight Riders raised their game in pressure situations to nail a 173-run chase and defeat Sunrisers Hyderabad in the Indian Premier League on Saturday, sealing their spot in the playoffs.

The visitors, on 14 points against table-toppers SRH (18 points) going into the match, secured 16 points at the end of their 14th and final league game. Sunrisers were already through and will feature in the qualifiers.

KKR, the twice former champions, came back strongly through their bowlers to restrict SRH to 172/9. The Dinesh Karthik-led team finished on 173/5 in 19.4 overs.

Lynn took little time to settle down as he announced his presence with two fours off the first over by Bhuvneshwar Kumar. He and Narine shared a 52-run stand before the latter fell to Shakib Al Hasan.

However, there was no stopping Lynn as he reached his third half century with a huge six off Sandeep Sharma and built a 67-run stand with Robin Uthappa. Though he fell on 55 with KKR on 119/2, Uthappa and Karthik batted with responsibility to take forward KKR’s charge.

KKR bowlers made a strong comeback against SRH batsmen despite getting hammered for 92 runs in the first 10 overs. In the final 10, KKR gave 80 runs and took eight wickets, with pacer Prasidh Krishna dismissing four SRH batsmen.

SRH skipper Kane Williamson and Shikhar Dhawan have found little support from other batsmen this season, and the story was repeated on Saturday. The former scored a 17-ball 36 while Dhawan scored a 39-ball 50.

Apart from Shreevats Goswami (35), none of the other batsmen showed the gumption to fight. After Dhawan, who scored his fourth half-century, and Goswami’s fluent stand took SRH to 76/0 in eight overs, Chinaman bowler Kuldeep Yadav dismissed Goswami in the ninth over. He looked to go after the spinner and was caught by Andre Russell at long-on.

Williamson did not let the run-rate go down as he showed little mercy against the wavering line of KKR bowlers. He was also caught by Russell off Javon Searles in 13th over as SRH’s slide started. Krishna landed the killer blow on SRH when he trapped Dhawan in front in the 16th over as the rest of the batsmen fell like a pack of cards.

Aussies win by 6 wickets, secure a spot in tri-series final