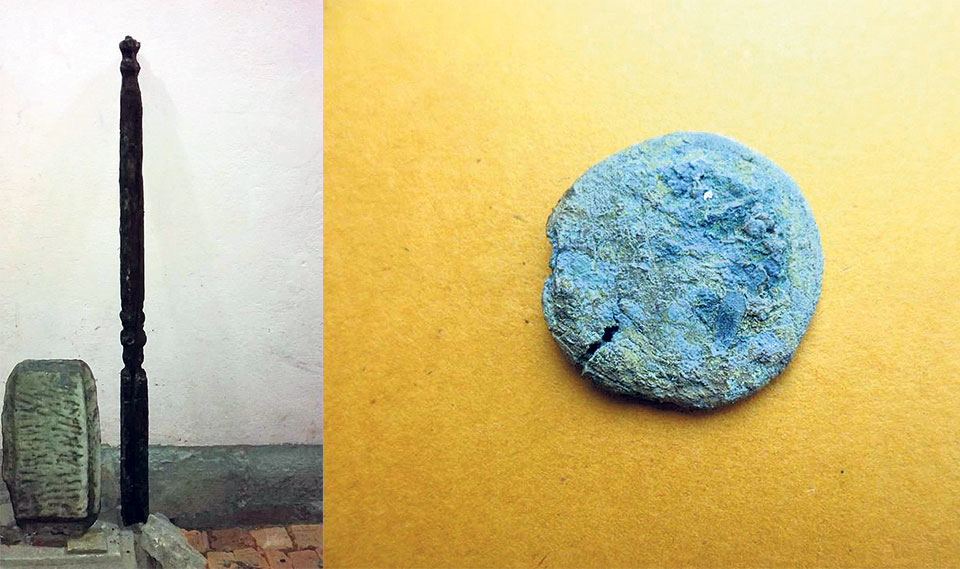 During a week of excavation, the locals have dug up a six-foot wooden pillar (left), a silver coin (right) and the remains of an 11 by 8 feet foundation for a building. They have also dug up a stone inscription. Photos courtesy: Binod Basnet

KATHMANDU, April 6: The locals of Kirtipur Municipality-6, who dug up a Lichchhavi era idol of the Hindu deity Vishnu along with his consort Laxmi last Saturday, have uncovered more ancient artefacts during further excavations.

During a week of excavation, the locals have dug up a six-foot wooden pillar, a silver coin and the remains of an 11 by 8 feet foundation for a building. They have also dug up a stone inscription, which is yet to be studied by the Department of Archeology (DoA).

According to the locals, the silver coin and the remains of the foundation were found on Thursday and the pillar and the stone inscription on Friday. “The pillar was dug up from some seven feet under the ground,” Binod Basnet, a local, told Republica.

The locals had dug up the Vishnu and Laxmi while rebuilding an earthquake-damaged temple. The deities have been identified by DoA as Lichchhavi-era. The locals of Kiritpur Municipality-6, Charghare, which is about 9 kilometres from the capital, were surprised to find the ancient looking idol while carrying out reconstruction work at Jalapadevi temple. They are now continuing the excavation for other possible finds.

The Lichchhavi era from 400 and 750 AD is often considered a golden age in Nepal when art, culture and architecture flourished. However, very few structures built then are still standing today.

Basnet, who is secretary of the Greater Charghare Religious Committee, claimed that they have already informed the local authorities about the new finds. But the latter are yet to inform the DoA. “We have not yet been informed about further findings,” spokesperson at DoA Ram Bahadur Kunwar told Republica. “Once the finds are notified, we will send an inspection team.”

The locals complain that a financial crunch has affected the excavation. “We had to destroy a recently reconstructed building in order to carry out the excavation, and we will have to build it again,” Basnet said. Currently, four workers have been hired by the locals themselves to continue the excavation work.

KAPILVASTU, Jan 8: Excavation and exploration have started in ancient Tilaurakot where the Palace of King Suddhodan, father of Gautam... Read More...