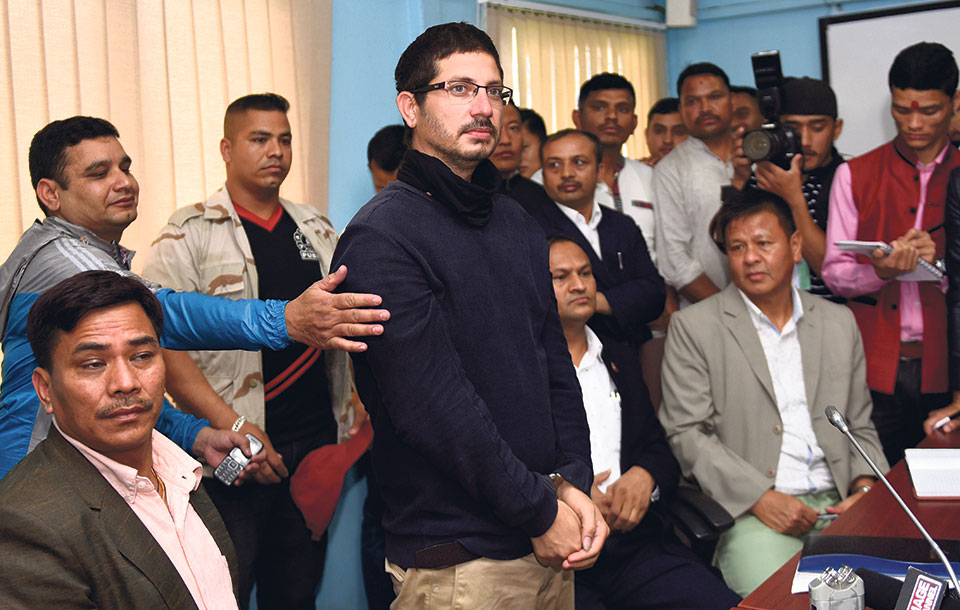 Police make public Chudamani Upreti alias Gore, the main suspect in the 33-kg gold smuggling case, at a press conference at the Ministry of Home Affairs at Singha Durbar on Tuesday. Police claimed that Upreti was arrested from Gaurighat, Kathmandu on Tuesday morning. Photo: Dipesh Shrestha/Republica

KATHMANDU, May 23: Chudamani Uprety aka Gore, the alleged kingpin in the high-profile case of smuggling of 33 kg gold  and murder of Sanam Shakya, has finally landed in the police net.

A high-level investigation committee formed by the Home Ministry made  Gore public amid a press conference at the ministry on Tuesday.

Addressing the press conference,  Joint-Secretary Ishwar Paudel, coordinator of the investigation committee, claimed that Gore was arrested from Gaurighat, Kathmandu by a special police team deployed by the committee in the morning. He had been on the lam ever since the smuggling case came to light after the murder of  Shakya, who was allegedly used for smuggling gold for Gore from Dubai. Gore has been accused of murdering Shakya for allegedly making off with the 33 kg  smuggled gold from  Tribhuvan International Airport on January 23, 2017.

However, it is not clear whether Gore was arrested or surrendered himself. In a sort of confession video which seems to have been filmed by Gore himself prior to his arrest and was uploaded on Youtube, he has said he was surrendering to police since his life was under threat from the owners of the smuggled gold.

“I want to surrender. I was  under pressure to find the missing gold. They (gold owners) have been pressuring me to either come up with the missing gold or pay its monetary value. How shall I pay such money? I am looking to save my skin. As surrendering will make me safe, that is what I want to do,” he said. He claims  he is innocent in the case.

Joint-Secretary Paudel said at the press conference that an intense search operation had been ongoing in various parts of Nepal and India to nab Gore. “We received a tip-off from intelligence that Gore had come to Kathmandu. Based on the information, we arrested him from Gaurighat around 5:34 am,” he said.

According to him, Gore has disclosed further information and handed over evidence to the committee about the involvement of 65 individuals in the gold smuggling and the subsequent abduction and murder.

On May 3, the Office of District Attorney (ODA) Morang filed a case in the gold smuggling case, implicating 65 people including police and TIA officials. Of these, 33  individuals are still at large. Preliminary hearings for 32 arrested  individuals have already started at the district court.

Paudel also said that interrogation of Gore has uncovered the involvement of  individuals other than the 65 already accused in the case.

“We will investigate  further. We will make the details public once the investigations are complete,” he added.

In the uploaded video, Gore  said that he was not the mastermind in the gold smuggling but rather a middleman. He has admitted that gold traders from India are also involved apart from Nepali  traders and that he was threatened by them to find the gold, or else.

A case of organized crime was filed against gold trader Mahabir Golyan, Rajendraman Shakya and Bhujung Gurung for  alleged involvement in the case.

After making Gore public, the authorities took him to Biratnagar by air for further investigations.

Mohan Karki, Ekraj Malla, Narendra Karki, Lakpa Sherpa and Mohan Ghimire have been accused of killing Sanam Shakya for allegedly hiding the gold while carrying it from to the airport  to the smugglers.

According to Acting Court Registrar Kedar Prasad Gautam, Constable Ambar Bahadur Thapa has been released against a court appearance date.

Why nations fail: Lessons for Nepal
6 hours ago

Bangladesh moves ahead with Rohingya refugee relocation
43 minutes ago