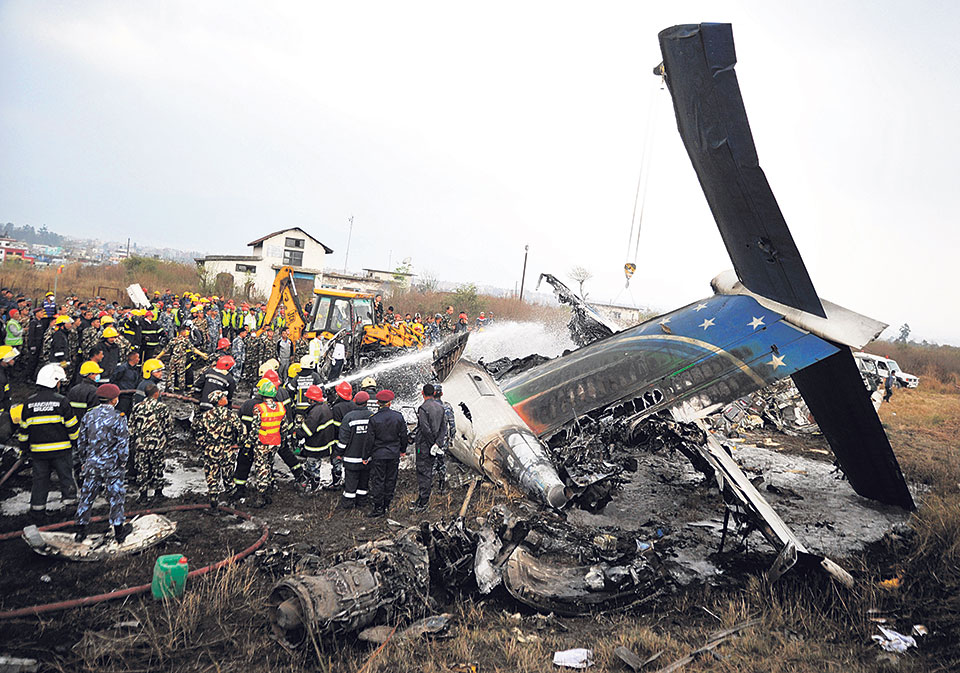 KATHMANDU, Aug 1: Relatives of some Nepali passengers killed in the 2018 US-Bangla Airlines Flight 211 crash have filed a lawsuit against the airline company demanding Rs 2.1 billion in compensation 'for wrongful deaths'.

The lawsuit was filed on Wednesday at the Kathmandu District Court by parents of seven Nepali students ­­-- Angela Shrestha, Aasana Shakya, Mili Maharjan, Niga Maharjan, Princi Dhami, Sanjaya Maharjan and Shreya Jha -- who died when the ill-fated plane crash-landed before burning into flames at the Tribhuvan International Airport on March 12, 2018.

The medical students, who were returning home on vacation from their college in Dhaka, were among 51 of 71 passengers killed in the crash.

The petitioners have said that they were forced to take legal recourse after the airline operators declined to pay them lawful compensation.

Citing the findings of a report prepared by a high-level probe panel led by former secretary Yagya Prasad Gautam, the petitioners have alleged the US Bangla Airlines and the plane's captain of 'willful misconduct and gross negligence'.

The report, prepared at the behest of Nepal government, among other things claims that the pilot captain Abid Sultan was discharging his duties under “severe mental stress” and was “emotionally disturbed”. The report further states that the 52-year-old pilot was declared unfit to fly in 1993 due to his medical condition (depression). He was again deemed 'mentally fit' in 2002.

According to the report, the pilot had recklessly landed 'the plane while in a turn, with the right bank, at an angle of about 15 degrees with the RWY [runway] axis resulting the right main landing gear to make hard impact on the left of the centerline of Runway 20, approximately 1700 meters from the threshold.

The US Bangla Airlines has challenged some of the key findings including claims that a fire extinguisher team had reached the crash site within two minutes after the accident. The airlines allege that TIA's Airport Traffic Control (ATC)'s "confusing instruction" was the main reason for the crash.

Advocate Amrit Kharel, chief legal advisor of the petitioners, said that the lawsuit, although filed in Kathmandu, is legally binding for the defendants as Nepal is member of various international treaties including the Montreal Convention 1999, Warsaw Convention 1929, and Hague Protocol 1955.

Article 33 of Montreal Convention, which Nepal ratified in 2018, states that an action for damages or damage resulting from the death or injury of a passenger “must be brought, at the option of the plaintiff, in the territory of one of the States Parties, either before the court of the domicile of the carrier or of its principal place of business, or where it has a place of business through which the contract has been made or before the court at the place of destination.”