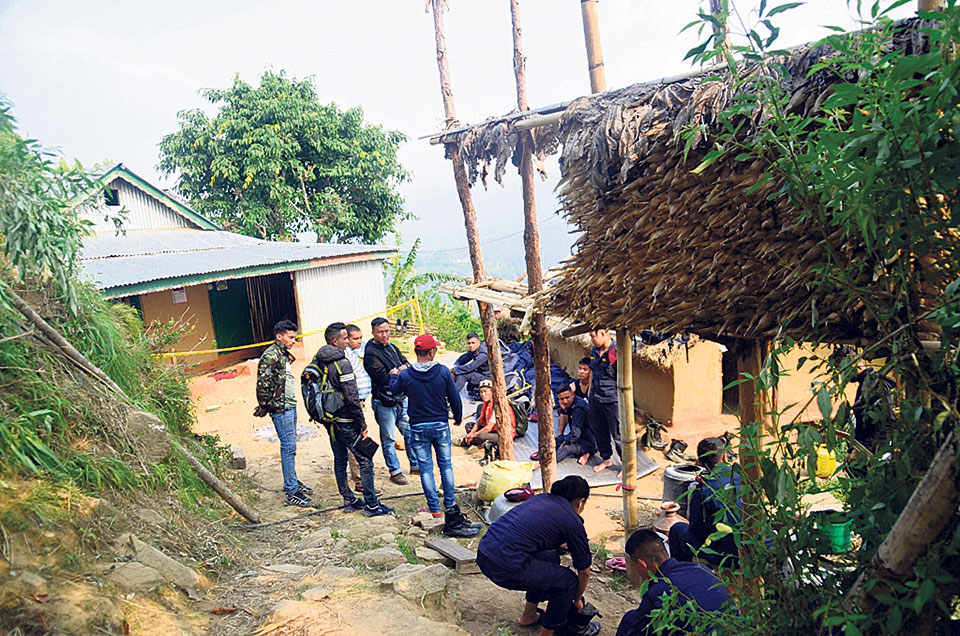 Locals and police at the house of Bam Bahadur Fiyak in Miklajung in Panchthar district on Wednesday. On Monday night, nine members of two families including Fiyak’s were butchered. Entire Miklajung is in a state of shock following the murders. Photo: Republica

PACHTHAR, May 23: The brutal Miklajung murders have greatly unsettled the locals. On Wednesday, they were not to be found carrying out their daily activities as normal.

“It used to be peaceful in the village. Even if conflicts occurred sometimes, it was never like this,” said local businesswoman Kumari Manglaak “This is all very shocking and we will never get over it.”

After preliminary investigations police have fingered the man “who hung himself after killing nine people”. Some wonder whether that could be true.

The incident has left some locals in tears. What is so disturbing is the murder of innocent children, according to another local, Dujan Fiyak. Among the nine killed, four were below 15.

Fiyak said, “The incident should be probed from different angels.”

Meanwhile, DSP Narendra Kunwar informed that things would become clearer after the postmortem reports are in. A huge police team has been deployed at the crime site.

Bodies of Miklajung victims handed over to kin after postmortem

DHARAN, May 23: After postmortems at BP Koirala Hospital in Dharan, the bodies of all victims of the horrific Miklajung... Read More...

US dollar soars to an all-time high
25 minutes ago