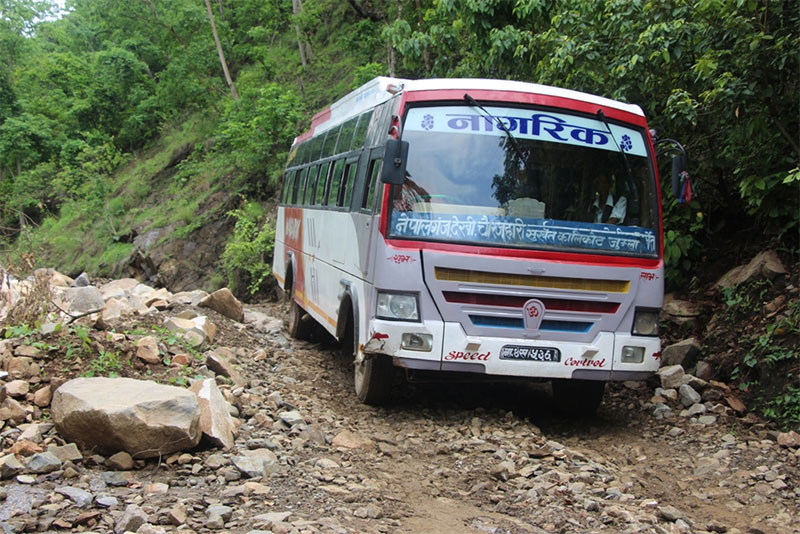 Coming to the fiscal 2015/16, there were 10,013 accidents, with 2006 people dying. In past one month alone more than 115 people have been killed while over 250 others were severely injured in our roads across the country.

The World Health Organization (WHO) dubs road accidents a “hidden epidemic” as 1.3 million people around the world die from them every year, with more than 90 percent victims coming from poor and middle income countries like Nepal.

Road accidents were the ninth leading cause of death in 2004 and could be the fifth by 2030, according to the WHO. In an attempt to make our roads less dangerous, the WHO in 2011 launched a “decade of road safety” with a plan to save five million lives and prevent 10 times as many serious injuries by 2020. As other countries are working to make their roads safer, now is time for Nepal to also look to minimize road hazards.

When road accidents claim 2,000-2,500 lives annually, the government should work with urgency to tackle them. But that is sadly not the case here. According to a report prepared by traffic police, 90 percent of our road accidents can be attributed to the syndicates in Nepal’s transport system, even though law bans such syndicates. For instance the Competition Promotion and Market Protection Act 2006 bans all forms of anticompetitive practices and behaviors, but transport agencies openly run syndicates as it is they who decide route permits and transport fares. They even bar the entry of new players in the field.

A case in point is the fiasco between the Sudur Pashim Yatayat and the recently launched Badimalika Yatayat. As Badimalika started operating deluxe buses, with competitive fares, on the Dhangadhi-Kathmandu route, transport entrepreneurs affiliated with Sudur Pashim resorted to vandalism of Badimalika buses. Such was also the case when Sajha and Mahanagar Yatayat started plying their new buses in Kathmandu to ease commuters’ woes. Nearly all major road routes in the country are controlled by these syndicates, who effectively run a parallel government. They continue to flourish even though the Supreme Court has banned them. This is because there is a close nexus between our top government officials and the operators of these syndicates. Moreover, many politicians have invested in the lucrative transport sector.

There is also the Motor Vehicles and Transport Management Act (1993), which has clear provisions related to road safety, fares, overloading and driver shifts. But almost all these provisions are conveniently overlooked. The transport syndicates can do so as they have political backing.

Apart from cracking a whip on these syndicates, the government should also introduce stringent laws for those who violate traffic rules and it should invest in raising public awareness. But that again does not seem to be a priority. Thus even though the traffic police has repeatedly requested the Ministry of Education to include road safety in school-level curriculum, their pleas have fallen on deaf ears. Likewise, the cabinet two years ago approved new driving license provisions for public vehicles, but they once again could not be implemented due to protests from transport entrepreneurs. If the provisions had been implemented, a public-vehicle driver would need to be at least 25 and he/she would need to undergo three years of training after obtaining license, before he/she was allowed to drive public vehicles.

But these provisions too remain limited to paper.

There are many other measures with which we can make our roads safer, for instance by controlling drunk-driving on longer routes and improving our emergency services in order to minimize fatalities. The total estimated annual loss due to road accidents comes to around 0.5 percent of the national GDP. This isn’t surprising since many breadwinners are badly maimed or killed in road accidents. Hope this issue soon gets the serious attention it deserves.

The gateway to better roads

Finding solutions outside formal planning process for economic and ecological prosperity has become a trend in both developed and developing... Read More...

Bara roads in sorry state, despite allocation of millions of rupees

BARA, Dec 13: Despite allocation of a huge amount of budget for the upgradation of rural roads in the district... Read More...