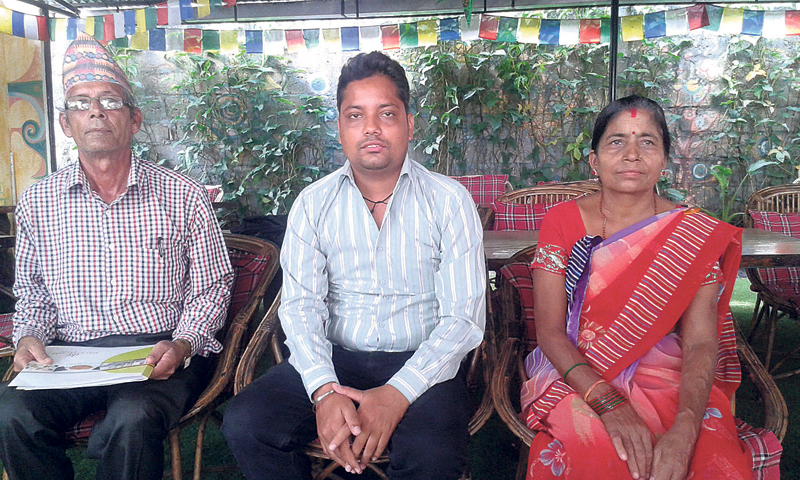 Trilochan, Deepak and Premkala during a press conference in Pokhara on Sunday. ( Santosh Pokharel / Republica )

Father donated kidney to daughter, sister to brother
POKHARA, Sept 12: Tilochan Sharma, 62, was a happy man until 13 years ago. He used to work in Mumbai, India and his family back home in Parbat district was doing quite well.

The only  wish of the father of three daughters and two sons was a bright future for his children. But destiny had troubling  times in store for his family.

Shyamala, Sharma's second daughter, started to develop kidney trouble in 2003. She was diagnosed with a severe kidney condition. And while she was still undergoing treatment, the family was faced with even worse news. Prakash, the eldest son, was told by doctors that both his kidneys were damaged. He passed away 10  years ago without getting proper medical attention.

But the Sharma family's kidney troubles did not end there. Kidney disease surfaced in another member of the family. Six month ago, Trilochan's 51-year-old wife Premkala was also diagnosed with a kidney condition. Three members of the family are currently living with kidney issues, including the  youngest son, Dipak.

Shyamala was donated a kidney by her father, which has saved her life so far. “I donated one of my kidneys to my daughter. But now,  my wife and my youngest son are suffering from such problems also,” said Trilochan.

Dipak, who  is 24,  was diagnosed with the problem five years ago. He has received a kidney from one of his sisters. “ Now, my wife is in need of a kidney too,” Trilochan said.

It is only his daughter Kamala, the youngest in the family, whose kidneys are intact so far.

Premkala is undergoing treatment at the Western Regional Hospital. She has been undergoing dialysis for six months. “Premkala needs a kidney also and I don't know what to do,” Trilochan lamented.

He said he has already spent millions on the treatment of his family. “I sold off all my property in Parbat and came down to Pokhara five months ago,” he said.

“What use is property when you don't have your loved ones? ” says Tilochan. “I must have already spent Rs 10 million so far; I have stopped keeping count,” he added.

Apart from selling his property, Trilochan also raised money on the streets. There was no other option than to beg, he said. “I had to pay for four surgeries during kidney transplant,” he said in a voice drained of all emotion. “I consider myself a refugee now.”

The Sharma family recently met Health Minister Gagan Thapa to seek government support for treatment. According to Tilochan, Thapa assured him of maximum support possible. “He has called us to Kathamndu. and we are going there in a few days,” he said. “I hope for a free kidney transplant for my wife and free medicines,” Tilochan added.

Family appeals for help to save 13-year-old kidney patient

Counting of votes resumes in Udayapur-1, UML boycotts
33 minutes ago