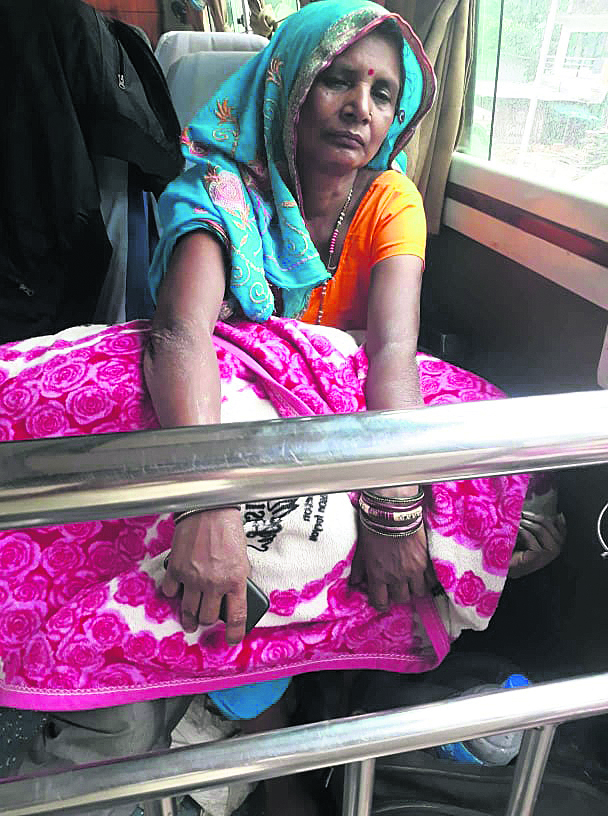 Shreejan Devi Sah with her dead son Rup Lal Sah in her lap in a bus at Naubise on Friday. A kidney patient in need of dialysis, Rup Lal died while their bus was stuck in a traffic jam for several hours Friday. Photo courtesy: Ram Chandra Rupakheti

DHADING, Sept 28: Trapped in a huge traffic jam for hours, a kidney patient in need of dialysis breathed his last right in his bus seat at Mahadevbesi on the Naubise–Nagdhunga road section, Friday.

Rup Lal Sah, 35, was headed for a Kathmandu hospital from his home district Rautahat along with his mother. Their bus (NA 7 Kha 5364) which left Janakpur at 6 pm on Thursday got stuck in a traffic jam from 3:45 am the next day. Sah died at 6 am.

According to his mother, Sah had taken some water and biscuits after the bus got stuck. Suddenly his condition deteriorated and worried fellow passengers and the bus driver started looking for an ambulance.”But he couldn’t be saved. He died while we were still looking for the ambulance,” said bus driver Bhagawan Neupane. “As soon as his condition deteriorated, we tried to find an ambulance, but to no avail,” Neupane added.

A sudden death right in their midst left all the passengers grim and gloomy. Police were informed immediately. Ram Babu Sah, younger brother of the deceased, reached the spot soon after. He happened to be in another bus also headed for Kathmandu.

After collecting the particulars, police sent the body to Rautahat. According to the family, they were too poor to bring him to the capital any other way. Both of Sah’s kidneys had failed three years ago and he had been receiving treatment at Janakpur Hospital. Later, he started visiting Sumeru Hospital near the capital as his condition worsened.

After his sudden demise, his mother Shreejan Devi, 50, lost consciousness. She was in the seat next to her son and had to look on helplessly as he died. The road that was jammed has been under repair since long and is now being blacktopped in view of the approaching Dashain and Tihar festivals.

Excessive inconvenience for passengers due to very long hours of traffic jam had drawn wide criticism since the last few days. Stating that they were not able to manage the situation, the police had even asked the road department to halt the blacktopping work, but in vain.

Friday’s incident has increased the wrath of the public. Let alone passenger buses, even ambulances on emergency runs get stuck in the traffic jams. Ongoing repairs to a serpentine, narrow road has made getting home for Dashain a hellish ordeal for many. According to Sub Inspector Babulal Shrestha of Mahadevbesi Police Post, the blacktopping on the Nagdhunga–Naubise section causes traffic jams stretching 30 kilometers.