‘Kick against violence’ to mark VAW 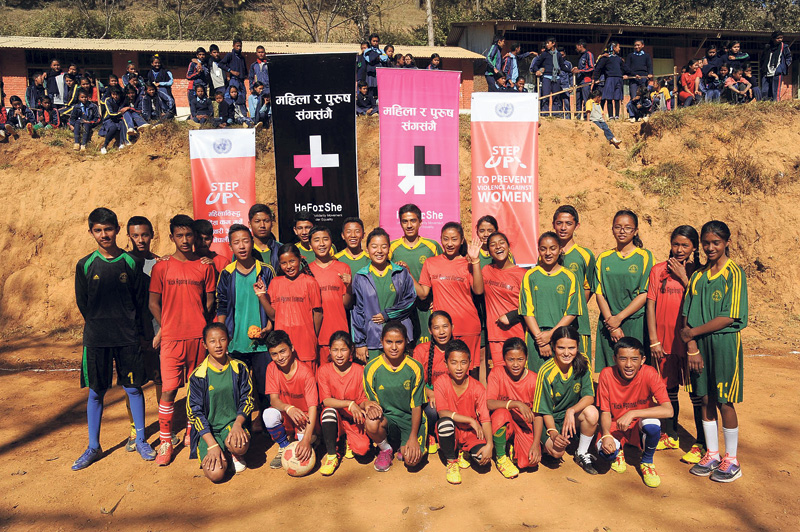 KATHMANDU, Dec 11: ‘Kick against violence,’ a friendly football match, was organized on Saturday at the premises of Sarswoti Madhyamik Vidhyalaya(SMV) in Lele to mark the 16 Days of Violence Against Women (VAW).

The program was jointly organized by UN Women Nepal, Skillshare Nepal and the CG Education.

“In Nepal, football is seen as a male game. But if men can play football, why not women?” asked Puja balami, a seventh grade student at SMV. She is also part of her school’s female football team. “I want to prove that I am a woman and I am strong,” she added.

“Today’s event used football as a metaphor for violence, and both boys and girls kicked the ball to take a stand against violence against women” said Gitanjali Singh, the deputy representative of the UN Women Nepal.

Reflecting on the ‘Kick against Violence’ project being implemented by SkillShare Nepal, Ritu Raj Sharma from Skillshare Nepal said, “We have been working in three schools since 2015 to empower school students and community youth, including both girls and boys to advocate against gender-based violence. We do this by using the power of soccer to educate, inspire and empower young people to speak out against violence against women.”

Violence against men rise with VAW

BHARATPUR, March 9: Various speakers said a spate of incident of violence against men has also increased with the prevalence... Read More...

Do not assume COVID pandemic reaching 'end game', warns WHO
15 hours ago