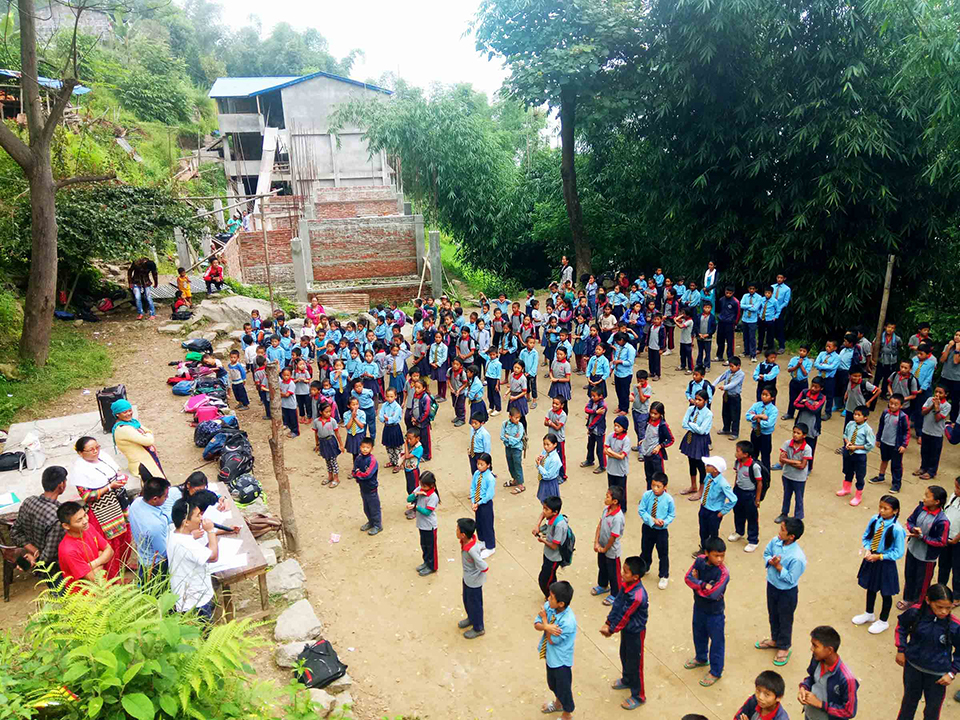 KHOTANG, Oct 4: A decade ago, there was no community school in Khotang that instructed students in English medium. Community schools lagged behind the private schools in other fronts as well. Lack of subject teachers, infrastructures and assets and poor management would discourage guardians from admitting their children to community schools. Joyti Secondary School of Japal in Diktel then decided to make a difference.

In 2008, it trained teachers and changed medium of instruction from Nepali to English. Students were instructed in Nepali language for only Nepali subject, rest of the subjects started to be instructed in English. Though it was not so easy in the beginning, teachers and students gradually embraced the change. After it became the first public school in the district to adopt English as the medium of instruction, students swarmed in here. Even those who had left it for private schools made a comeback.

We were eager to improve the quality of our education provided to the students and professional capacities of our teachers in all possible areas. Our sole objective was to create better teaching and learning environment that would help students to secure good academic results and understanding. --Tika Shrestha, principal of Jyoti Secondary School

But it was not only the medium of instruction that the school wanted to change. To provide quality education and building personality of students required that it should pay attention to other aspects as well. According to its Principal, Tika Shrestha, it was important to develop reading culture among students and the teachers alike. So, the school decided to establish a library and furnish it with a good collection of books for the students and the teachers.

Similarly, the school created environment for students to participate in various sports. "We were eager to improve the quality of our education provided to the students and professional capacities of our teachers in all possible areas. Our sole objective was to create better teaching and learning environment that would help students to secure good academic results and understanding," he says.

Many community schools in the district are not happy with their student's results in the Secondary Education Examination (SEE). The performance of students from public schools countrywide remained very poor in SEE even last year further damaging the image of such schools. However, a handful of community schools had set examples. Jyoti Secondary School is one among them.

"Our students have done pretty well in exams since the implementation of the SEE. We did well even when there was SLC," Shrestha boasts. "Our result was cent percent excellent," he added.

The school's students have been passing school leaving examination with impressive result long. Last year, the school celebrated its student's performance with a grand function. "We had received permission for operating secondary level classes five years ago. So far none of our student has failed in their final exams," Shrestha informed.

For Shrestha, his students are his dignity. They are school's dignity. He says that the school has been able to achieve such results because of the school's guardians' consistent support and genuine concerns.

On the first anniversary of its establishment, Rupakot Majhuwagadi Municipality awarded the school in August. Along with the felicitation, the municipality handed a cash prize of Rs 50,000 to the school.

"We have been awarded 'The Best School Of The Year' title by the municipality. It was a great achievement for all of us. We are proud of it and encouraged further," said Shrestha. "We have been receiving genuine support from all stakeholders. This shows that community schools can thrive if it is able to determine and move in the right direction," he added.

The prize of Rs 50,000 and the title was given for the first time, as the municipality was set just a year ago. Shrestha says that it is remarkable that municipality has noticed the school's performance and awarded it. "This helps change people's mindset to a great deal. This is also a chance to draw children of public servant's to public school. If they start sending their children to community schools, it gives a great message and further paves way for the betterment of education in the country," he noted.

According to Pratiman Rai, chairperson of the management committee of the school, it was important to bring the changes in the school because increasing number of parents were sending their children out of the district for education. They would send them to boarding schools in Kathmandu and other cities. "The trend was increasing. Even parents with poor income were skipping community schools. So, we decided to do something about it," he said. "The medium of instruction was the greatest concern. Everyone wants his or her children to be fluent in English. So, the first thing we did was change the medium of instruction," he added.

He stated that 'parents were searching for schools that taught in English. So, the school availed English in their locality itself, he said. The school is unique also in its uniform. On Wednesday, children wear Daurwa Surwal and Choli Fariya- traditional Nepali dresses for men and women, respectively. On other days, they come to school in dark blue shirt, pant and skirt. "Our students look tidy and smart. Their confidence reflects in their personality as well," proud Shrestha said.