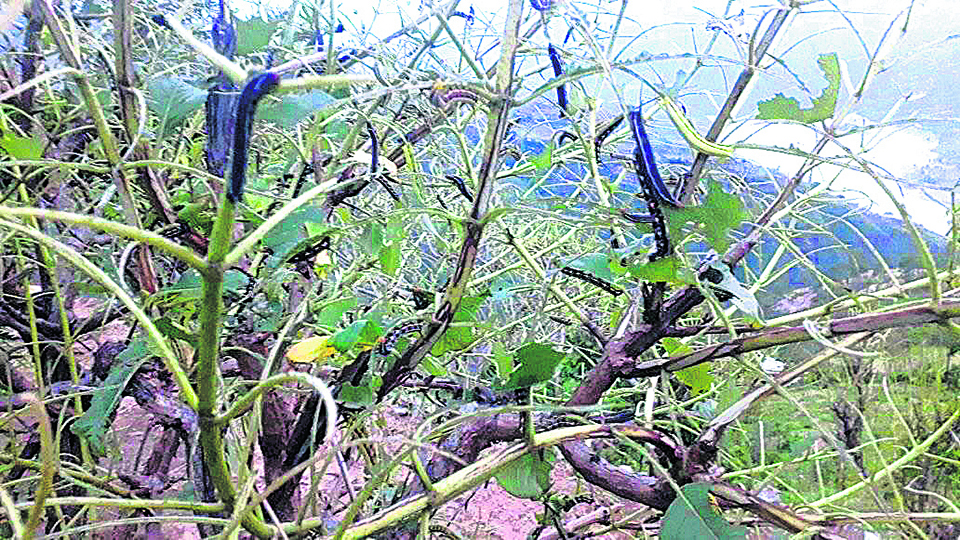 KHOTANG, Aug 21: Farmers in Halesi Tuwachung Municipality of Khotang district are worried as their crops are destroyed by armyworm. The pest that was identified three weeks ago has started to damage crops and forest areas in Bahunidada, Dikuwa, Chyasmitar, and Rajapani of the municipality.

According to Rudra Rai, chairperson of Ward 1 of the municipality, the pest has caused ‘terror’ in places like Maitung, Bayakta, Kaduwa, Kharka, Kurle, Ruptar, and Jhapa of the municipality. The inch-long worm has damaged seedlings of maize and paddy in these places.

Farmers are especially worried as the maize plants they had replanted after the first crop died due to drought earlier this year have again been damaged by the pest.

The pest is shaped like a larva. It is dark green in color with yellow spots and three stripes on its body. It leaves the plants bare after eating up their leaves.

According to Agriculture Knowledge Center (AKC) based at district headquarters Diktel, farmers have been complaining about the pest. The center has been unable to find a measure to control the pest.

“The farmers tried spraying metacid (a type of pesticide) on the crops, but that did not help,” Rai said.

“Armyworm is present in places where the weather is warm. Not only crops in the field, but the pest has destroyed the whole jungle.”

The pest jumps from a place to another when sprayed with metacid. Locals say the pest is rubbery in texture and is found in groups. According to Pushpa Raj Rai, a local farmer, the pest keeps eating the crops non-stop. “The pest has been attacking the plants and crops by covering the land,” Rai said. “The pest becomes active during the night and eats up leaves of crops, plants and trees.”

Iwan Rai, mayor of Halesi Tuwachung Municipality, said that the pest has affected farmers in all 11 wards of the municipality, but it was especially ‘terrorized’ farmers in Bahunidada, Dikuwa, Chyasmitar, and Rajapani areas.

“We are looking for an appropriate method to control the pest as the haphazard use of pesticides can hamper the environment and human health,” said Hari Narayan Rai, an officer at the AKC.

KHOTANG, April 12: At least two persons died and nine others sustained injuries after being struck by lightning in Khotang... Read More...

BANEPA, Aug 15: The government has confirmed the entry of the American fall armyworm in Nepal. ... Read More...