Tribhuvan Army Club captain Bharat Khawash celebrates with his teammates after scoring his 50th league goal during the Martyr's Memorial A-Division League football match against Brigade Boys at the ANFA Complex in Satdobato, Lalitpur on Tuesday.

KATHMANDU, Feb 12: Captain Bharat Khawash scored his 50th top flight goal as Tribhuvan Army Club moved a step closer toward the title after it defeated Brigade Boys Club 3-0 to stay ahead of second-placed Machhindra Club in the ongoing Martyr’s Memorial A-Division League in Lalitpur on Tuesday.

With the title deciding match on the horizon between the departmental team and Machhindra on the final day of this season’s league, Army took a giant step toward its first ever league title as it crushed Brigade on the day.

Machhindra also stays in contention to win the title with a 2-1 win over Friends Club on Monday. A win for Machhindra will see it win its first ever league title.

However, Manang Marshyangdi Club failed in the title defense despite a 2-0 win over another departmental team Nepal Police Club after Army moved four points ahead of the defending champion with just a game left.

Manang's four consecutive draws in mid-season and a shocking 2-0 loss to Chyasal Youth Club decreased the chance of a second straight title, but a win for Army on the day was all but enough to see Manang finish below the departmental team and even behind Machhindra.

Also, Three Star Club, which is already confirmed to  finish behind Army and Machhindra, defeated New Road Team (NRT) 1-0 to stay in course for the top four contention.

However, a win for Three Star in its final match against Chyasal Youth Club and a loss for Manang against Jawalakhel Youth Club will see the Lalitpur-based team climb to the third position.

In the morning kick-off played at the All Nepal Football Association (ANFA) Complex in Satdobato, goals from captain Bharat Khawash, Bikash Tamang and Tek Bahadur Budathoki sealed a convincing win for Army as it registered its ninth win of the season.

Army started the game on attacking note pressing Brigade high up the pitch, dominating the wings and putting good crosses inside the box.

The first chance of the game fell to captain Khawash as his header from inside the box targeting the left side of the post went over the bar in just the third minute of the match, while another header from Khawash from a Santosh Tamang free-kick went off target a minute later.

Khawash then went on to score his 50th league goal as he headed from the left side of the box after a superb cross from George Prince Karki in the fifth minute.

Army had one chance after another, and could not add instantly as Santosh’s right-footed shot from a long distance flew over the bar in the eighth minute. Nawayug Shrestha was the other player to score as his header from inside the box grazed over the crossbar in the 11th minute.

Ashish Shakya was the other Army player to have a shot on goal as his powerful strike from outside the box in the 24th minute went over the bar again.

Army had a lot of chances in the first half, but could not double its lead, while Brigade could not take the ball forward to attack the Army post.

Army scored a goal early in the second half as Bikash converted a superb cross from Santosh with a brilliant header in the 54th minute to double the lead.

Karki had a good chance for Army to score the third goal instantly, but his strong shot from inside the box was brilliantly saved by Brigade goalkeeper Bishal Sunar in the 57th minute. Nawayug produced a cross looking for Karki in the 62nd minute, but he headed wide.

Brigade got a rare chance in the 59th minute, but Roshan Rana Magar was unable to get past Army keeper Bikesh Kuthu in one vs one.

Budathoki then scored the third goal for Army 20 minutes from time, as his fierce shot in the bottom left corner was saved, but then he managed to score from a rebound.

With the win, Army reclaimed its top position again and has 29 points from nine wins, a draw and a loss. Likewise, Brigade sits in the 12th place with eight points from two wins, two draws and eight losses.

In the third game of the day, Bimal Rana and Anjan Bista bagged their sixth goals of the season as Manang got past 10-man Police in a 2-0 win.

Police dominated the possession, but it was Manang’s counter attacking tactics which saw it become the better of the two sides when it comes to attacking stats.

Bimal Rana scored Manang’s first goal of the game as he hit a wonderful shot to the top left corner after a mistake from Police defender Anjan Rai in the 32nd minute.

Bista then converted a header from a Nishan Limbu cross in the 43rd minute to take a 2-0 lead at the end of the first half.

With the win, Manang stays third and has 25 points with seven wins, four draws and a loss, while Police is in sixth with 17 points from five wins, two draws and five losses.

In the other game, Three Star rallied to beat a spirited NRT side 1-0 with Dipesh Ghale scoring the only goal in the 77th minute.

Ghale made a clever turn inside the box to beat NRT defenders and fired a shot to the left top corner to win the game for Three Star. 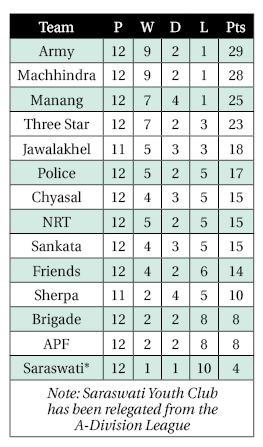 KATHMANDU, Dec 25: Machhindra Club beat Friends Club 3-0 in the third phase of a match on Wednesday under the... Read More...