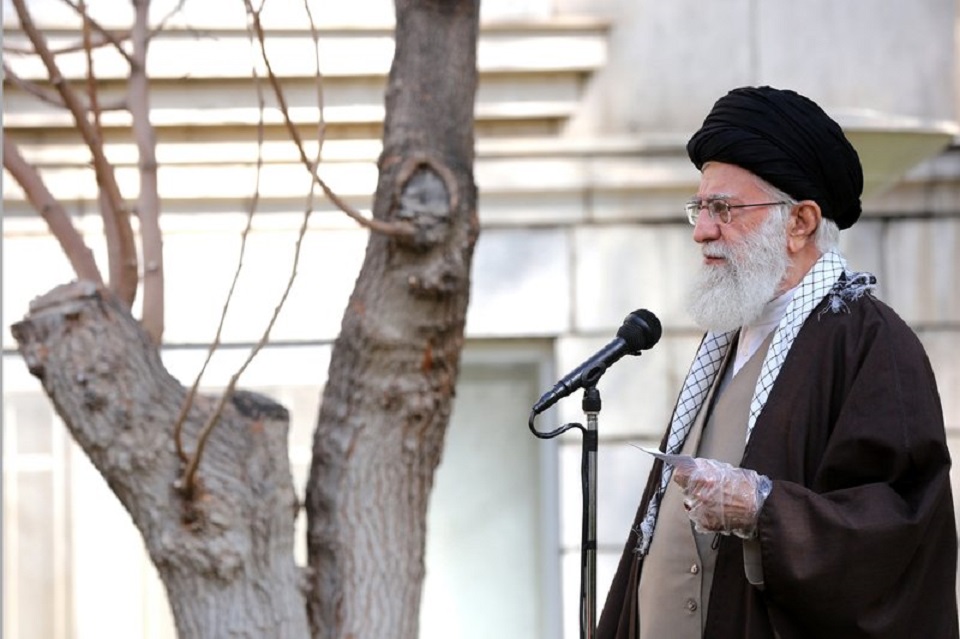 In this photo released by the office of the Iranian supreme leader, Supreme Leader Ayatollah Ali Khamenei speaks during a tree planting ceremony in Tehran, Iran, Tuesday, March 3, 2020. Iran's supreme leader put the Islamic Republic on war footing Tuesday against the new coronavirus by ordering its armed forces to assist health officials in combating the outbreak — the deadliest outside of China — that authorities say has killed 77 people. (Office of the Iranian Supreme Leader via AP)

As part of steps to curb the spread of the new virus that has killed more than 1,100 people in Iran, the country has already released 85,000 prisoners on temporary leave.

Separately, the United Arab Emirates added to its list of people barred from entering all residents who are currently abroad. The decision impacts people whose homes, children, bank accounts and livelihoods are in the country, but who were traveling or outside the country. The ban goes into effect at mid-day Thursday for at least two weeks. Only Emirati citizens are allowed to return.

The UAE, which is home to Dubai and Abu Dhabi, has 113 confirmed cases of the virus. It announced it was suspending all new labor permits, including those for drivers and domestic workers, until “further notice.”

The UAE is unique in that only about 10% of its population, or about 1 million people, are Emirati citizens. The other 90% are foreign residents who fuel its economy and keep the country running. They hold the vast majority of jobs in construction, transportation, hospitality, sales, medicine, education and other key sectors.

The Middle East has some 20,000 cases of the virus, with most in Iran or originating from Iran.

For most people, the virus causes only mild or moderate symptoms, such as fever and cough. For some, especially older adults and people with existing health problems, it can cause more severe illness, including pneumonia. The vast majority of people recover from the new virus.

To encourage people to stay at home in Iran, Health Ministry spokesman Kianoush Jahanpour wrote on social media that the virus infects 50 Iranians on average every single hour and that “one dies every 10 minutes .”

“Make smart decisions about travel, visits and meetings,” he wrote on Twitter, as highways remained crowded with people traveling to see family ahead of the Iranian New Year on Friday.

State TV quoted judiciary spokesman Gholamhossein Esmaili as saying that 10,000 prisoners — among them an unknown number of inmates whose cases are political and related to activism or speech — would be granted amnesty under a decree by Supreme Leader Ayatollah Ali Khamenei on the occasion of the new year, called Nowruz.

Occasionally Khamenei, who has final say on all state matters, pardons prisoners. Last year, he pardoned more than 50,000 on the 40th anniversary of 1979 Islamic Revolution.

Western nations have urged Iran to release dual nationals and others, alleging they are used as bargaining chips in negotiations.

Among those temporarily freed was Nazanin Zaghari-Ratcliffe, an Iranian-British dual national long held on internationally criticized charges. Zaghari-Ratcliffe, who works for the charitable Thomson Reuters Foundation, was arrested in 2016 on charges of trying to topple the government while traveling with her toddler daughter.

In Lebanon, the last commercial flight arrived in Beirut’s international airport from Istanbul late Wednesday just before a lockdown went into effect at midnight for the next two weeks. The government shut down the airport, seaports and borders and ordered citizens to stay home as the small country of nearly 5 million people grappled with containing the virus. Lebanon has recorded four deaths and 133 cases infected cases.

Most private businesses, restaurants and Lebanese government institutions were also ordered shut, leaving only bakeries, supermarkets and pharmacies open, as well as some banks.

In Pakistan, shrines of Sufi saints in the capital Islamabad and elsewhere were closed. Visits to museums, archaeological and tourist sites were banned as the number of cases of coronavirus jumped to 301, mostly among pilgrims returning from Iran.

Two people who were tested positive upon their return from Saudi Arabia and Dubai became the first victims of the virus in Pakistan when they died Wednesday in the northwest.

SIRAHA, March 29: The Siraha Prison administration has released 21 prisoners, in an attempt to prevent the spread of COVID-19... Read More...

Iran releases about 70,000 prisoners because of coronavirus - judiciary chief

DUBAI, March 9: Iran has released approximately 70,000 prisoners because of the coronavirus outbreak in the country, Iranian judiciary chief... Read More...

Imported chemical fertilizers being supplied to districts
24 minutes ago