Khairenighat gets a motorable bridge after 11 years 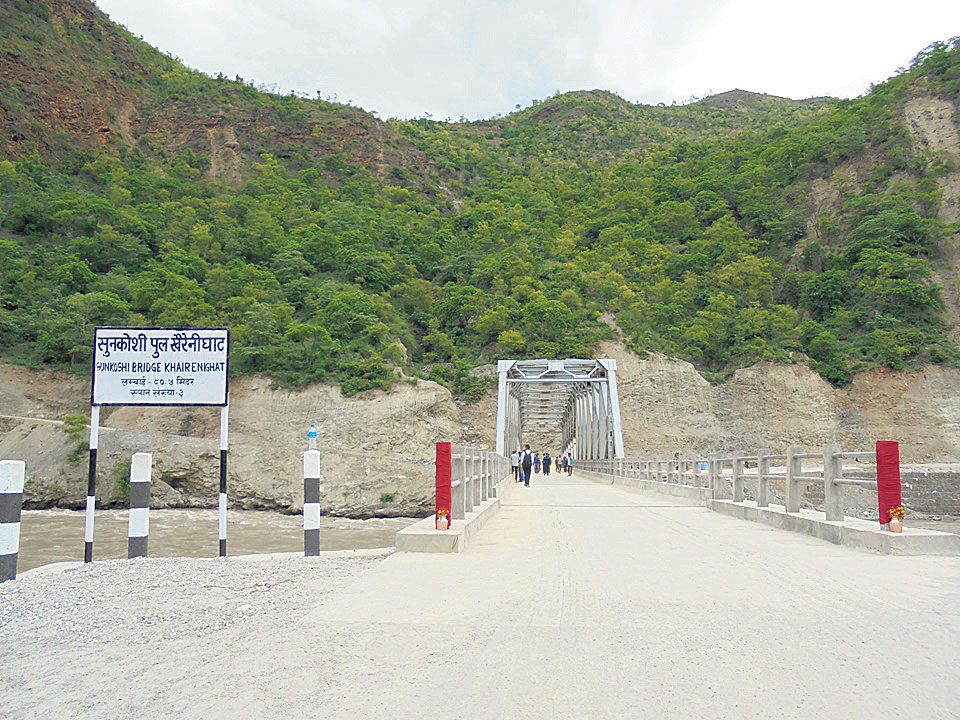 SINDHULI, Aug 6: When he running for the recent local election, Prem Bahadur Tamang, the current chairperson of Khadadevi Rural Municipality, would face just one major question from the locals – “When will the bridge of Khairenighat be built?”

On Sunday, the bridge was finally inaugurated. And it was a historic day not just for the locals but also for the nearby villages.

The bridge that connects Khadadevi of Ramechhap to Sunkoshi Rural Municipality of Sindhuli was under construction since the last 11 years.

The locals had lost hope of completion of the bridge due to the slow pace of work. They would often remark that the bridge would never be completed. But they have been proven wrong.

Due to the lack of bridge, the locals of the rural municipality had to make an arduous journey of 12 hours to reach Kathmandu via Doramba of Ramechhap. Now it takes only four hours to reach the capital.

“Nepalthok is around 20 kilometers away but it was inaccessible due to lack of bridge. But now, it can be reached in minutes. The bridge has brought many places closer. Kathmandu is just four hours away,” said chairperson Tamang. “Even though the tender was finalized 11 years ago, the project gained momentum only after we were elected,” he added.

Kankai/Khampache JV Construction had signed the agreement for the bridge construction on October 16, 2009. However, various reasons stalled the progress for so long.

On Sunday, it was inaugurated by former prime minister and Nepal Communist Party chairperson Pushpa Kamal Dahal amid great fanfare. The bridge is expected to benefit the locals of Khadadevi of Ramechhap, Doramba, Sunapati and Sailung villages.

“We are more than happy. Now this bridge will play a vital role in changing the face of this region,” remarked Chandra Shrestha of Khadadevi Rural Municipality – 1. “We had been facing a lot of hassles in its absence.”

Shrestha has vivid memories of crossing the Sunkoshi River with great difficulty. Sometimes, the river would swell and crossing it meant risking one’s life.

“It was not just my story. Many people you meet here have anecdotes to share about this mighty river. But we had no choice, we had to risk our life to cross it,” he reminisced. “We are happy that our children and grandchildren are spared of that danger.”

In lack of bridge, the locals had been crossing the river with the help of rubber tubes. Many a times, they would slip from the round tube. “Sometimes, people would drown,” Shrestha said.

Using rubber tubes was the only way to cross the river to visit towns. Even school-going children and pregnant women had to rely on such tubes to reach school or hospitals.

Due to the high risk, locals had been pressing the government for quick construction of the bridge. “However, the plea had always fallen in deaf ears. We went through enough suffering in lack of this bridge,” he said pointing finger towards the newly constructed bridge during the inauguration ceremony.

According to Kaman Singh Muktan, chairperson of Doramba Rural Municipality, the bridge is a dream come true for thousands of people in the rural areas. Hospitals, schools, markets, embassies are going to be much closer for them now.

“Kathmandu is not a matter of days, but hours now. That means, big hospitals, universities, embassies are within our reach,” he said.

Meanwhile, Moktan stressed for the need to blacktop the road without any delay. Once this is done, he expects tourism industry to boom in the localities.

“Now we have to focus on developing Doramba and other surrounding villages as new tourism destinations. There are many bright prospects here,” he said.

Farmers are no less happy about the bridge and the changes it will bring. Unlike in the past, their crops and vegetables are not going to rot in lack of market, they assume.

According to a farmer from Khadadevi Rural Municipality Lokraj Ghising, his dairy products, vegetables and fruits will now be sold in Kathmandu.

“ I can take them to Kathmandu straight away,” he said, sounding quite optimistic. “Roads and bridges are lifelines for us. We were deprived of such facilities earlier. Now, we are really happy,” he added.

OKHALDHUNGA, Dec 21: After six years of signing contract, the contractor has resumed construction of bridge over Molung River at... Read More...

Prabhu Bank relocates one of its Banepa branches to Sindhuli