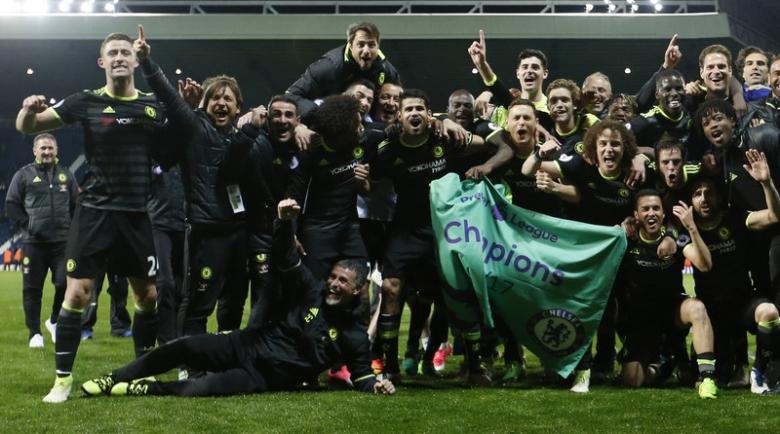 The fact it was Costa and Eden Hazard, both of whose poor form was blamed for Jose Mourinho's sacking the season before, who were on target augured well for the season ahead.

Hazard had to wait until April for his first goal the previous season when Chelsea went from champions to also-rans. Costa also scored a late winner a few days later at Watford.

Sep 24: Arsenal 3-0 Chelsea
The early-season optimism had already been jolted by a home defeat against Liverpool, but this capitulation at Arsenal made Conte's early progress appear to be a false dawn.

Yet the way he reacted to trailing 3-0 after 40 minutes proved the trigger for Chelsea's success.

He replaced Cesc Fabregas with Marcos Alonso and switched to a back three of Davis Luiz, Gary Cahill and Branislav Ivanovic with Alonso and Cesar Azpilicueta as wing backs.

Immediately Chelsea looked more balanced and, though there was no way back on the day, it was a lightbulb moment for Conte.

Oct 1: Hull City 0-2 Chelsea
For the first time Conte began with a back three of Cahill, Luiz and Azpilicueta while he gave a start to Victor Moses at right wing back where he was to become a key part of Chelsea's 13-match winning run.

The new formation gave Luiz the time to start many of Chelsea' attacks, N'Golo Kante to patrol the central areas in workaholic fashion and Hazard to drift around in a free role.

Oct 23: Chelsea 4-0 Manchester United
Jose who? Former hero Mourinho arrived with his Manchester United team but was outwitted by the man now sitting in his chair in the Stamford Bridge dugout.

Pedro opened the scoring after a minute and Gary Cahill made it 2-0 midway through the first half. Hazard and Kante, with his first goal for the club, were on target after the break.

Conte's first win against one of Chelsea's "big" rivals lifted his side to fourth. A couple of weeks later they thrashed Everton 5-0 to go top - a position they never relinquished.

Dec 3: Manchester City 1-3 Chelsea
Outplayed before halftime and lucky to still be in the game, Chelsea displayed their fighting qualities as goals by Costa, Willian and Hazard turned the match around.

Even more significant was the effect it had on Pep Guardiola's Manchester City who went into meltdown with Sergio Aguero sent off for a terrible tackle on Luiz and Fernandinho seeing red after grabbing Fabregas around the throat.

Jan 14: Leicester City 0-3 Chelsea
Having had their winning run stopped by Tottenham Hotspur the previous week, and amid rumours of a fall-out between Conte and Costa, the pressure was on leaders Chelsea.

They got back on track with a nonchalant victory at last season's champions despite the absence of Costa with what Conte said was a back injury. Marcos Alonso scored twice.

March 18: Stoke City 1-2 Chelsea
Chelsea proved that even without Hazard, left out because of a niggle, they could grind out results.

Gary Cahill's 87th-minute winner sparked joyous celebrations in the away end and sent Chelsea 13 points clear of Tottenham who reduced the gap to 10 with victory the day after.

April 22: Chelsea 4-2 Tottenham Hotspur (FA Cup semi-final)
Chinks were appearing in Chelsea's armour after league defeats by Crystal Palace and Manchester United and a buoyant Tottenham arrived at Wembley only four points behind.

Victory for Spurs would have fuelled the belief that Mauricio Pochettino's side could have overhauled the Blues but Conte played a tactical masterstroke, introducing Hazard as a second-half substitute and he duly put Chelsea ahead for the third time in an absorbing tie.

Nemanja Matic struck an unstoppable fourth to knock the stuffing out of Tottenham.

May 5: West Ham United 1-0 Tottenham Hotspur
Tottenham had manfully stayed on Chelsea's tail with some crucial wins and could have closed to within a point had they won this Friday night fixture at the London Stadium.

They faltered, however, and Manuel Lanzini's winner ended their nine-match winning streak in the league. Three days later Chelsea beat Middlesbrough to go seven points ahead with three games remaining - making the title a formality.

Chelsea's win put them 10 points ahead of second-placed Tottenham Hotspur, who have only three games left to play.

Nagarkoti aiming for fourth title of the season