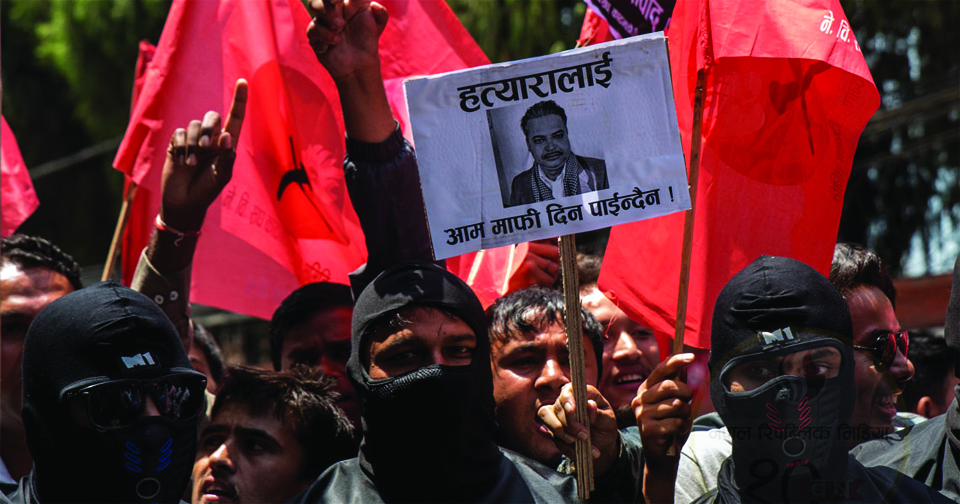 Communist unification has created unease among those affected by Maoist violence

The formation of an all-powerful Nepal Communist Party (NCP) following the merger between then CPN (UML) and CPN (Maoist Center) continues to create rumbles in the Nepali society. But, one area which is conveniently glossed is that of the ongoing transitional justice process. In fact, the blow of unification can strongly be felt by this all-important process. A major actor responsible for fomenting the violence and atrocities during the decade-long civil war is now well placed to lead the country. And the party whose key associational actors (human rights organizations) raised voice against the aforementioned atrocities are partners to the perpetrators of that violence.

In fact, this unification has created unease among conflict victims, especially those affected by the violence unleashed by the Maoists. There have been fears that the new government will leave no stone unturned to weaken the already feeble transitional justice mechanisms. This fear is likely to get compounded with the recent  attempt of the jail authorities to ensure clemency for former Maoist lawmaker Balkrishna Dhungel who is serving much delayed jail time for murder of Ujjain Shrestha of Okhaldhunga. Even though court documents revealed that the murder was carried out of personal reasons, Dhungel’s former party continued to claim that this was a political murder which occurred during the war.

What will be the consequences if Dhungel is released? First, the apex court will be rendered ineffective giving enough room for impunity to be further institutionalized. This in addition to the fact that judiciary post-republic has seen rapid increase in the process of partyfication.  Second, the failure to abide by the institutional process will not only shatter the confidence of the affected parties but also likely push them towards seeking more radical options such as resorting to violence themselves. Third, and probably most important, it will create a vicious circle of impunity and criminalization of politics and politicization of crime. Remember that Dhungel, a close associate of former Maoist ideologue Baburam Bhattarai, did not quit the Maoist party even as the latter did so in the hope that the party would shield him from possible prosecution.

What happens to Dhungel could well be a litmus test for the incumbent government. If the former lawmaker is given clemency—grounds for which are weak as he is serving jail term for murder—then the unholy nexus of those in power with those committing crimes protected by former will be established again. In fact, the government will give ‘legitimate’ voice to the calls from different quarters within the former Maoist party that the entire process of retrospection for war-era crimes needs to be done away with. This thinking is shared by their former arch enemy and now comrades-in-arms: Nepal Army as well.

While there is much talk focused on the future of neo-elites of Nepali political dispensation, not much seems to be in the offing for the victims, be that of any side. Victims have been given long list of hopes that there will be justice. But, the subsequent efforts of the state don’t concur to this. The government, for instance, criminalized torture in the new criminal code. But it left much to be desired as it doesn’t spell out specificities and has rightly been criticized for failing to meet certain international standards including those laid down by the Supreme Court of Nepal. Further, the two commissions formed after much delay to deal with the transitional justice don’t seem to have many teeth especially on the substantive front. There is some focus on process, which is important. But they don’t seem to come out hard on the results. The very fact that the transitional justice mechanisms are headed by bureaucrats is a telling point on its efficacy.

Adopting a washing-off approach to serious issues such as those of Balkrishna Dhungel will easily signal to those like him that violence perpetuated in the name of politics—be that by the rebels or the state—can easily be done away with as larger political process is made to trump individual grief.

Govt brings yet another policy to keep close tab on foreigners

Former England midfielder Frank Lampard says he will be "in close contact" with his old club Chelsea as he decides... Read More...