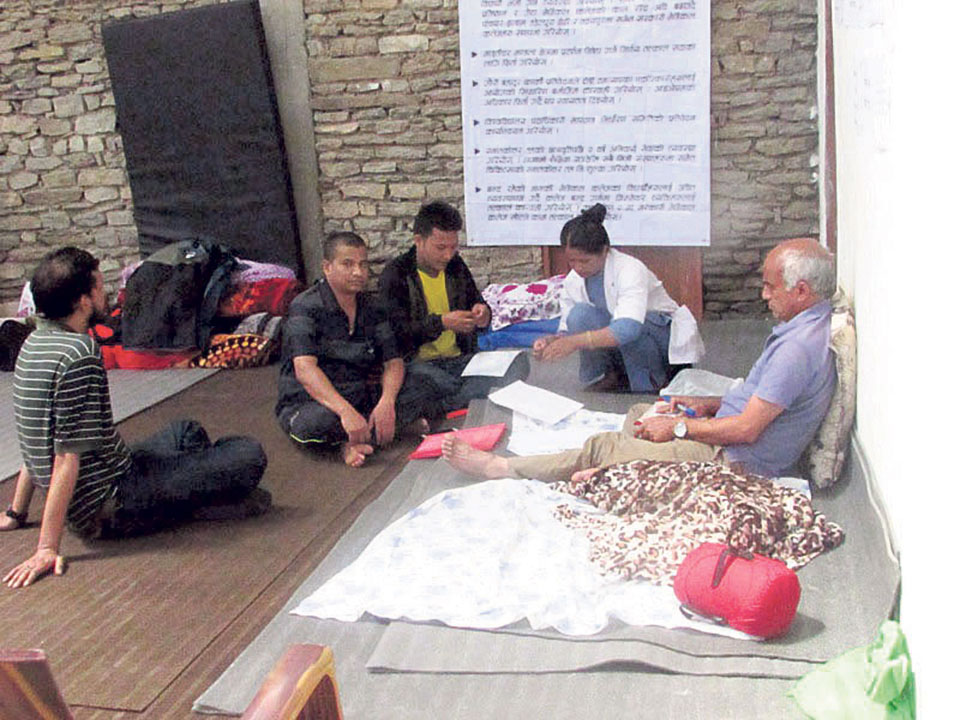 Medical reforms crusader Dr Govinda KC on the second day of his hunger strike at the covered hall of the District Sports Development Committee, Jumla on Sunday. Photo: DB Budha

JUMLA, July 1: A day after senior orthopedic surgeon Dr Govinda KC started his hunger strike, hundreds of people have gathered at the protest site in Jumla’s headquarters Khalanga to support his crusade for medical education reform.

On Sunday, civil society in the district organized a signature campaign to rally support for the crusader for medical education reforms. The campaign is one of the several moves to pressurize the government to address the seven-point demand put forth by Dr KC.

The supporters organized a demonstration at the district headquarters to support their signature campaign. They carried placards with various slogans, including ‘Save Doctor KC’, ‘Citizens don’t have access to cetamol but political leaders use our tax money to receive treatment abroad’, ‘We support Dr KC’s campaign’, among others.

They received overwhelming support from the general public. The large numbers of crowds made it seem like the whole residents of Karnali are united to support the campaign.

A large number of police personnel have been deployed at various nooks and corners of Khalanga. The site of the hunger strike also has a large presence of security personnel.

Saroj Shahi, secretary of Civil Society, Jumla, demanded that police be removed from the protest site of Dr KC. According to him, the police presence has become an undeclared house arrest of Dr KC.

“Security forces have also made it very difficult for visitors to meet Dr KC,” he said.

According his supporters, the hall where Dr KC is on his hunger strike does not have even proper electricity supply. Although he is under constant monitoring by medical personnel, his supporters lamented the lack of proper management for ensuring Dr KC’s well-being.

While Dr KC had initially planned to stage his hunger strike at Karnali Academy of Health Sciences (KAHS), the district authorities declared a ban on any kind of protests including hunger strike, agitation and demonstration within 200 meters of the District Administration Office, the district police office and the KAHS.

Dr KC was arrested for breaching the prohibitory order on Saturday, following which he started his fast-unto-death in police custody at District Police Office, Jumla. However, after protests by supporters, he was subsequently released and taken to the hall of the District Sports Development Committee.

Dr KC’s demands include endorsement of Medical Education Ordinance Replacement Bill without changes, among others.

KATHMANDU, Oct 10: Solidarity for Prof KC Alliance staged demonstration in front of the Commission for the Investigation of Abuse of... Read More...

KATHMANDU, 24 July: Solidarity for Dr Govinda KC Alliance has announced to stage a bigger protest outside Commission for the... Read More...