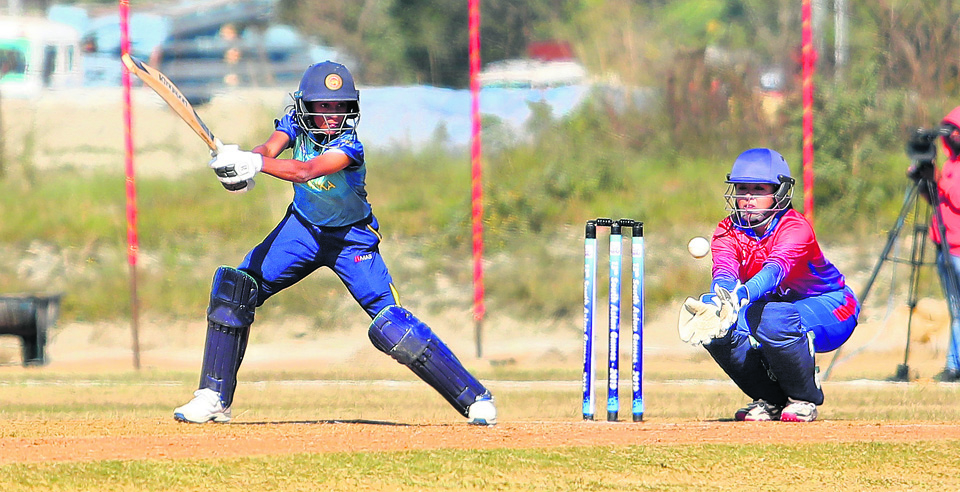 Players of Nepal (right) and Sri Lanka in action during the women’s T20 cricket match of the 13th South Asian Games at the Pokhara Stadium’s cricket ground in Pokhara on Friday.

Nepal was made to work for its runs after Maldives bowled well until last over when KC smashed 22 runs to help Nepal reach a total of 163 runs in 20 overs. Kc faced 16 deliveries and scored two fours and four sixes during his stay. He further bowled four economical overs to limit Maldives to a score of 79 runs for the loss of six wickets in 20 overs.

Sushan Bhari and Lalit Narayan Rajbanshi shared two wickets in their respective economic spells of the day conceding 22 and 18 runs respectively. Similarly, Pawan Sarraf was miserly in his three overs conceding as many runs and dismissing Mohammad Ali Ivan who had faced 39 deliveries to score 11 runs.

Earlier, Nepal had won the toss and elected to bat first.  Nepal kept losing wickets in regular intervals staring at a medicore total at the start of 19th over after Dipendra Singh Airee’s wicket. Nepal had scored 130 for the loss of seven wickets at the point. However, KC collected 22 runs in the last over to help Nepal reach 163 as the home team scored 33 runs in last 11 deliveries. Airee had scored 39 runs of 36 deliveries including two boundaries. Likewise, Gyanendra Malla and Binod Bhandari scored 19 runs each.

Liam Shafeeg was pick of the bowlers for Maldives registering three wickets in the match off his four overs. Likewise, Ameel Mauroof picked up two wickets as skipper Mohamed Mahfooz and Umar Adam shared a wicket each. Nepal has four points after three matches. Nepal faces Bangladesh U-23 on Saturday in a must win match to stay in contention for gold. Maldives will face Bhutan on same day.

Sarkar helps Ban U-23 win by 10 wickets against Bhutan

Soumya Sarkar scored an unbeaten 50 to help Bangladesh U-23 complete its second win of the SAG defeating Bhutan by 10 wickets in a match played at TU Cricket Ground on Friday. The Bangladeshi international smashed five boundaries and three sixes in 28 deliveries. The player-of-the-match Sarkar shared an unbeaten partnership of 74 runs with Mohammad Naim who stayed unbeaten on 13-ball 16 runs which included a boundary.

Earlier, Manik Khan picked up two wickets as Mehdi Hasan Rana, Tanvir Aslam, Minhajul Abedin Afridi and Sarkar chipped in a wicket each to help limit Bhutan for 69 runs for the loss of seven wickets in 20 overs. Tenjin Wangchuk top-scored for Bhutan with a 29-ball 15 runs. This is Bhutan’s third defeat in the SAG cricket. They will face Maldives on Saturday whereas Bangladesh U-23 faces host team Nepal.

Lihini Apsara scored 37 runs off 27 deliveries which included five boundaries to propel Sri Lanka to 118 runs for the loss of seven wickets in 20 overs. Similarly, Janadi Anali scored 35 off 36 deliveries including a four and two sixes. Likewise, Sandeepani chipped in with 29-ball 22 runs.