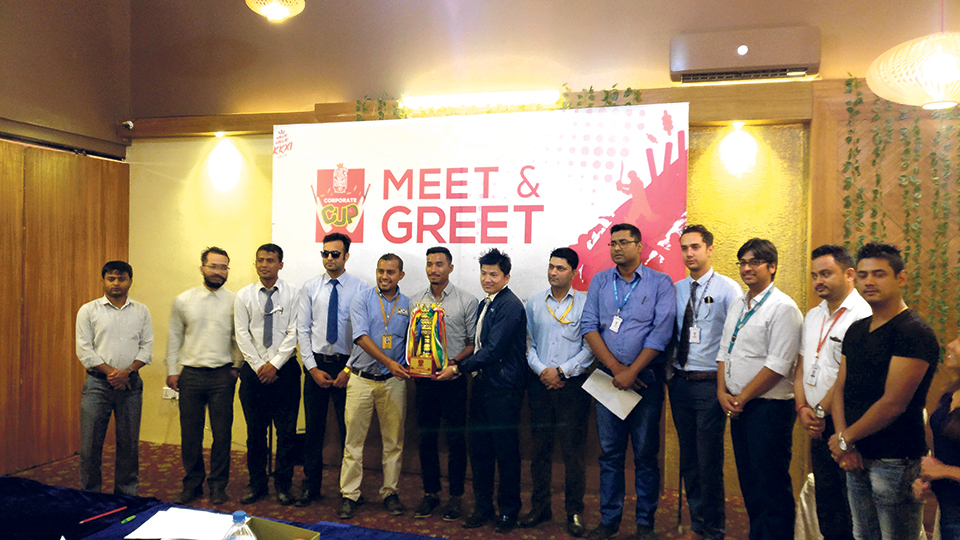 Nepal national cricketer Sompal Kami poses with the Kathmandu Kings XI Corporate Cup trophy alongside the captains of participating teams during a function in Kathmandu on Thursday. | Photo: Rajan Shah/Republica

KATHMANDU, Sept 14: Kathmandu Kings XI, a leading Everest Premier League (EPL) franchise, has announced that it is organizing the Kathmandu Kings XI Corporate Cup from September 17. A total of 14 teams are set to compete at the Royal KCTC Indoor Cricket facility at Golfutar, the club said in a program organized in Kathmandu on Thursday.

In a bid to start a new initiative to develop and promote indoor cricket culture in the country encouraging the corporate professionals to enjoy the sports, Teletalk Holdings, the owner of Kings XI is set to host first of its kind corporate cricket event in the capital.

“We aim to establish this cup as our long term plan to create a cricket friendly environment in the corporate houses,” said Raj Jung Thapa, the Chief Operating Officer (COO) of Kings XI.

NMB Bank, Nepal Life Insurance, Daraz.com and IMS Group were drawn in the Group A. Similarly, the host team Tele Talk, Naya Patrika and United Cement are comprised in Group B. Also, Group C consists of Siddhartha Bank, Global IME Bank, MAW and V-Chitra whereas NIC Asia Bank, Universal Electrocom and Dish Home are pitted in Group D. A couple of teams were not able to confirm their participation in the event which resulted in Group B and Group D having only three teams.

Kings XI is one of the leading cricket franchises participating in the EPL which recruited Sri Lankan Farveez Maharoof as its marquee player in the last year’s event. Similarly, it has already announced Zimbabwe’s Sikandar Raza, Ireland’s Kevin O’Brien and the United Arab Emirates (UAE) skipper Rohan Mustafa as its overseas players for the forthcoming season of the EPL.

Sompal Kami felicitated by Kings XI
Nepal’s ace allrounder Sompal Kami was felicitated by Kathmandu Kings XI on the same program. Kami, who won the player of the match award in Nepal’s first ever one-day international win against the Netherlands, represented Kings XI in the last EPL under the captaincy of Maharoof.

The 22-year-old expressed his disappointment for missing out on the opportunity to play in the Asia Cup with a promise to come back better individually and collectively in the future. “I am honored to be felicitated by the Kings XI. Me, as well as the team, is very disappointed to miss on the Asia Cup but we promise to comeback stronger in future.”

Similarly, the allrounder said that the ODI status belongs to each and every people or fans of the country and tournaments like Kathmandu Kings XI Corporate Cup will help cricket alive and thriving in the nation. “There is an unmatched passion for cricket in this country. This ODI status belongs to everyone in this country. The tournament like this will help connect people from different background and fraternity enjoy and learn about the game of cricket,” said Kami.

Five killed, 37 others injured in bus-truck collision in Kohalpur
23 hours ago
Wonderful Ilam where culture and nature compliment each other
12 hours ago