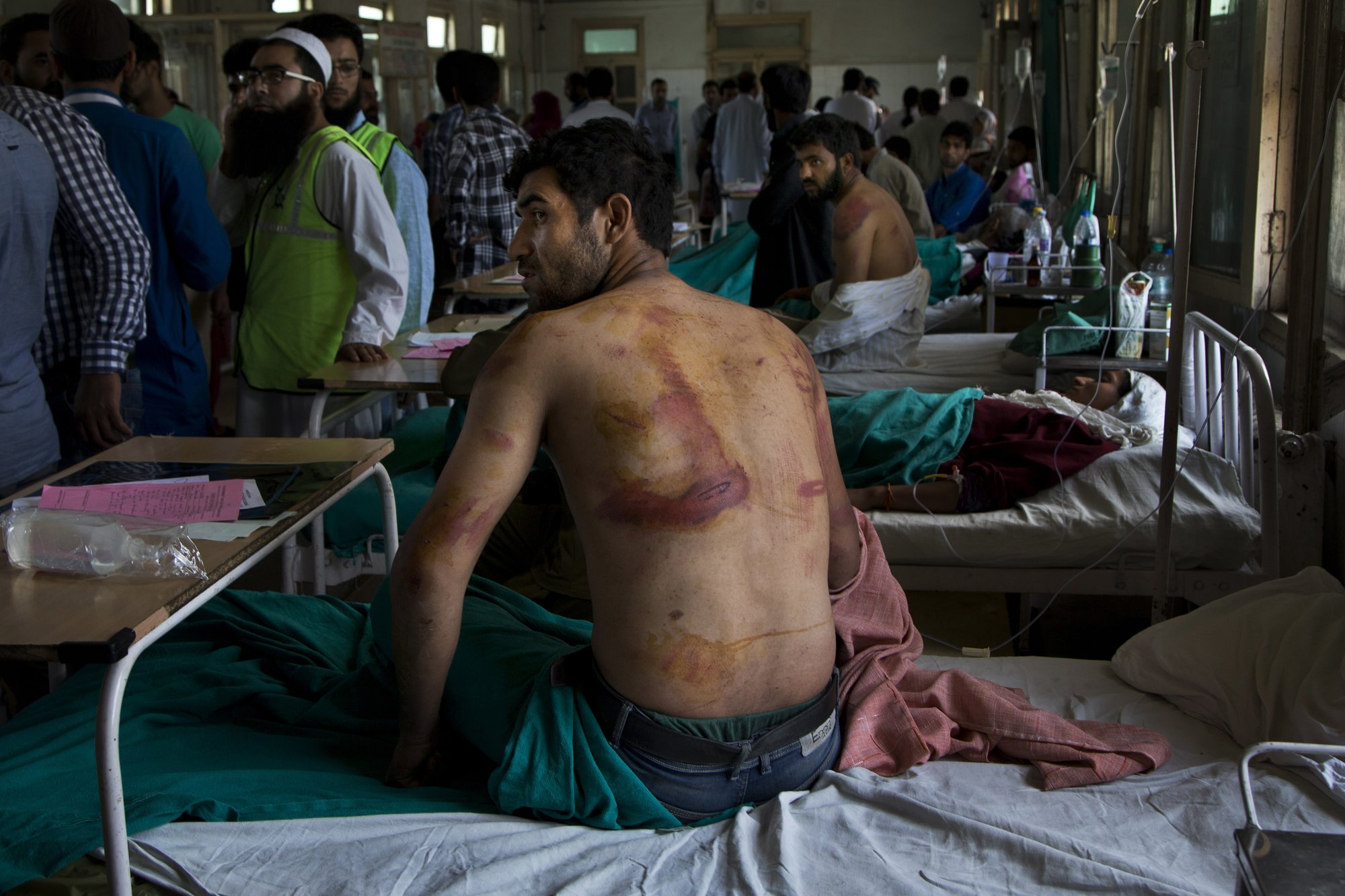 FILE - In this Aug. 18, 2016 file photo, Sameer Ahmed, a Kashmiri man allegedly beaten up by Indian soldiers at Khrew village, recovers at a local hospital in Srinagar, Indian controlled Kashmir. A prominent rights group in Indian-controlled Kashmir is advocating United Nations to establish a commission of inquiry to probe endemic use of torture by government forces who have faced decades long anti-India uprising in the disputed region. (AP Photo/Dar Yasin, File)

SRINAGAR, May 20: A prominent rights group in Indian-controlled Kashmir is advocating for the United Nations to establish a commission of inquiry to investigate what it calls the endemic use of torture by government forces who have faced a decades-long anti-India uprising in the disputed region.

The Jammu-Kashmir Coalition of Civil Society on Monday released a detailed report saying India is using torture as a “matter of policy” and “instrument of control” in Kashmir, where rebels have fought Indian rule since 1989.

Indian authorities said they would study the report before commenting on it. In the past, officials have acknowledged torture exists in Kashmir but have denied that Indian forces strategically use sexual and other abuses to control the population.

The 560-page report, researched for a decade, recommends an investigation be led by the U.N. Office of the High Commissioner for Human Rights. It also urges India to ratify the U.N. Convention against torture and also allow global rights groups “unhindered access” to Kashmir.

Last year, the U.N. in its first report on Kashmir called for an independent international investigation into reports of rights violations like rape, torture and extrajudicial killings in the region. The report, which JKCCS helped with field research, particularly criticized Indian troops for firing shotgun pellets against protesters, blinding and maiming hundreds of people, including children.

The new report includes 432 case studies involving torture and maps trends and patterns, targets, perpetrators, locations and other details. The cases include 293 civilians and 119 militants, among others, and 27 were minors when they were tortured.

“For the worldwide struggle against torture, this report will constitute a landmark,” Mendz, who teaches human rights law at American University in Washington, wrote in the prologue of the report. “I am convinced that a report, when it is as rigorous, evidence-based and persuasive as this one is, constitutes a building block towards public awareness of the tragedy of torture.”

JKCCS has written scathing reports in the past about the brutality by some of the hundreds of thousands of Indian troops stationed in the region and highlighted the widespread of powers granted to them, which has led to culture of impunity and rights abuses. They were first to publicize thousands of unmarked graves in remote parts of Kashmir and demand that they be investigated to determine who the dead were and how they were killed.

Monday’s report said the institutions of the state like legislature, executive, judiciary and armed forces use torture “in a systematic and institutional manner.”

India’s clampdown has a long history in Kashmir and the conflict has existed since the late 1940s, when India and Pakistan won independence from the British empire and began fighting over rival claims to the Muslim-majority territory. The two rivals have fought two of their three subsequent wars over Kashmir, and each administers a portion of the region.

New Delhi initially grappled with largely peaceful anti-India movements in its controlled portion of Kashmir. However, a series of political blunders, broken promises and a crackdown against the dissent escalated the conflict into a full-blown armed rebellion against Indian control in 1989 for a united Kashmir, either under Pakistan rule or independent of both. Since then, about 70,000 people have been killed in the conflict.

Most Kashmiris resent the Indian troop presence and back rebel demands.

India has long seen the Kashmiri struggle for self-determination as Islamabad’s proxy war against New Delhi. Rights groups have also criticized the conduct of militant groups, accusing them of carrying out human rights violations against civilians.

Kashmir is patrolled by military, paramilitary and armed police and remains one of the most militarized regions in the world.

Coils of barbed wire and security checkpoints are common, and emergency laws grant government forces sweeping powers to search homes and make arrests without warrants and to shoot suspects on sight without fear of prosecution.

In the past, the government has said the allegations are mostly separatist propaganda meant to demonize troops. The Indian army previously said it has punished 59 soldiers in 25 proven abuse cases, out of 995 complaints it has received.

According to the report, the methods of torture after the eruption of armed rebellion include stripping the detainees naked, rolling a heavy log on the legs, waterboarding, electrocution including of genitals, burning of the body with hot objects, sleep deprivation, and sexual torture, including rape and sodomy.

“Despite global attention and condemnation of torture following exposés of indiscriminate torture practiced in Guantanamo Bay and Abu Ghraib prisons, torture remains hidden in Jammu and Kashmir, where tens of thousands of civilians have been subjected to it,” the report said.

Apart from advocacy, the report serves “as an institutionalized form of memory of trials and tribulations of the people” of the region, said Parvez Imroz, a prominent rights lawyer and JKCCS president.

KATHMANDU, Aug 24: Pakistan has asked Nepal to play its role as the chair of the South Asian Association for Regional... Read More...