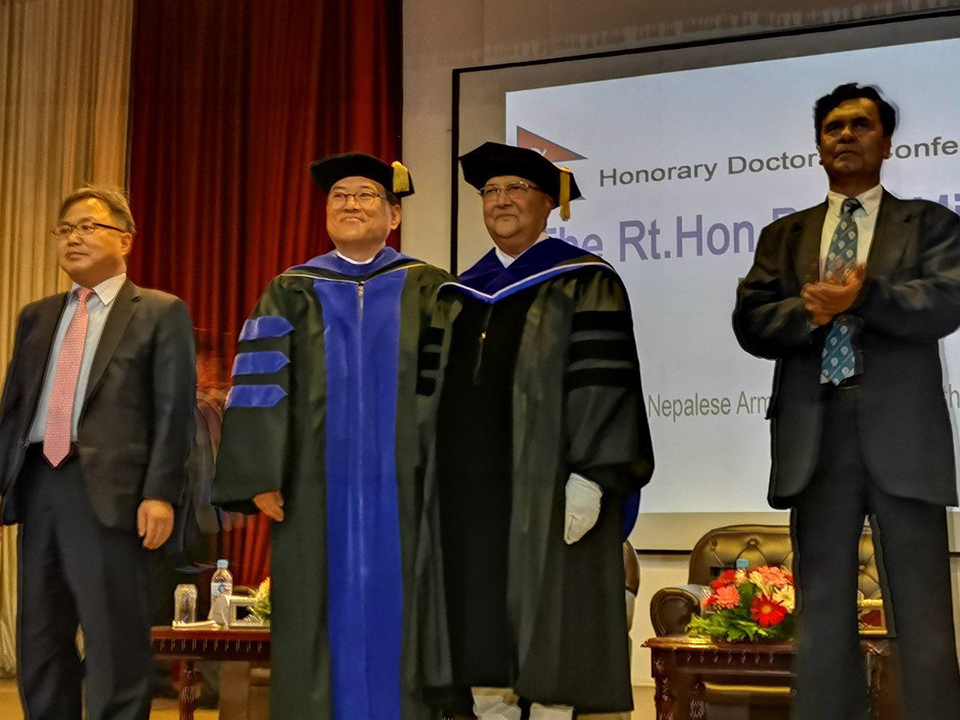 KATHMANDU, May 29: The Kangnam University of South Korea has offered an honorary doctorate degree to Prime Minister KP Sharma Oli amidst a special ceremony in the capital city today.

University President Shinil Yoon conferred the degree on the PM. It is said that the honorary degree in 'political science' was given to the PM in recognition of his contribution to Nepal's political transformations.

After receiving the title, PM Oli said he had taken it not as a personal one, but honour for Nepali people's sacrifices and struggle for political transformations. He vowed to keep the trust that the University showed. The conferment of the academic honorary title has prodded both sides for developing the culture of mutual respect, according to him.

Sating that the Nepal was highly influenced by the progress made by the South Korea, PM Oli viewed that Nepal could learn a lot from it. According to him, the South Korea was a testimony to the fact that an amalgamation of long-range vision, policy, resolutions and efforts could result in positive consequences to the country. Oli said, "We could also develop and propel our country. Among various development models, South Korea’s was one."

Expressing his deep concern over the backwardness of Nepal which he said was ahead from the perspective of historical civilization, PM Oli admitted, "Nepal lagged behind in terms of development for some time but it is moving ahead with right policy and vision. Nepal will not lag behind anymore." University’s President Yoon shared that the honorary doctorate was conferred on PM Oli in recognition of his struggle and sacrifices for the political changes in the country.

He claimed that honorary doctorate conferment on Nepal’s PM was a matter of pride for all the Nepalis as well North Korea. He was confident that conferment would also help further strengthening the ties between Kangnam University and Tribhuvan University.

He said, "PM Oli is now associated with the Kangnam University as its alumnus. Recalling his meeting with Oli some ten years ago, President Yoon shared that Oli was working towards overthrowing the monarchy in Nepal and establish good-governance, peace and stability in the country.” He was confident that Oli’s name would be inscribed in the history as a good leader.

PM Oli conferred with Honorary Degree of Doctor of Science

Himalaya Airlines carries out test flight to Lhasa
28 minutes ago