Kandra Bridge not built even in eight years 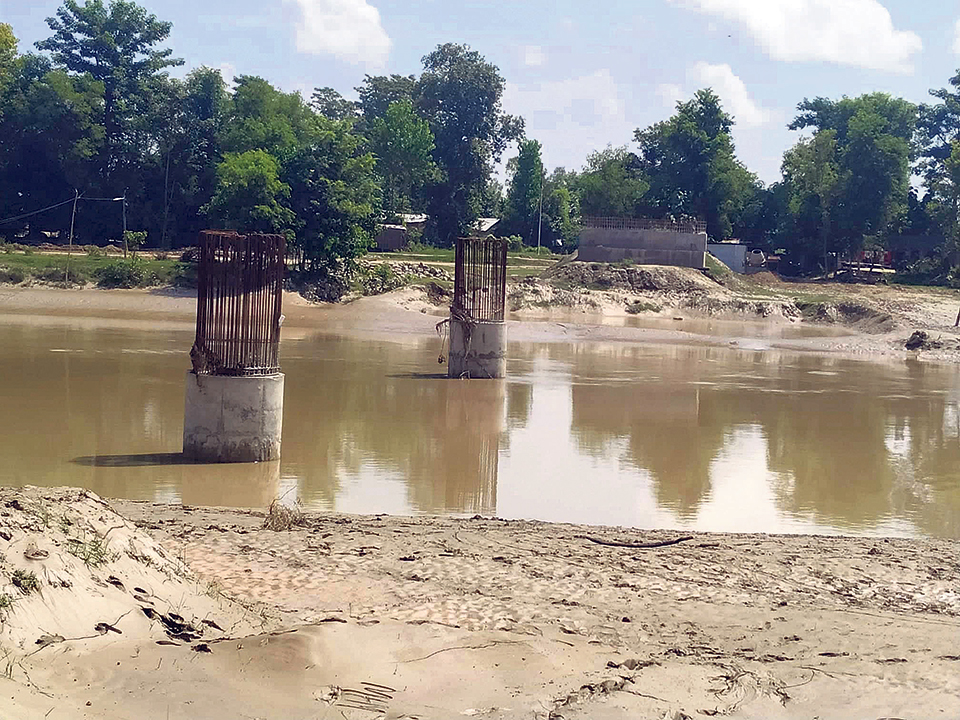 Incomplete foundation of the Kandra River bridge is seen in this recent picture. Photo: Republica

DHANGADHI, Oct 17: Construction of the postal highway has not gained momentum even though it was declared a national pride project by the government. Contractors responsible for constructing various sections of the highway have been missing one after another deadline. This has worsened as government authorities have also been failing to monitor progress of the project and holding responsible parties accountable.

As the project was not completed, the government extended its deadline for the first time in 2013. But the contractor showed no sign of finishing work on time. The deadline was then extended twice again.

According to an engineer with the project Mohan Chandra Hamal, the last deadline was set for 8 July 2018. But so far, only 35 percent of the work on the bridge has been completed.

Lack of a bridge over the river has affected the mobility in the area. People and vehicles are forced to take a very long route to travel a little distance.

“Had there been a bridge, life of the people in this part would have been very easy. We have been waiting for its completion for a long time. But it is still to materialize,” said a local of Dhangadi, Arati Chaudhari. “This made it very difficult for people, mostly for the children and elderly ones,” she added.

According to locals, their villages remain isolated during rainy days in lack of proper roads and bridges. Kandra River needs to be crossed frequently.

“Kandra River is mostly flooded during heavy rainfall. Lack of bridge over it, means our movement is controlled,” said Chaudhari.

Padam Bahadur Madai, information officer and engineer with the highway project stated that the delay was due to wrong design of the bridge prepared at the start of the project.

“The contractor initiated the project but it was again brought to a standstill,” he said. “Deadline was extended time and again, but yet the project has not picked up pace,” he added.

A contract of Rs 4.2 million was given to the contractor for constructing the bridge. However, considering the extended period, final cost of the project is expected much more, Madai said.

Engineer Hamal also said that projects that do not complete on time incur higher expenditure. The bridge may not get completed with the initial estimated cost.

“On several occasion we have urged the company to come in our contact. But they have not heeded to our pleas,” said Hamal. “We have sent them letter many times,” he added.

According to Hamal, the company has even been notified about the possible fines and departmental actions for the delays. However, the contractor is still out of contact.

Lack of bridge directly affects the people of several wards of Bhajani Municipality. Locals sometimes use a temporary wooden bridge to cross the river. But that is not free of risk. According to Chaudhari, there have been accidents.

As a part of the postal highway, bridges were also to be built over Kanari, Pawera and Kataini Rivers. After several deadline extensions, those bridges are now almost complete, Hamal said.

“They did not meet deadline either. The deadline was extended several times. But now, they are almost complete and are likely to be handed over to the local body soon,” said Hamal. “Once they come into operation, it will be very easy for people,” he added.

Although the authority puts all the blame for sluggish development of ambitious projects, many locals are not ready to buy this excuse.

A staffer at the road project stated that contractor does not fear of actions from authority concerned, because the latter do not take action on time.

“Or else, if they go by law, defaulting contractor can be charged heavy fines and could be blacklisted. But who would do that?” he said, requesting anonymity.

Postal highway is one of the oldest projects in the country and runs across the Tarai region from Jhapa to Kanchanpur district.

KATHMANDU, June 25: Delays and dilly-dallying in infrastructure projects had stopped to some extent following strong moves taken by Minister for... Read More...