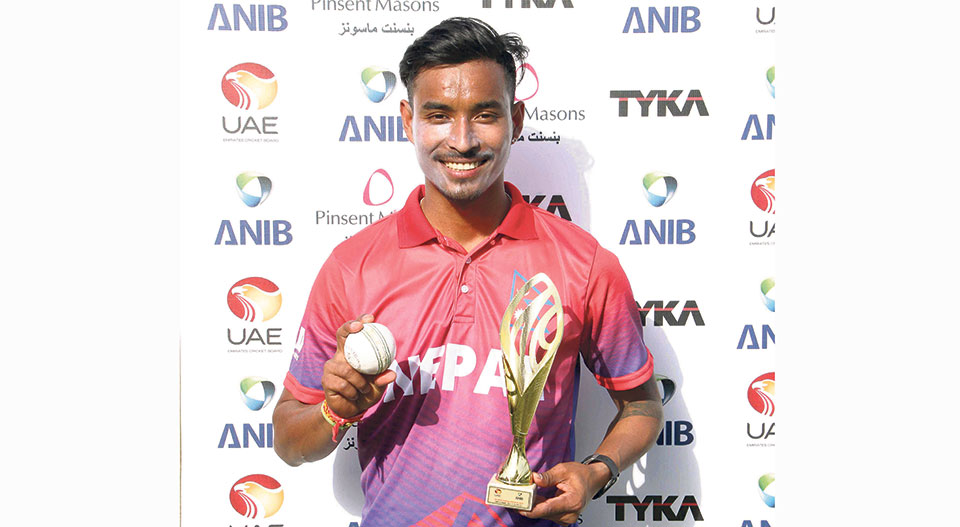 Nepal national cricketer Sompal Kami pose with the match-ball and the player of the match trophy after his side’s ANIB Challenge Series second one-day international (ODI) match against the United Arab Emirates at the ICC Academy in Dubai on Saturday. Photo Courtesy: Raman Shiwakoti

The leg-spin sensation Sandeep Lamichhane picked up four wickets, second best bowling figures for Nepal in ODIs, to help wrap up the UAE innings for 97 runs in 19.3 overs.

Kami dismissed four top-order batsmen to reduce the host team to 29 runs for the loss of four wickets at 6.1 overs. In fiery spell by Kami, Chirag Suri was clean-bowled for golden duck, wicket-keeper batsman Ghulam Shabber was caught out by Aarif Sheikh for two runs and Shaiman Anwar was trapped LBW for 9-ball duck. Similarly, Ashfaq Ahmed who looked in good touch scoring 20 runs off 17 deliveries was caught and bowled by Kami to claim four out of first four wickets to fell in the UAE innings.

Likewise, Lamichhane joined the party picking up four wickets to reduce the home side to 88 runs for nine wickets at the end of 18.5 overs. Lamichhane removed debutant CP Rizwan for 16 runs, top-scorer for the UAE, Muhammad Usman for 26 runs, Fahad Nawaz and Amir Hayat for ducks to further exaggerate the poor batting performance. Kami came back for his last and final spell of the match to dismiss number 11 batsman Zahoor Khan for eight runs to complete his first five-wicket-haul in ODI cricket supported by Lamichhane’s second best figures in Nepal’s short ODI career which spans for five matches since acquiring the status in 2018.

Earlier, Nepal won the toss and elected to bat first as Rohit Paudel scored a record-breaking half-century to lift the visiting team to 242/9 in ICC Academy, Dubai on Saturday.

Paudel scored 55 runs on route to becoming, at 16 years and 146 days old, the youngest male player to score more than 50 in any international format. His knock lifted Nepal struggling at 113/5 to 242 at the end of 50 overs for the loss of nine wickets.

Nepal opening batsmen Gyanendra Malla and Binod Bhandari scored 61 runs together. It was the biggest partnership in ODI cricket for Nepal only to be broken later in the same innings.

Bhandari scored 21 runs, nicking to slip off Amir Hayat before Malla slapped a good length ball from Zahoor Khan straight to the man at mid-off for 44 runs.

Paudel and Aarif Sheikh then put on a crucial 82-run partnership for the sixth wicket. Paudel's 58-ball knock featured seven fours as he scored 55, while Sheikh scored a more sedate 49-ball 29 before falling LBW to Haider becoming the bowler’s third victim of the day.

Paudel too was dismissed by Amir Hayat, caught by the keeper as he nicked an attempted big shot in an attempt to accelerate the innings toward the end overs. Quality cameos by Karan KC scoring 18 runs from 11 deliveries which included two sixes and a four and Lamichhane’s unbeaten 14 runs helped Nepal put up a respectable total.

Haider and Hayat shared three wickets each supported by skipper Mohammad Naveed, Zahoor Khan and Ashfaq’s a wicket each in the match.

Kami speaking after the match expressed to have adjusted line and length in the second ODI to be able to take wickets. “The pitch was quite different than yesterday. The usual short deliveries which were difficult to play in last match got easier to face today. So had to adjust in my line and length after the first over and kept it full at the stumps line. I am happy that it worked for me and whole team contributed for the big win,” he said.

Similarly, the 22-year-old also shared his thoughts on his playing role for the team in days to come. “My batting position depends on the requirements of the team. It was discussed that I will bat at four if we lose quick couple of wickets within first 10 overs. So, I am comfortable to contribute likewise in coming days as well and help team win the series on Monday.”

Nepal and the UAE will lock horns again on Monday for the third and final series decider match in same venue.

After that, Nepal and the UAE are scheduled to play three-match T20I series in Dubai from Thursday. 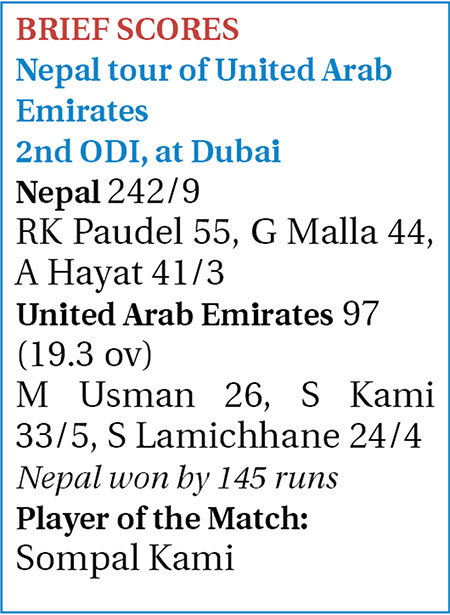