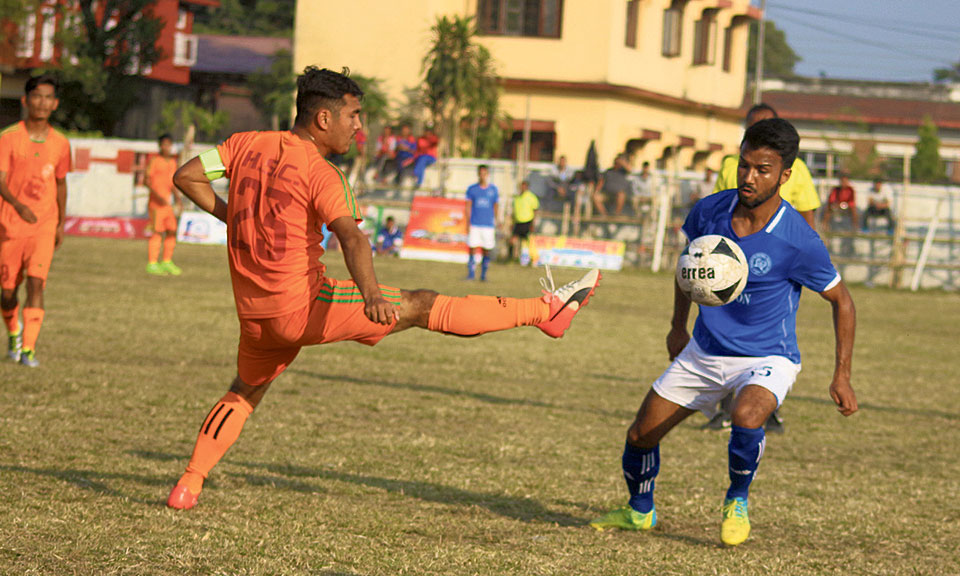 Players of Himalayan Sherpa Club (orange) and Kakarbhitta Football Training Center in action during a quarterfinal match of the Kakarbhitta Gold Cup Football Tournament in Kakarbhitta, Jhapa on Monday.

Nirajan Khakda’s only goal of the match was enough to decide Kakarbhitta’s last-four berth. He scored from a free kick to give his team the win over HSC.

Kakarbhitta were rewarded the free kick when HSC’s African defender Sayed Mogan fouled Aaron just outside the box in the 22nd minute. Nirajan scored the free kick from 22 yards out giving HSC’s goalkeeper Arpan Karki no chance to save it.

HSC could not get back to the game despite playing a passing football. Kakarbhitta’s defenders Florence, Bishnu Sunar, and Saroj Sunar prevented HSC’s strikers to get a goal in the match.
HSC could not utilize four chances they got and could not score a goal. Likewise, HSC’s defense also presented a solid performance and did not let Kakarbhitta’s strikers finish the opportunities they got to score in the match.

Kakarbhitta’s skipper Khamir Gilson Kondogba missed a golden chance to score in the seventh minute of the match. Prakash Budathoki gave a pass to him when he was unmarked but his shot was easily saved by HSC’s goalkeeper. HSC’s defenders again blocked Nishan Limbu’s shot near the post in the 21st minute. Nishan again missed a chance in the 48th minute when he kicked the ball out of the frame.

On the contrary, HSC attacked only once in its opponent’s post in the first half. Tridev Gurung controlled the ball from a pass of Binod Gurung, but Kakarbhitta’s goalie Alan Neupane easily saved his shot. Saujan Rai hit the ball out of the post in the 52nd minute and Bhuwan Basnet could not direct the ball goalwards in the 75th and 77th minutes.

Nirajan, who scored the decisive goal, was declared the man-of-the-match.