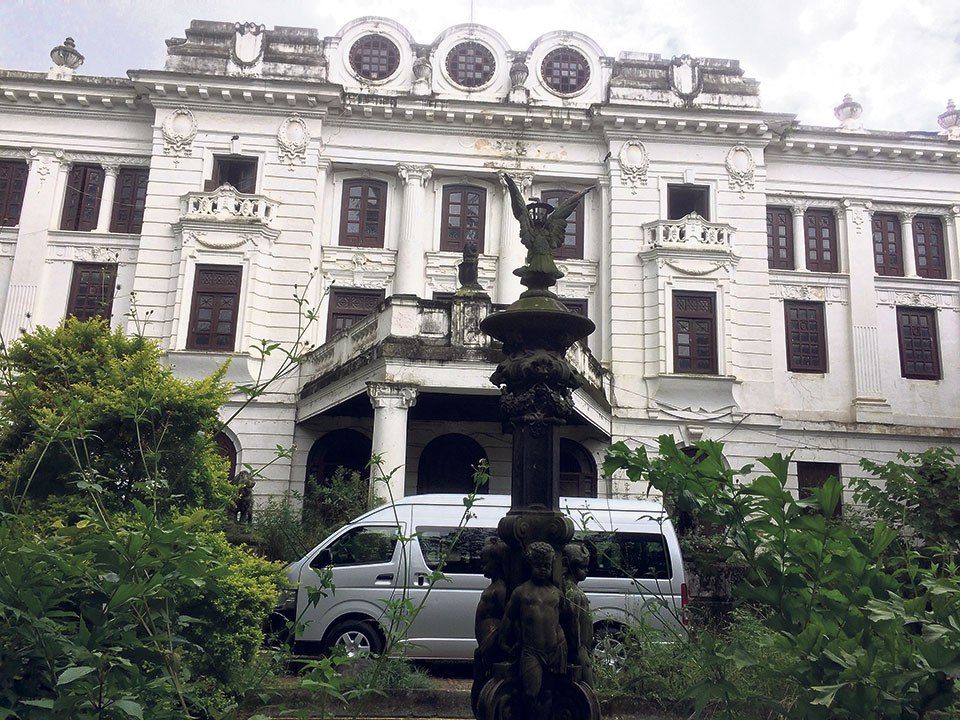 KATHMANDU, Sept 4: Around 60,000 books including some rare manuscripts have somehow been stuffed into two tiny, congested rooms in the Kaiser Library. Severe damage to the library in the heart of the capital during the April 2015 earthquake has left the upper part of the historical building completely inaccessible. The Thamel-based building, which lies to the west of Narayanhiti Palace Museum across the road, has developed multiple cracks. Leakages are no longer uncommon during the monsoon, risking damage to the valuable books that the library owns.

The Kaiser Library, one of the most significant legacies left behind by then Field Marshal Kaiser Shumsher Rana, is more than just a library. With countless antiquities, animal trophies and paintings dating back to Kaiser Shumsher's early life in the late 19th century, the library also resembles a museum. However, the 2015 earthquake hit the library like a whirlwind, destroying many historical documents including newspapers and leaving the upper part of the building in ruin.

The library now suffers from a chronic space crunch. After the earthquake, all the remaining books had to be shifted downstairs, leaving almost no reading space for the readers. This mismanagement has significantly reduced the number of visitors.

Yadav stated that serving this declining number of visitors has also become a major hassle with only the ground floor fit for usage.

“We have tables and chairs but we don't have space,” Yadav said.

Mausam Dahal, a librarian, said that the government had initially placed a yellow sticker on the building. The upper storey has been completely banned from entry.

“We are doing our best with the limited rooms we have,” Dahal said, adding, “We even order in books that we don't have upon the request from our readers.”

She said that they haven't been able to provide quality service they used to before because of the very limited space available.

Srijana Mishra, a student preparing for the MBBS entrance exam, is a regular at the library.

“I can focus and concentrate here thanks to the lovely environment and understanding librarians,” Mishra said. She added that resources are also abundant here and of extreme value to her and other students alike.

Books at the library have been divided into three sections: Old collection which encompasses Kaiser Shumsher's private collection, new collection of English books, and new collection of Nepali books. According to the library operators, there are over 60,000 books, documents, periodicals, and manuscripts in the library. The books cover a wide range of subjects including philosophy, religion, astronomy, social science, military science, game, hunting, gardening, medicine, literature, history and biography. Moreover, the library is constantly adding new resources to its collection.

“A manuscript called Sahattartantra is over 1200 years old,” Yadav said, adding, “We also own many rare books that can't be found anywhere else.” Besides these, many significant paintings, photographs, old maps, and press cuttings are also a part of the library collection. Resources for students preparing for the exams of Public Service Commission, MBBS, engineering, etc are very handy. Moreover, the library also provides free Wi-Fi service to its users.

The old collection alone contains approximately twenty-eight thousand volumes of books and documents that cover a wide range of subjects. The building is itself of extreme architectural value, inspired by the neo-classical European design, while the library premises contain numerous statues, paintings, furniture, and huge mirrors. Based at a prime location in the heart of the capital city, this library is of utmost historical and architectural importance.

Our picks: The best of 21st century’s non-fiction

Most stories are highly imaginative and thus able to conjure things that are beyond the natural world. And that, of... Read More...

WASHINGTON, Jan 8: Trump administration officials and allies are rallying to the president’s defense, trying to contain the fallout from... Read More...

KP Oli is the leader of a small faction: Madhav Kumar Nepal
22 hours ago

Three killed in a road accident in Solukhumbu
5 hours ago