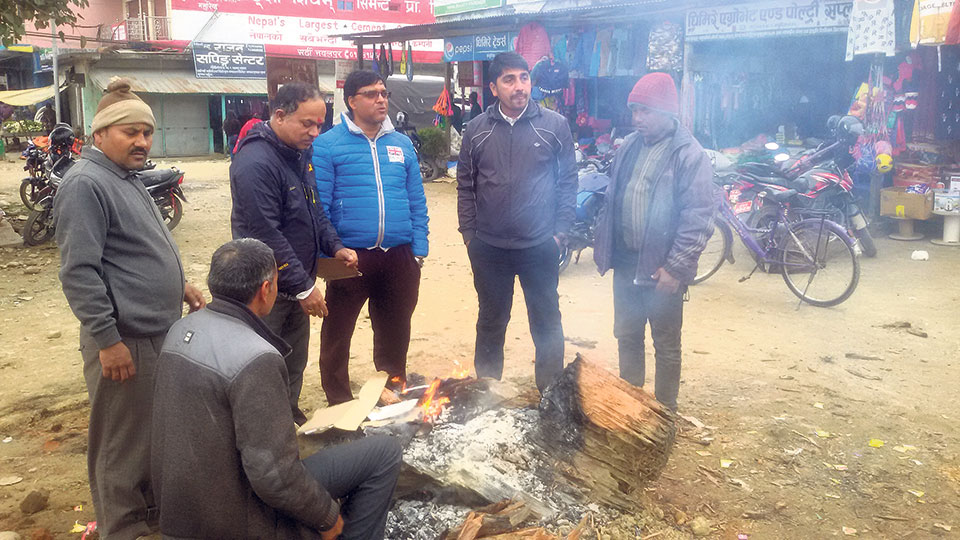 KAILALI, Jan 12: Amid limited facilities and arrangements, locals of Kailali have found it very hard to cope with the chilly weather. The dipping temperature and cold waves have hit their daily routines. The locals are seen around fire lit at crossroads and market places even during the daytime.

"People have found it very hard to carry on. Cold wave has hit them hard," said Hari Prasad Tiwari, chair of Gauriganga Municipality – 9.

"Not everyone has full arrangement to fight the winter blues. Warm clothes and other stuffs are still a problem for many," he added.

In order to ward off the cold, the municipality has been distributing firewood for free, Tiwari informed. Some people have arranged wood on their own. According to the Department of Meteorology, the minimum temperature in Kailali was recorded at 9.9 degree Celsius on Saturday. Since the last few days, temperature in Kailali has been almost constant, according to the department.

"People gather everywhere from teashops to eateries and at crossroads and markets and then light fire. They have no other way to brave the cold," Tiwari noted. "They have taken a break from their usual routine due to the harsh weather. Children are not going to school, elders are not at work," he added.

According to Singal Chaudhari, an official at the Department of Meteorology in Attariya, the far western region has experienced unexpected weather since the last three weeks. "It's snowing in the mountains, and the cold has arrived here," he said.

Some schools in Gauriganga Municipality and Godawari Municipality, among other areas have been shut due to the adverse weather. On the other hand, health posts and hospitals have witnessed rise in the number of patients. Cold, cough and fever have bothered people a lot.

According to Tiwari, the lack of proper houses, warm clothes, and other arrangements have made it hard for people to cope with the extreme weather.

"It's hard for poor families to get through this extreme weather," he stated.

Prime Minister KP Oli, speaking at a function organized in Kathmandu on January 30 for the signing of a memorandum... Read More...

Infographics: Extreme weather is the biggest fear around the world

Our biggest fears are often not unfounded and the threats we anticipate shape the decisions that impact our lives. ... Read More...

Canadian citizen busted on the charge of pedophilia
4 hours ago

Agreement between Nepal Tourism Board and India's TAAI
5 hours ago

Danish tourist dies at Makalu base camp
5 hours ago

IN PICS: Farmers in Bhaktapur busy picking ‘makhamali’ flowers for Tihar
35 minutes ago