Juventus clinch eighth Serie A title in a row 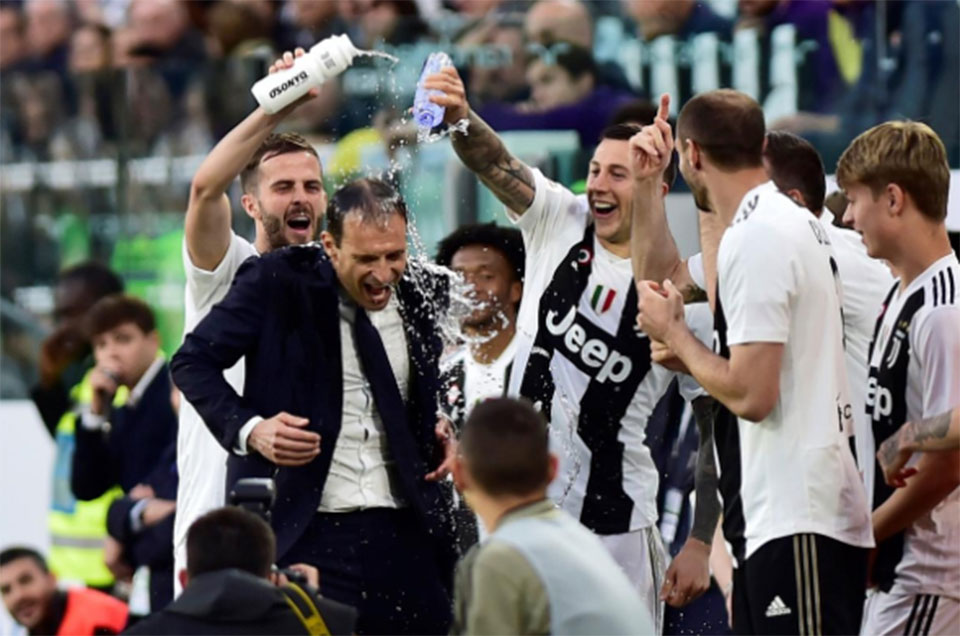 TURIN, Italy (Reuters) - Juventus overcame their European blues when they fought back to beat Fiorentina 2-1 at home on Saturday and claim the Serie A title for a remarkable eighth season in a row.

Knocked out of the Champions League by Ajax in the quarter-finals on Tuesday, Juventus fell behind to a Nikola Milenkovic goal in the sixth minute and survived two Federico Chiesa shots against the woodwork before halftime.

But an Alex Sandro header and a German Pezzella own goal either side of the break wrapped up a record-extending 35th scudetto crown and allowed Cristiano Ronaldo to add to the English and Spanish titles he won with Manchester United and Real Madrid at the first attempt.

Juve’s 28th win in 33 league games this season left them with 87 points, 20 more than second-placed Napoli who have six games to play. They are the first team to win any of Europe’s top five leagues — England, Spain, France, Italy and Germany — eight times in a row.

“To win the championship with five matches to spare is testimony to the great season we have had,” said coach Massimiliano Allegri who has been in charge for the last five campaigns and also won Serie A with AC Milan in 2011.

Ronaldo, scorer of 19 goals in the campaign, said: “I’m really happy to have won the Italian title in my first season here. It has been a great season for this Juventus, we also won the Italian Supercup. We didn’t do so well in the Champions League but there is always next year.”

However, it still had the air of the consolation prize after their failure to progress in the Champions League which they had high hopes of winning following the signing of Ronaldo in July.

AJAX LOSS
The Turin side appeared to be suffering the after-effects of Tuesday’s 2-1 home defeat by Ajax, when they were outclassed by the Dutch side, in the opening half hour.

Fiorentina were without a win in their previous eight Serie A games but Milenkovic put them ahead, firing into the roof of the net from close range after goalkeeper Wojciech Szczesny diverted Chiesa’s cross into his path.

Chiesa curled a shot against the post as Juventus continued to struggle before Sandro came to the rescue as he got away from the Fiorentina defence to score with a low near-post header from a corner in the 37th minute.

Juventus had another escape before halftime as Chiesa rattled the underside of the crossbar with a rasping drive.

But a moment of brilliance from Ronaldo ended Juve’s suffering as the Portuguese forward produced a devastating burst of speed to reach the byline and his low cross was turned into his own goal by Fiorentina defender Pezzella.

“We don’t think it’s really sunk in that we are re-writing history,” said defender Giorgio Chiellini, who has taken part in all eight campaigns but is currently sidelined with injury.

“I don’t know if anyone will ever repeat this is football, above all in Italy —- eight titles in a row.”

Juve’s total of 35 Serie A titles is nearly double the number won by nearest rivals AC Milan and Inter Milan who have 18 apiece.

Juventus claim to have lifted the trophy 37 times, refusing to recognise the decision to strip them of the 2004-05 and 2005-06 titles following the so-called Calciopoli match-fixing scandal. That also saw them relegated and they bounced back at the first attempt.