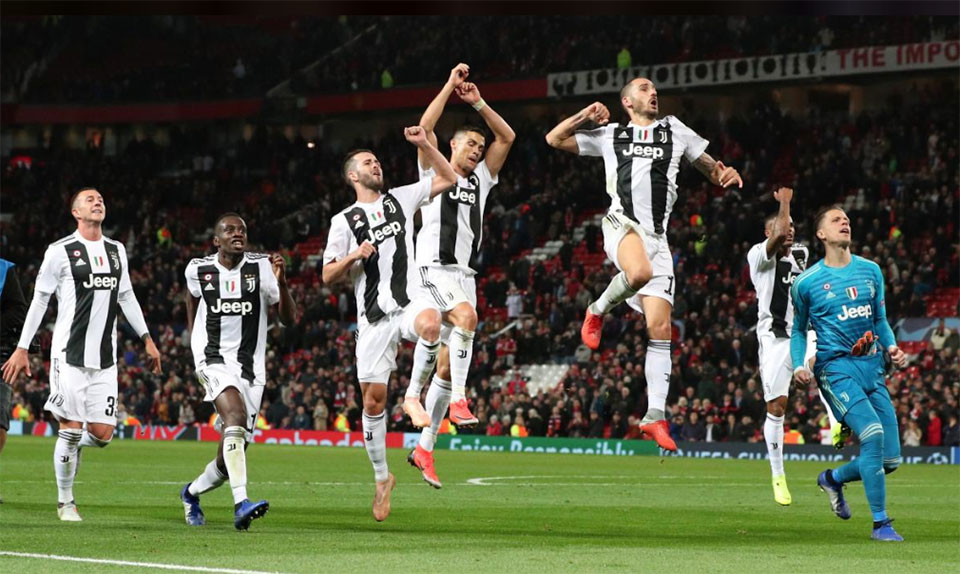 MANCHESTER, Oct 24: An impressive Juventus beat Manchester United 1-0 at Old Trafford on Tuesday to take command of Champions League Group H with a maximum nine points from three games and demonstrate just how far Jose Mourinho’s side are from Europe’s elite.

Paulo Dybala’s 17th minute goal, a simple conversion after a low cross from the right by former United favourite Cristiano Ronaldo, won the game but the dominant Italian champions could have won by a much more convincing margin.

United needed their Spanish keeper David de Gea to be in top form as he made a series of good saves, including an excellent effort to keep out a second-half strike from Ronaldo.

If United fans can see little hope of their side catching up the top trio in the Premier League they will also know after this game that there is precious chance of them doing better in continental action.

With four points leaving them second in their group, ahead of Valencia and Young Boys, United may still progress to the knockout stages but the gulf between them and a team equipped to reach the latter stages was all too evident.

United were unchanged from the team that drew at Chelsea in the Premier League on Saturday but the visitors very quickly demonstrated that they had no fear of the task in front of them.

Perhaps United’s players would have been better joining their manager Jose Mourinho on the ten-minute walk from the team’s hotel to the stadium than sitting in traffic for an hour on the team bus because they made a woefully slow start.

Right from the outset, Massimiliano Allegri’s side were sharper, faster, more precise and showed more purpose than Mourinho’s men, who struggled to even match the tempo of the Italian champions.

The most disconcerted Juve looked in the early exchanges was when a fan invaded the pitch only to be apprehended by security before he could reach his apparent target, Ronaldo.

It was no surprise at all when, in the 17th minute, Juve took the lead.

Ronaldo broke down the right and put in a low cross towards the near post which Chris Smalling and Juan Cuadrado challenged for before the ball fell kindly to Dybala, who converted with ease.

Juve sensed the fear in their opponents and looked for a quick second as Joao Cancelo burst unchallenged into the area and then tested United De Gea with a fierce drive.

It was a busy opening half for the Spanish keeper — Ronaldo struck a swerving free-kick straight at De Gea, who then did well to keep out the follow-up effort from Blaise Matuidi.

The halftime statistics showed a remarkable dominance for a visiting side at Old Trafford with Juve enjoying 67 percent of possession and double the amount of passes.

Ronaldo, operating in a free role, roaming wide when he felt it would be fruitful, brought another fine save from De Gea seven minutes after the interval with a thundering shot after being set up by Cuadrado.

United’s effort could not be faulted, however much guile and penetration they lacked, and they could have drawn level in the 75th minute when Paul Pogba, facing his former club, struck the post with a left foot shot from outside the box.

At the final whistle, another fan tried to greet Ronaldo and came up against security officers but the Portuguese insisted on taking a photograph with the interloper and left the field to the applause of both sets of fans.

Once again, United fans were left with a reminder of their glorious past in the shape of their old boy Ronaldo. It was their only consolation after a game in which their current weaknesses were so comprehensively exposed.