Justice delivery ineffective due to lack of legal awareness 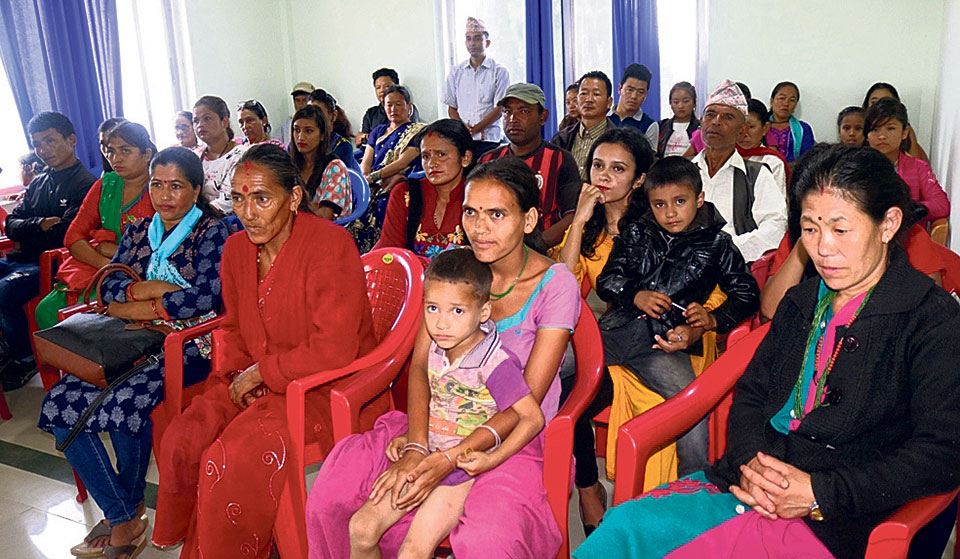 ILAM, Oct 2: Renuka Chauhan of Ilam Municipality-9 stayed in Kathmandu for some months for his son’s treatment after her son was diagnosed with brain tumor last year. In the meantime, her husband Chandra Prasad Chauhan brought home a young woman stating that she is a distant relative. Enraged, Renuka filed a case of polygamy against him at the district court. The district court however did not find her husband and released him. However, recently it has surfaced her husband has fathered a child with the woman and that they were indeed in a serious relationship.

“I filed case against him last year. It took time for the court to decide on the case. Later, the court did not rule in my favor. Though the court ruled out that my husband was in a polygamous relationship, I have come to know about their child,” lamented Renuka. “Now how can I get justice?” she questioned.

Renuka asked the same question in front of chief administration officer, chief police officer and chief deputy attorney general on Sunday. She was speaking at a public hearing program organized by the district police office.

“Relationship with my husband has worsened. If I go to Ilam, he comes back to Kathmandu and if I go to Kathmandu, he gets back to Ilam,” she narrated. “His behavior is affecting not just me, but my children as well,” Renuka added.

The couple has three children and Renuka is solely looking taking care of them. Her husband has stopped even providing financial support.

“These children are totally dependent on me. He has not taken any responsibility,” she said. “The court ruled out that he was not in a polygamous relationship but now we have become helpless,” she added.

A woman from Sandakpur village who was raped in 2016 is not happy with the justice system either. Speaking at the program, she said that access to information on cases that the victims have filed at the court is not available even to them also.

“After the incidence, I went to police to file complain. The case was taken to the court. I was told that the court has sentenced him to five years in prison. However, now I hear that he is was not sent to prison but was instead freed,” lamented the woman. “Either I was told a lie that he has been sentenced to jail or they have done some tricks to free him. How can I know what exactly happened to victimizer?” she asked.

The woman participants who had gathered at the hearing were anxious about the case they filed and the court’s verdict. Most of them had no knowledge about the developments. However, some lamented about false assurances by lawyers.

“Rape case was filed against my son. A lawyer took away Rs 70,000 promising that he can set him free. But I don’t see the lawyer around here anymore,” said an elderly woman. “My son is still in police custody and I don’t know what will happen to him,” she added.

The woman stated that the lack of legal knowledge has robbed them of money, time and energy. Not only lawyers have been taking advantage of this, but also the state’s mechanism has failed to deliver justice to victims, they complained.

“We do not know classifications of cases or where we should go for what types of cases. Whether we should go to the police, or to the court or to the district legal committee, we are not sure,” said a participant. “When the process is not known, justice is indeed affected. They should have made it simpler,” she added.

According to Laxmi Katuwal of Sangrumba village, people do have faith that court gives justice. However, they hesitate to file cases as they have little knowledge of the process. “Many people continue tolerating violence and other kinds of injustice because they do not have enough knowledge of the legal system. They just get lost in the process. If they try to seek assistance from an advocate, they are often cheated,” Katuwal said.

While rape and other types of violence against women are reportedly on the rise, the lack of legal assistance seems to have distanced victims from justice. The lack of legal awareness on the part of victims makes it easier for the guilty to destroy evidences and escape the scene, they claimed. According to the District Police Chief SP Madhav Prasad Shrestha, social justice is not possible without women being legally empowered.

“Timing matters a lot in crime cases. If we get notice on time, we can not only collect evidence but also prevent crimes. But there is lack of awareness among the general public, and that indeed makes the justice system weak,” said Shrestha.

Chief District Officer (CDO), Shrawan Kumar Timilsina stressed on the need to conduct out legal awareness campaigns. “If we are not aware about our rights, we cannot seek justice if our rights are violated. In our society, lack of legal knowledge is an obstruction to justice. We need to launch awareness campaigns,” he said.