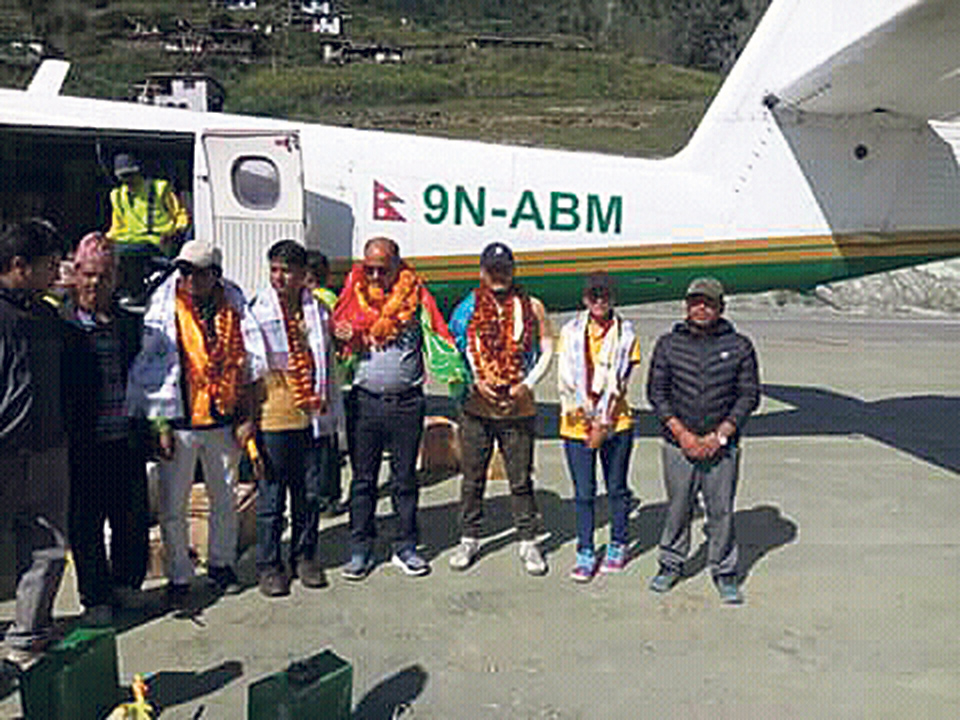 JUMLA, Sept 9: Blacktopping has been almost completed at the runway of Juphal Airport, in the western mountainous district of Jumla.

After the completion of 90 percent of blacktopping at the runway, Tara Air has become the first airlines to land flight here in Juphal airport. This has been considered as one of the most dangerous airports of the country.

Locals have expressed their happiness after the flight landed there. Captain Prabhakar Ghimire and Co-Pilot Basanta Lama have done the first proven flight at 9 am on Friday. Following the Tara Air flight, other regular flights have come into operation.

“We are done with almost 90 percent of the work, rest of the work will also be completed soon,” said Bir Prashad Shahi, engineer of Civil Aviation Authority of Nepal (CAAN). The airport has been started focusing the upcoming festival season, the Dolpa Airport office of CAAN told Republica.

In July 15, 2017, after 42 years of being under-construction, blacktopping was started at the 560-meter-long runway, turnings, and parking of the airport. The flight services were halted for two months while the airport was being blacktopped.

Locals of Dolpa district have faced a huge problem after the flight services were halted. They had to walk for almost one week for surface transportation. Meanwhile, the Mashinechaur airport was in process to start the flight service, though.

The blacktopping was supposed to be completed last month, but due to equipment issues and carelessness of the contractor the work was delayed, locals told Republica. Since the last four years, Kalika Siddhisahahi JV Construction has been working on the progressing construction of Juphal airport. CAAN has provided Rs 98.1 million to the company for the reconstruction of the airport.

Blacktopping on the runway, turnings, and parking has been completed however a 50-meter stretch of the runway and some of the parking area are still to be paved. CAAN permitted Juphal airport to operate keeping in view the upcoming Dashain festival, the biggest festival of the country, according to engineer Shahi.

Because of short and gravel runway, only small aircraft could land there earlier. Even a small rainfall used to make the runway full of mud. Locals of Dolpa had long waited for a reliable airport. Now, aircraft can land in the airport, easing the locals’ need for transportation, said Krishna Prashad Rijal, chief of Civil Aviation Office, Dolpa.

As the flight services were halted for almost three months, locals of Dolpa had to walk for seven days to catch a vehicle.

Locals elated to see plane at the airfield after a decade ... Read More...

POKHARA, Feb 28: The construction of Pokhara Regional International Airport, which is considered as a project of national pride, appears to... Read More...