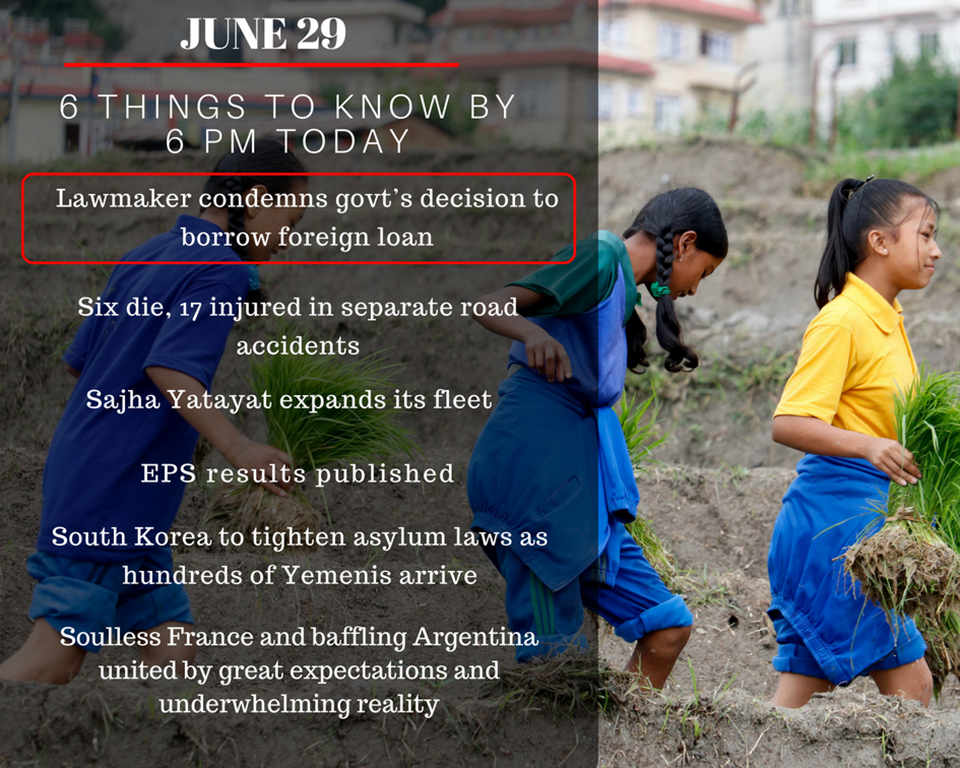 Nepal Peasants and Workers Party lawmaker Prem Suwal said that the country could not afford to take foreign loans further because it was already in debt trap. Divided to citizens, each Nepali owes Rs. 25,000. Instead, he urged the government to render efforts toward curbing ongoing misappropriation of the state coffer rather than borrowing foreign loans. A Bolero jeep, Ko 1 Ja 1806 was en route to Pingla from Salyan's Doli when it veered 1000 meters off the road killing six of its seven passengers in Solukhumbu. Likewise, in another incident at Balaju, 17 people including the bus driver sustained injuries after a local bus lost control and veered into the Sesmati River. The bus (Ba 3 Ka 3749) was heading to Ratnapark from Dharmasthali. Sajha Yatayat is adding 24 buses, four deluxe buses and 20 city motor vehicles to expand its services. Four buses are likely to arrive here by a week while the remaining others will enter the valley in the near future. Results of the ninth edition of the Test in Proficiency in Korean (TOPIK) language under the Employment Permit System (EPS) have been announced. Of the total 74,866 applicants 7,996 passed the test. South Korea will tighten laws governing the arrival of refugees after a rapid rise in the number of Yemeni asylum seekers sparked anti-refugee sentiment in the racially homogeneous country. The country has granted refugee status to just over 800 people since 1994. More than 540,000 South Koreans have signed an online petition asking the government to abolish or amend no-visa entries and the granting of refugee status to applicants. There probably won't be another match at the 2018 World Cup which pits two squads as talented as Argentina and France against each other. But, bar a few moments of Lionel Messi genius, there has been little to suggest from Argentina while Didier Deschamps' men ultimately had little difficulty getting through Group C.

Nepal extends international flights suspension until May 31
16 hours ago

Only 25% of banks' branches to be opened
2 hours ago

Bodies float down Ganges as nearly 4,000 more die of COVID in India
3 hours ago

35 killed in Gaza, 3 in Israel, as violence escalates
5 hours ago

Nepal extends international flights suspension until May 31
16 hours ago