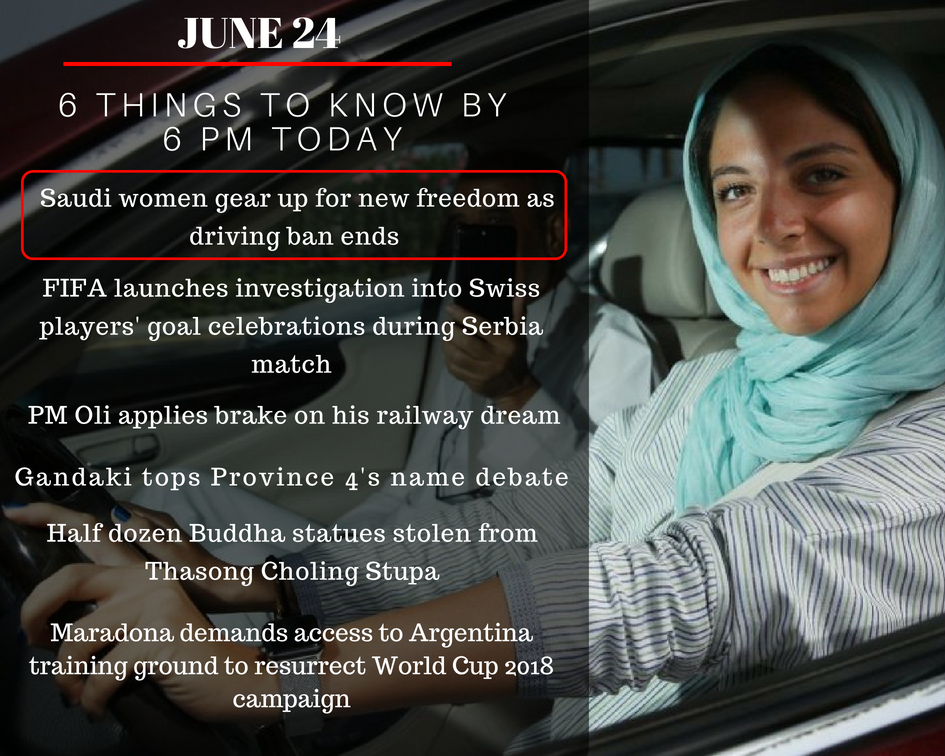 Women in Saudi Arabia took to the roads at midnight on Sunday, ushering in the end of the world’s last ban on female drivers. The lifting of the ban is part of sweeping reforms pushed by Crown Prince Mohammed bin Salman to open up its cloistered society. While welcomed by the West, it has been accompanied by a crackdown on dissent, including against some of the very activists who previously campaigned against the ban. They now sit in jail as their peers take to the road legally for the first time.

FIFA has opened disciplinary proceedings against Switzerland players Xherdan Shaqiri and Granit Xhaka, looking into their goal celebrations during their win over Serbia on Friday. Both players, who are ethnic Albanians and of Kosovar heritage, celebrated with a gesture which appeared to imitate the eagle displayed on Albania’s flag. Serbia refuses to recognise the independence of its former province Kosovo, whose 1.8 million people are mostly ethnic Albanians, which broke away 10 years ago. Prime Minister KP Sharma Oli said that it would take time for the much hyped railway to come to Nepal, despite claiming that a monorail would ply in Kathmandu’s roads within five years. Oli said that bringing a rail wasn’t as easy as waving a magic wand and it would, therefore, require careful planning and feasibility study.

The Province 4’s assembly is working to finalize their provincial name and its capital today after a committee formed to finalize names recommended it. Of those recommended, Gandaki tops priority. This is followed by Tamuwan-Magarat, Gorkha and Dhaulagiri. According to federal provisions, a province’s name must receive two third majorities in the assembly. With the Left Alliance in power, Gandaki, is likely to be approved with majority.

Half dozens of Buddha statues have been stolen from Thasong Choling Stupa in She-phoksundo rural municipality of Rigmo village, Dolpa. The statues, which were intact until Wednesday are believed to be stolen by Yarsagumba collectors on their way back home. Diego Maradona has demanded access to Argentina's training ground in a bid to heal the rifts that have torn apart Jorge Sampaoli's squad in a bid to lift their morale ahead of their decisive third group game against Nigeria. Argentina are on the brink of going out of the tournament after a draw with Iceland was followed by a 3-0 defeat at the hands of Croatia.And beleaguered boss Sampaoli has been at war with a number of his top players, including Manchester City striker Sergio Aguero.

Kathmandu Valley alone witnessed 57.86 percent of total COVID-19 cases recorded across Nepal in the past 24 hours
20 hours ago

Photos: Pinnacle installed at top of Bal Gopaleshwar Temple at Ranipokhari
18 minutes ago
Four killed, 10 hospitalized in forest fires in eastern Ukraine
1 hour ago
Former finance minister Khatiwada appointed as Nepal’s envoy to the US
2 hours ago

Kathmandu Valley alone witnessed 57.86 percent of total COVID-19 cases recorded across Nepal in the past 24 hours
20 hours ago