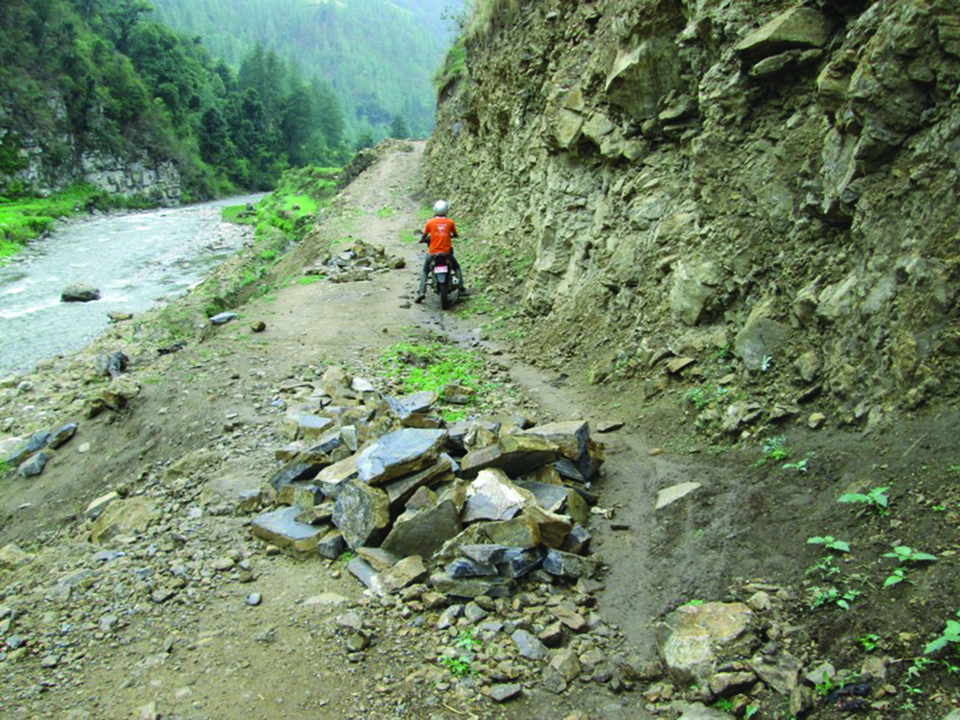 Republica A motorcyclist drives through a road track in Jumla in this file photo.

JUMLA, June 26: Roads reached Jumla decades later than many other parts of the country. Its road networks further widened in the last few years. Though nowadays the district operates long and short travel routes, travellers don't feel safe on their journies owing to its narrow and rough road tracks. Adding to this concern is the overloading of vehicles with passengers and goods. These issues have become a huge safety concern for the district's residents.

"It is good that we have transportation facilities these days. But now we are concerned about our life. It feels like we are risking our lives every time we travel," said an elderly man from Khalanga, Krishna Bahadur Budha. "When a family member leaves for somewhere in a bus or a micro-bus, we remain anxious until the member reaches their destination."

Police do not take vehicle overloading or overcharging passengers seriously. Everyone is in a hurry and willing to pay an additional fare to reach their destination. Even if ignorant and helpless people are bowing to the monopoly of vehicle owners, the government should protect its citizens. - Krishna Bahadur Budha, a Jumla resident

Budha accused owners of small public vehicles like microbuses and jeeps of running amock. Compared to the long-distance public vehicles, short distance operators overload their vehicles by squeezing in passengers far above their load capacity, he said.

"Short route vehicles operating along the Karnali highway are very careless. They drive as they please, squeeze as many passengers as they get," said Budha. "From Khalanga to Nagma bazaar of Kalikot, it's always a deadly journey."

Nagma bazaar is a frequent destination for Jumla residents. From purchasing commodities to finding jobs, they throng to this bazaar.

"Nagma bazaar is the most happening place around here. We travel there often for several reasons," elaborates Budha. "But we are fed up with the monopoly of the short route vehicle operators and the way they drive. They are reckless and insensitive to our concerns."

Apart from careless driving and overloading, locals are irked with them for charging them as per their will.

"Though fares have fixed by transport committees, we have to pay as much fare as they ask for," he lamented. "They behave like opportunists, the more you require using the public transport service, the more they charge you. It seems there is no one to enforce rules that secure public interests."

According to locals, long distance vehicles do not get that many passengers and as such are more lenient towards passengers. Few people travel in long-distance vehicles on an everyday basis. However, short distance public vehicles are always in demand and therefore, their owners exploit the passengers.

"Even though they are supposed to carry 10 passengers, they start only if they have 15 passengers in the jeep. There never turn down a passenger, they carry as many passengers they get on the way," Budha said.

Majority of the roads in Jumla are inclined and sloppy. On top of that, there are no road sidebars also. Plying through these roads with an overloaded vehicle is extremely risky.

The distance between Khalanga to Nagma is 32 kilometres and to travel this distance; passengers are supposed to Rs 250 for a one-way journey. Budha said that depending on the situation, vehicle owners always charge more than that and if denied they ask the passenger to get down from the vehicle.

"Though the official transportation rate for the distance is Rs 250, they ask for more on various pretexts. Before boarding the vehicle, they negotiate the fare, and if you are not willing to pay the fare they ask, they don't let you ride," reported Budha.

There are four police beats in this roadblock. But they never inspect public vehicles, Budha said. "Police do not take vehicle overloading or overcharging passengers seriously. Everyone is in a hurry and willing to pay an additional fare to reach their destination. Even if ignorant and helpless people are bowing to the monopoly of vehicle owners, the government should protect its citizens," he said.

Meanwhile, District Traffic Police Office of Jumla said that the police have been doing its job. Due to the lack of human resources, it is not possible to inspect every vehicle, but the police force has been doing its duty at designated check posts, it claimed.

LONDON, May 1:  Everest climbers could face a starkly different landscape stripped of the dramatic Khumbu Icefall within decades as... Read More...

Girls' education still not a priority for Jumla families

Leafy green vegetables are a staple for local families during this season. With the food stock very low, families mostly... Read More...