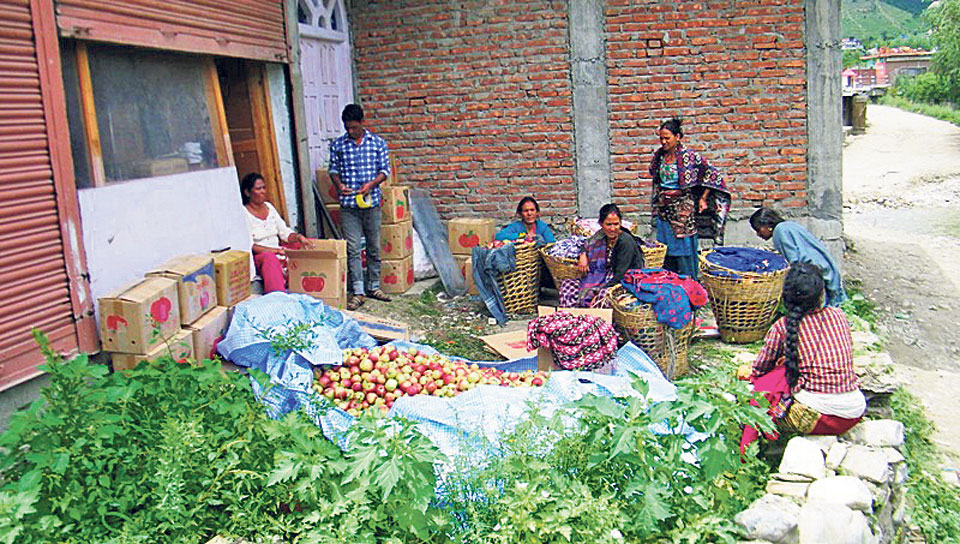 JUMLA, August 20: Jumla apples are facing the problem of branding as the farmers in the district have been sending them in foreign-made carton boxes because they haven’t yet received carton boxes with ‘Organic Jumli Apples’ imprints that the District Agriculture Development Office (DADO) was supposed to provide them with a subsidy.

Traders say that it is hard to brand the apples as a local organic product because of packaging. They complain that due to the foreign-made carton boxes, consumers do not believe it is local organic apple from Jumla.

Apple traders say that there have been instances when consumers simply returned the apples saying that the apples packaged in foreign-made cartons could not be organic apples from Jumla.

“People don’t believe that the apples are from Jumla,” said Krishna Buda, an apple trader in the district.

Farmers are supplying apples in Indian and Chinese cartons that are used to import banana, tomatoes, pomegranate, orange, cauliflower, and chili.

The DADO has already purchased 16,000 cartons that consist of organic Apple's logo and the name of DADO, with 75 percent subsidy. However, apple farmers have not received these cartons.

The DADO has been distributing the cartons to agricultural cooperatives, farmers’ groups and district cooperative association. The farmers who do not have access to these cooperatives and groups are buying foreign-made cartons to supply their apples.
Balabir Thapa, a local farmer, said that the government-provided boxes have not reached poor farmers.

Farmers claim that they have been exporting apples even in sacks of sugar and rice. The face questions about the quality because of packaging.
In the words of Surja Laxmi Rawal, a local farmer, the packaging has degraded the brand of Jumla apples.

APPLES IN TREE SELL FOR Rs 50 PER KG
Farmers in Jumla have been selling apples for Rs 50 per kilogram right from the tree. Earlier, they had to transport the apples to the market to sell for Rs 20 to 25.

Traders have been coming to the doorsteps of the farmers to buy apples. The production has been down because of the withering of buds in drought, which has increased the demand in the market.

Previously, around this time, farmers had to transport their apples for sale in district headquarters Khalanga and the airport.

JUMLA, Nov 4: Apples grown in Jumla have fetched Rs 100 per kg in the district headquarters itself. ... Read More...