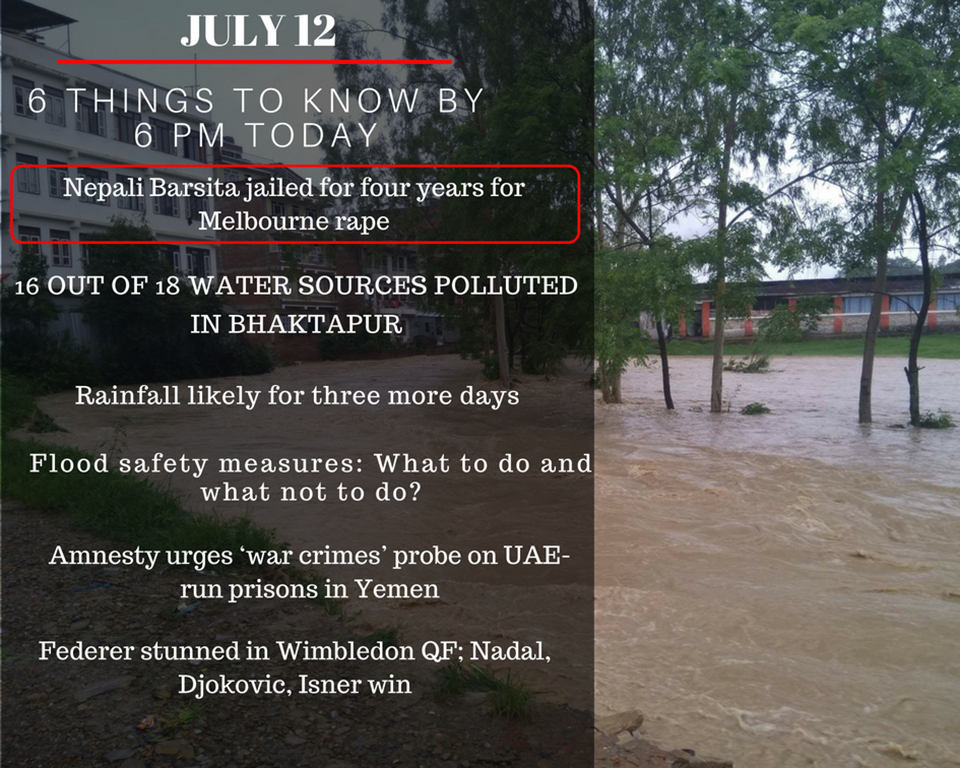 Indra Bhandari, 30 has been jailed for at least four years after County Court of Victoria found him guilty for raping and sexually assaulting the 23-year-old on a couch at her home in March 2017. Bhandari was sentenced to six-and-a-half years in jail and must serve at least four years before being eligible for parole. Thereafter, as a non-Australian citizen, he may be subject to deportation.

16 OUT OF 18 WATER SOURCES POLLUTED IN BHAKTAPUR Sixteen of the 18 water sources of Bhaktapur contain chloroform bacteria, according to water test carried out by the District Public Health Office. The office had carried out laboratory test of water samples from 18 sources at Changunarayan, Nangkhel and Suryabinayak. Only the water at Teendhara source at Katunje of Suryabinayak Municipality-6 and Swasthyachauki, Nagarkot at Changunarayan Municipality-6 was found potable. The Weather Forecasting Division of the Department of Hydrology and Meteorology has said that most of the parts in the country would witness rainfall till the next three days. According to the forecast, medium-sized rainfall is likely in eastern, central and western belts this evening while the rainfall would occur across the nation on Thursday night adding that some parts of the central, western and eastern regions would witness heavy rainfall.

Flood safety measures: What to do and what not to do? With more rains in the offing, here’s what to do and what not to do during flood:

walk through flowing water, drive through a flooded area, stay near from power lines and electrical wires

turn off utilities at the main power switch, move valuables, important papers and clothing to upper floors, sanitize bathtub in case the water supply becomes contaminated, if threatened, leave your home or move to upper floor, if you're in your car when the water begins to rise quickly, abandon it and move to higher ground

Amnesty International called for an investigation into alleged disappearances, torture and possible deaths in detention facilities run by the United Arab Emirates and its allied militias in southern Yemen as potential war crimes. In Yemen’s 3-year-old civil war, the UAE is part of a Saudi-led coalition battling Iranian-backed Shiite rebels known as Houthis who have taken over most of the country’s north. Ostensibly, the Emiratis and Hadi’s government are allies in the fight, but tensions between them have been high. Roger Federer was a point away from a rather tidy, straight-set victory in the Wimbledon quarterfinals. One lousy point. Federer lost to Kevin Anderson in a 4-hour, 14-minute tussle.