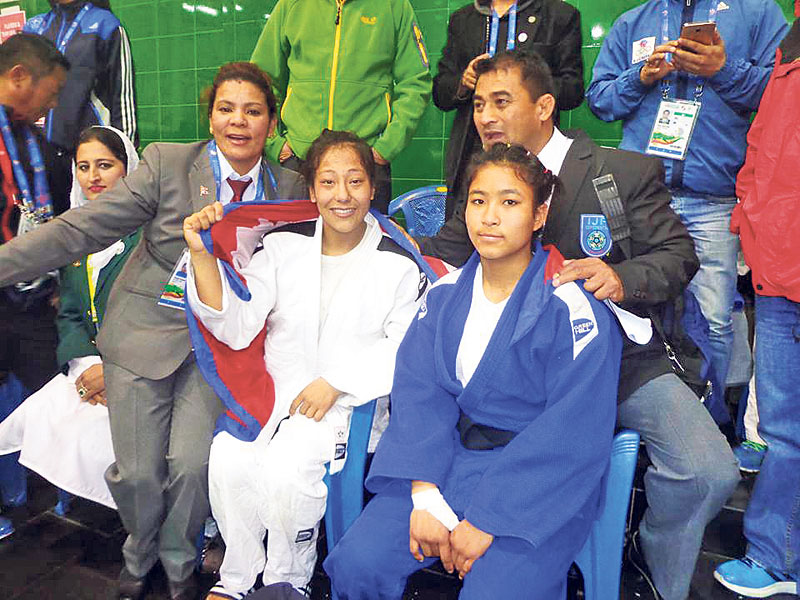 KATHMANDU, Oct 17: Orphans and helpless kids, who are often neglected by society and looked upon as burden, too have admirers. Such children are considered as potential recruits by Nepal Judo Association, which believes that they too can gain respect in society through sports and contribute to the nation.

The initiative taken by judo officials of Nepal to provide proper support and training to the vulnerable children has proved to be fruitful in transforming those kids into valuable "assets" of the nation.

"A few years ago, we had invested in programs to support orphans and vulnerable kids. The effort has become successful," said NJA President Deepak Harsha Bajracharya during a meeting on Saturday attended by the International Judo Federation (IJF) delegates, who were in Kathmandu to assess the impact of the earthquakes and the overall development of the game in Nepal.

"These kids are our assets. They have made the country proud at the international level," Bajracharya told Republica.

Manita Shrestha Pradhan, whose father is in jail and mother eloped, was among such kids who won medals in the recently held South Asian Games as well as Asian level championship, heralding bright prospects for the game in Nepal.

Besides respect and fame gained from the game, the children living in shelter have also received scholarship due to their sporting success.

"We are providing scholarships to Manita, Indra Shrestha and 12 other vulnerable children for their success in sports because their involvement in the game has made them disciplined and they stand as role models for other children of the school," said Maiya Devi Malla, principal of Bal Bikas Secondary School, Ranibari, where Manita is currently enrolled.

According to Malla, the involvement of children in sports has had a great impact in developing proper manners and discipline.

"Children from shelters were unruly and difficult to handle until they got involved in judo," said Malla, who added that there are children studying in the school from five different shelters but only the ones undergoing judo training stand out among the crowd for their disciplined manners.

However, journey to success was not easy for 16-year-old Manita as she had to struggle since an early age after her mother eloped. Manita's father was in jail when her mother packed her bags and left the four-year-old girl and her younger brother at the mercy of her uncaring in-laws and never returned, says Surya Narayan Shrestha, chairman of Prisoners' Assistance Mission (PAM).

She finally landed in jail with her father and was rescued by PAM, where she gets proper food, education and judo training along with 29 other children whose parents are in jail.

"Despite all odds, she has made the whole nation proud. We can count on her for more success," said Shrestha, adding that proper support to such children can help them become able citizens.

According to Shrestha, children like Manita have gone through lots of hardship in life and they can easily cope with the hard training of judo to become top players.

Executive Director of CWCN Ranjana Sharma says that the organization has already rehabilitated 200 street children in society after making them capable citizens.

"We provide them education, counseling and judo training," said Shrestha.

IJF Media Director Nicolas Messner, who is also the chief of Judo for Peace Commission, said during Saturday's meeting that they were here in Nepal to see how judo values can help people improve their lives.

According to Messner, the ultimate goal of any game is to help in rebuilding society.

"Judo can be used as a social development tool," said Messner.

Number of people joining the Maoist Center has increased: Dahal
9 hours ago
Eighth Tanahun festival to begin from January 22
10 hours ago