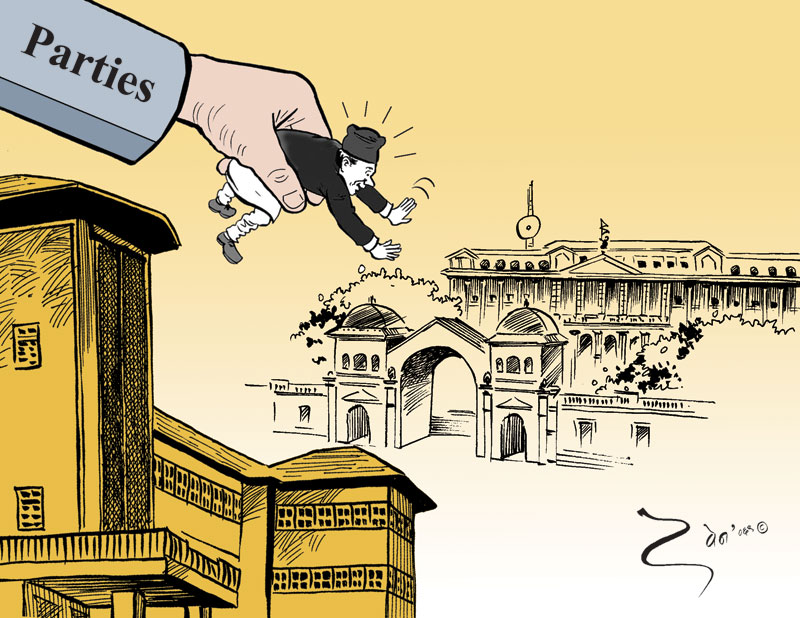 Political affiliation is still a major criterion for judge appointments and it badly affects justice delivery
The country’s judge appointment process has drawn much scrutiny of late. Recently, another writ petition was filed at Supreme Court against the Judicial Council in relation to the appointment of high court judges. This challenge to the council’s decision is significant because it is the government attorneys, as a community, who have lodged the petition.

Even before council’s decision had been properly evaluated, government attorneys had boycotted all court and tribunal proceedings until the council reviewed its decision. They argued that the appointment limited their representation. The Nepal Bar Association (NBA) had also issued a statement arguing that the high court judge nominations ‘were in contravention of the constitution and the Judicial Council Act’.

In fact, the news of undue lobbying and politicization of the list of nominations made headlines even before the appointment process started. Reportedly, members of Judicial Council had also been wrangling over individual authority in nominating the persons each of them wanted. So much so, disagreement over nominations had not been settled even until the final meeting, which two council members had boycotted.

As has been argued in the legal fraternity, the council’s decision to finalize the nominations was procedurally flawed owing to the absence of some council members in the said meeting. There were even allegations that appointment had been finalized overnight to circumvent possible objection by some who were soon to be inducted into the council.

Regardless, our judicial appointment appears to be marred by political interference. Last year, several advocates, affiliated with ruling as well as opposition parties, had been appointed as Supreme Court judges.

Though there are no provisions for political reservations either in constitutional or statutory laws, politicization of appointment process is there for all to see. Justices of Supreme Court and the newly formed seven high courts were chosen on the recommendation of the Judicial Council. This, in effect, means there are party-based and minority quotas for judicial appointments in all tiers of the judiciary.

The very structure of our Judicial Council seems politically motivated ever since its 2007 overhaul. It is now dominated by members who are appointed on the basis of their political affiliations rather than on merit. The manner in which council members have been appointed in the past few occasions was rather opaque, raising question mark on the accountability of such members.  In the same vein, the NBA has also been increasingly politicized and has, as a result, been unable to take a professional stand on matters relating to the judiciary.

That political affiliation (or lack thereof) has become a major criterion in appointment process of judges in Nepal which will have grave repercussions in our justice delivery system.

For one, when judges are appointed along political lines, they are always indebted to ruling elites so long as they are in office, thus undermining their neutrality which is vital for fair justice delivery. When these judges preside over cases concerning political actors or the persons affiliated to political parties, they are more likely to give them clean chits. More important, such political appointments call into question the competence of judges so appointed, as they lack qualifications and professional expertise for the position. This in turn will erode public faith in the judiciary and further impede the justice system. Independence of judiciary, one of democracy’s fundamental tenets, will be jeopardized if the judiciary is so liable to influence of the executive.

Complaints and protests over political appointments will further politicize the issue. Along with the judiciary, many of our major organs and institutions are now plagued by undue political meddling.

There are instances of the meetings of Constitutional Council, which is responsible for finalizing appointments in constitutional bodies, being delayed for weeks on end because of differences between ruling and opposition parties. As a result the functioning of many constitutional bodies is affected. The delay in appointment of ambassadors to various countries and the embarrassment it has caused Nepal abroad proves this.

We need legal reform—both constitutional and statutory—to ensure the Judicial Council and all other constitutional bodies are free from political interference. With regard to the appointment of judges, the appointment procedure must be clearly laid down and nominations be governed by clearly set standards. The Nepal Bar Association must also, eliminating all political bias, function as a truly professional organization working to uphold the values of law and justice.

The author is a law student and a freelance writer