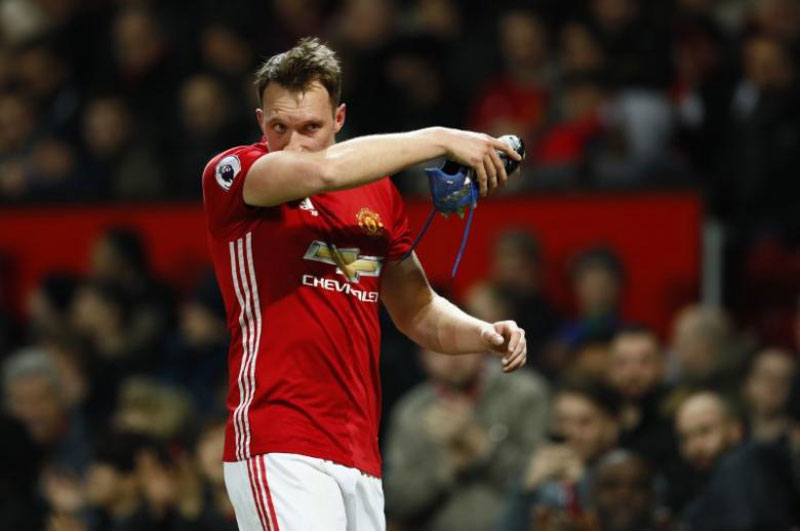 Manchester United defender Phil Jones is out of England's squad for their upcoming international fixtures against Germany and Lithuania after sustaining an injury in training, England coach Gareth Southgate said on Tuesday.

Southgate, who also confirmed Gary Cahill would captain England in Wednesday's prestige friendly international against Germany, added that Manchester City winger Raheem Sterling was doubtful for the match after a busy week of club football.

Jones, who has 20 caps for England, has been sent back to his club for treatment on a possible toe injury and will miss the Germany match in Dortmund and the World Cup qualifier against Lithuania at Wembley four days later.

Jones was injured in training earlier on Tuesday and will need further checks to determine the extent of his injury.

"We don't know (the extent)," Southgate said. "We did not feel it was an injury we could treat and have him ready for the game.

"We will know once he has had scan or an X-ray. It was an innocuous tackle. He caught the bottom of somebody's foot. Possible injury to his toe."

Southgate added that a decision on Sterling would be taken just before the Germany game.

As expected, Cahill was confirmed as captain with Manchester United forward Wayne Rooney having been omitted from the squad.

England hope it is a happy omen that the Chelsea man is in charge again after he led them to a 3-2 victory in Berlin when the two teams met a year ago but another captain will have to be chosen for the Lithuania match as Cahill is suspended.

"Gary's in very good form, he's one of the players in the squad who knows what's needed to win. He has won every trophy in football," said Southgate.

"This season, in particular, he is growing in confidence and stature, showing real confidence on the ball.

"His experience sometimes is overlooked in terms of what he brings because he goes quietly about his job."

LONDON, Oct 05: Winger Raheem Sterling has the determination to replicate his domestic form for the England national side, manager... Read More...