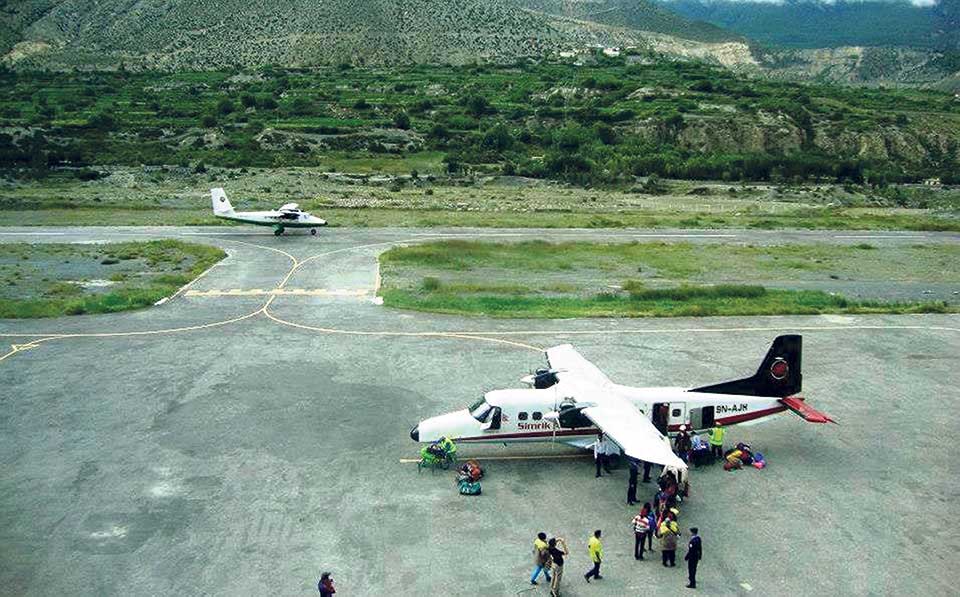 Passengers collect their luggage from a Simrik Airlines aircraft at the Jomsom Airport in this file photo. | Republica

POKHARA, Dec 4: After nearly two decades runway of the Jomsom Airport is being repaired. The runway was in dire need of repairs for a long time now. According to Pushparaj Neupane, an engineer with the Civil Aviation Authority of Nepal (CAAN), the repair project worth Rs 800 million has already kicked off. “The work of erecting fences around the airport is almost over. Blacktopping of the runway and construction of parking area will follow soon,” he said.

Neupane said that the height and thickness of the blacktopping of the highway will be reworked during the repairs. Such reworking is necessary for making the runway safer, he added.

“The repairs will focus on the making the surface of the runway even. Since it has not been repaired for a long time, its surface has become disproportionate,” he said.

“Along with that, we are constructing embankments on the bank of Kaligandaki River. Due to gradual erosion the river is becoming a threat to the airport,” he added.

The authority has set the deadline of two months for fencing and embankment purpose and the task of blacktopping is expected to begin in February.

“Blacktopping of the runway is scheduled for February and we are working hard to meet the deadline,” said Neupane. “Along with making the surface of the runway even, the runway will be five centimeters thick.”

In Jomsom, the mercury has dipped already. Due to increasing cold, ongoing work at the airport has been affected. “The increasing cold has affected our speed. We could have worked faster if the weather would have been favorable,” Neupane stated.

Jomsom receives heavy snow in winters. For a few weeks, normal life comes to a halt. “It is an annual story here. So, we are preparing for it. If we do the blacktopping now, our work might get stuck halfway due to the snowfall,” said Neupane. “So, we are waiting until February.”

Snowfall obstructs transportation in Jomsom for days. Most of the time, locals take help of Nepal Army and police personals to clear the roads.

According to Neupane, all those aspects are being taken care of while calculating the time to start blacktopping of the runway which is over 800 meters long and 20 meters wide.

The runway at the present is inclined towards the east. This makes it hard for the pilots while landing or taking off flights. According to Neupane, there was a need to drive it very fast on the runway due to the slope. “After this is repaired it will be much easier for the pilots to land and take off.”

He stated that such aspects of the runway were neglected during the initial construction. “Thickness, width, and the length of the runway should be calculated and aligned well. But when it was made, these things were not considered thoroughly,” he said.

Neupane claimed that the because of the availability of the equipments, the blacktopping of the runway will take just two weeks. ‘If there were no advanced equipment, it would take over a month for us to blacktop the runway. Even then, the finishing would not be as good as it is when advanced equipment is used,’ he said.

The machine used for mixing aggregate and bitumen is considered a key factor for building durable roads.  In lack of modern machines that can prepare a good quality mixture, blacktopped roads become weak.  “We are trying to have the best equipments for repairing the runway. If we get them, it will be even greater. Even if we don’t get them, machines that we have presently signed up for the task are also very good,” he said.

Except on days when weather conditions are adverse, there are regular flights from Pokhara to Jomson. Tara and Summit Airlines operate daily flights to and fro.

During peak tourist season, these flights are overbooked and sometimes is very hard to get the tickets. Jomsom is a gateway for popular tourist destinations such as the Annapurna circuit, Upper Mustang, Lomangthang, and Muktinath, among others.

Lack of construction details of over 1200 bridges affects repair

KATHMANDU, Jan 11: Lack of construction details of more than 1,200 bridges across the country constructed by various foreign countries... Read More...

Blacktopping done in hurry results in cracks within four months

GORKHA, Nov 1: The blacktopping of Abukhaireni-Gorkha road was intensified just a few weeks before the end of the last fiscal... Read More...

Karnali bridge starts to wear down due to lack of repair

TIKAPUR, August 29: The bridge connecting the far-western region to the rest of the country has started to wear down... Read More...

Snowfall takes its toll in Gorkha
10 hours ago