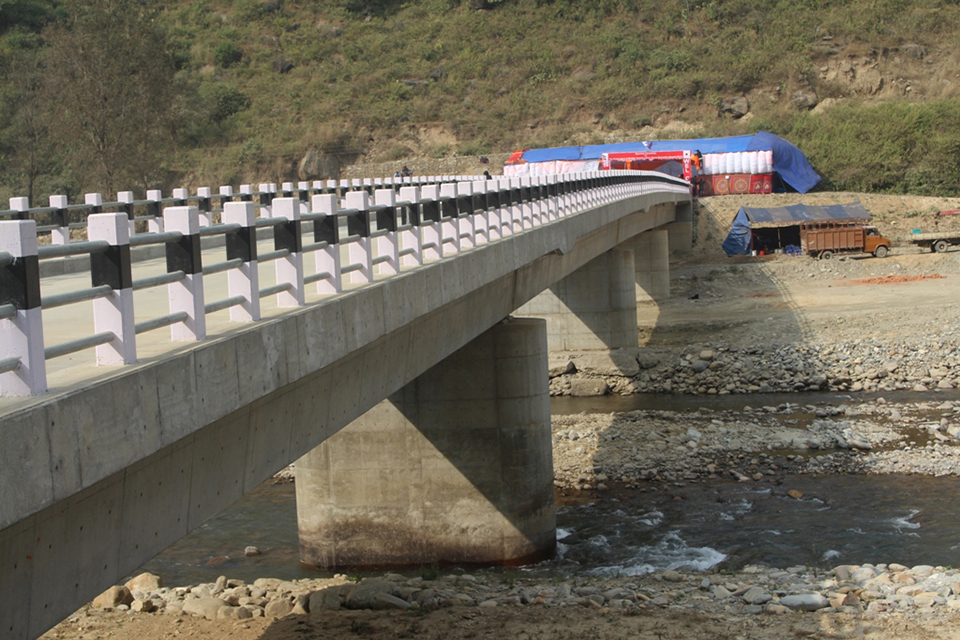 A concrete bridge constructed by JICA in Gorkha district in this picture taken on Tuesday. Photo: Narahari Sapkota/Republica

Those bridges were constructed with the financial assistance from the Japanese government. As per the agreement, these projects should have been completed within 18 months but JICA completed them in just 16 months. However, the blacktopping of 11 km road in Barpak is yet to be completed even though the deadline expired two years ago.

Swachanda Nirman Sewa was given the contract to construct the bridge over Khahare and Jhyalla rivers of Ajirkot Rural Municipality. Similarly, Hazama Ando Corporation built the bridge over Daraudi and Ghattekhola in Ajmirkot, as well as Rangrang River of Sulikot Rural Municipality. According to JICA, three bridges were constructed with loan assistance while the two constructed by Swachanda Nirman Sewa were built with grant amount. A total budget of Rs 930 million was spent for the construction of the five bridges.

The bridge over Daraudi River is the longest measuring 134 meters in length. The completion of these bridges has delighted the locals.

"Before the construction of the bridges, we had no alternative other than carrying ill family members to hospital on our backs as vehicular movement used to be obstructed during monsoon," said Ved Prasad Dhital, adding, "We had to cross the rivers by risking our lives but not anymore."

Similarly, the bridge over Khahare and Jhyalla rivers are 25 meters and 50 meters respectively. Likewise, the Rangrung River bridge, which connects Barpak, the epicenter of the catastrophic earthquake of 2015, with the district headquarters is 50 meters long. JICA claims that these bridges are quake-resistant.

However, travelling will still be difficult because a portion of the road leading to Barpak needs blacktopping. Only three kilometer of the total 36 km road has been blacktopped so far.

"As of now, we are busy setting up walls and constructing sewers," said Baliraj Malla, chief of the project, adding, "We have urged the construction companies to speed up the work."

Raghubir Mahaseth, Minister for Physical Infrastructure and Transportation, inaugurated the newly constructed bridges amidst a program on Monday.

"JICA has contributed a lot for reconstruction process in Nepal," said Minister Mahaseth. He expressed his gratefulness toward JICA for handing over the project before deadline.