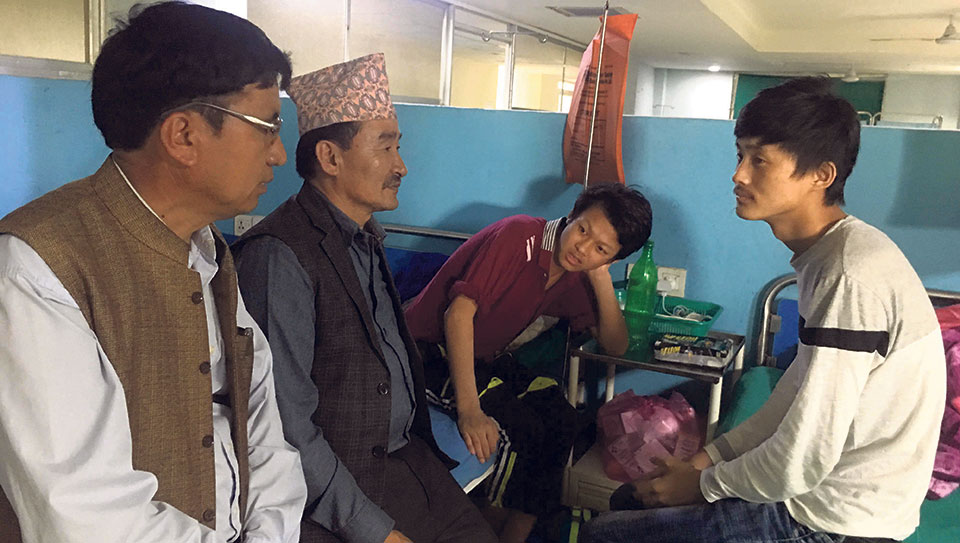 Sandesh Limbu (right), who has not been able to leave the hospital after being unable to clear the medical bills, speaking to province assembly member Bal Bahadur Samsohang (second left), and rural municipality chief Keshar Kumar Subba (left) at B & C Medical College Hospital in Jhapa on Tuesday. Khagendra Adhikari/Republica

TAPLEJUNG, May 1: A seventeen-year-old boy in Taplejung has been detained by a hospital after he was unable to pay the expenses of his treatment.

Sandesh Limbu of Thechambu in Pathibhara Yangwarak Rural Municipality-2 was admitted to Jhapa-based B&C Teaching Hospital and Research Center, Birtamod on December 12, 2018 after he sustained a bullet injury to his stomach.

It has been 15 days since he has been detained by the hospital as he could not clear the medical bills.

“I was medically discharged 15 days ago after recovery but they have held me back since I could not pay for my treatment,” said Sandesh, who is currently in bed no 22 of the surgical ward at B&C Hospital.

At a time when he is unable to clear his treatment bills, the hospital has been charging an additional Rs 700 as room charge.

“My relatives have been arranging food for me. But I can’t go outside,” said Sandesh. It took doctors four months to treat him.

“At that time we thought saving his life was more important and that’s why we admitted him. But now, he is not willing to pay the bills,” said Poudel. He further said that hospital is interrogating with the rural municipality chair Keshar Kumar Subba regarding the payment of Sandesh’s treatment expenses.

Sandhesh had accidentally sustained a bullet injury from his friend Sumit Limbu when they were out for hunting. Sumit and his uncle rushed him to the hospital after the incident. Later, Sumit went at large and is still contactless. Reportedly, a total amount of Rs 1.4 million was spent on his treatment. Out of the total cost, his relatives managed to collect Rs 200,000 while Sumit’s uncle Surendra paid Rs 351,500.

Chairperson Subba informed Republica that he has been making efforts to arrange money for the patient as his family cannot manage the expenses on their own.

BHADRAPUR, Aug 23: Three 'cloth banks' have been set up in Jhapa district with an objective of providing clothes free... Read More...