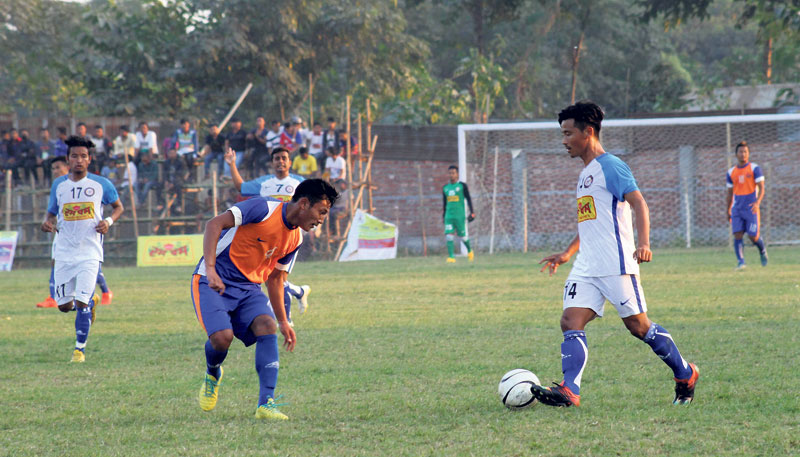 Yogesh Gurung and Bishal Rai netted in either half in Jhapa’s win during the last quarterfinal played at the Duhabi Stadium. Jhapa will take on Manang Marshyangdi Club in the semifinal on Thursday.

Yogesh slammed in from the close ranged in the eighth minute capitalizing on a ball parried by Sher goalie. Jhapa was made to wait until the last moment to widen the gap and ensure the victory. Bishal’s scorcher from the edge of the box ensured the win.

Kalimpong entered to the pitch directly without warming up as it arrived half an hour late than the scheduled kick off time. The delay not only resulted in reducing the 80 minute match time by 20 minutes, the first half also saw Kalimpong struggled for coordination in the unfamiliar pitch. Jhapa had the advantage of this condition in the whole first half and took the match under control. Jhapa, though, created frequent scoring chances, it failed to convert them.

In the early moments, Ganesh Khadka’s shot rebounded off the woodwork and his second attack was denied by Kalimponig goalie. In the 19th minute, the goalie denied a feeble shot of Bishal Rai set by Yogesh Gurung. The goalie again denied Pujan Uparkoti four minutes later. Karna Rai also squandered a couple of scoring chance after the break including a one-on-one with goalie.

“We achieved the win because the players performed to their level.” praised Jhapa coach Saujanya Rai.

Kalimpong coach Bijay Limbu pointed out absence of his four key players as the reason for defeat. “The absence of four crucial players and lack of proper team formation cost dearer for us.

Departmental team Tribhuvan Army Club will take on BRC of Bhutan in the first semifinal on Wednesday.

The tournament is being jointly organized by Eleven Arrows Club of Duhabai and Manomohan Foundation.