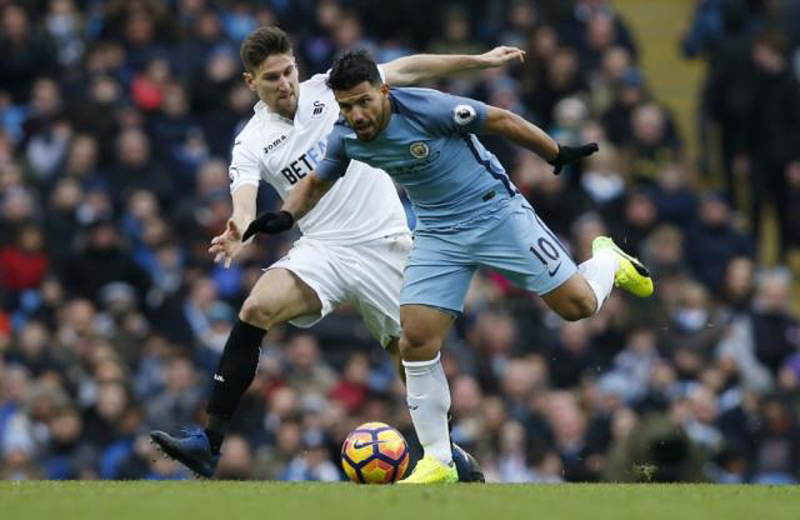 Gabriel Jesus scored twice, including a 92nd-minute winner, as Manchester City climbed to third in the Premier League with a 2-1 victory against a dogged Swansea City on Sunday.

Jesus, preferred again to top scorer Sergio Aguero, poked home to break Swansea hearts in the dying seconds in what was another eye-catching performance from the supremely-talented Brazilian.

It looked like City would be left to rue a host of missed chances when Gylfi Sigurdsson equalised in the 81st minute after Jesus had earlier opened the scoring in the 11th.

City climbed to third, one point adrift of second-placed Tottenham Hotspur while Swansea remained 17th, one point above Hull City in the relegation zone.

"I got into the team so quickly. Everyone at the club is helping me to get better every day but of course when things like this happen it is much easier.

We played very well all game and of course we deserved to win because we tried to score goals since the first minute."

Swansea had been rejuvenated under new manager Paul Clement, having won three of their previous four league games to climb out of the bottom three, but it was always going to be difficult against their free-flowing hosts.

City had already created a flurry of chances in a dominant opening before Jesus reacted quickest to poke home a teasing David Silva cross.

For all their dominance -- which yielded 74 percent possession at the break -- City were wasteful and failed to capitalise on a plethora of chances with Swansea, remarkably, making it to halftime without conceding a second.

The hosts made a lively start to the second period with City goalkeeper Willy Caballero palming Sigurdsson's free kick onto the post.

In an even second half Sigurdsson appeared to have snatched the most unlikely of draws when his low strike evaded Caballero's despairing dive before Jesus' late intervention.

City had been lethargic for much of the second period but Jesus finished at the second opportunity after his initial header was saved by Lukasz Fabianski to grab all three points.