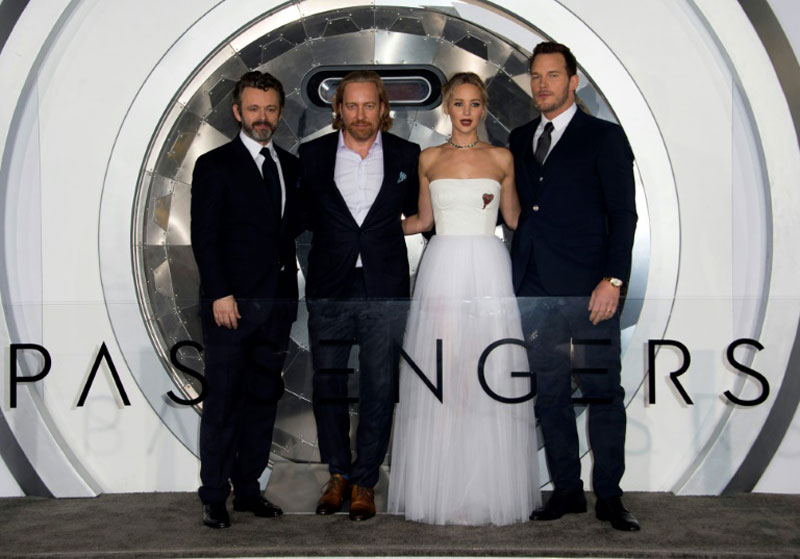 They are two of the hottest stars on the planet, but it took a movie about loneliness in deep space to bring together Chris Pratt and Jennifer Lawrence.

The pair appear together for the first time in “Passengers” as strangers on a 120-year journey to a distant planet when their hibernation pods wake them 90 years too early.

Pratt, 37 — one of Hollywood’s most sought-after leading men thanks to roles in “Jurassic World” and Marvel’s “Guardians of the Galaxy” — joked that the pair had been “waiting for the perfect project” to finally combine their talents, but reaction to preview screenings suggests they should have waited longer.

Mainstream critics have given the film almost universally negative reviews, pointing to its confused, half-comic, half existential thriller tone and nonsensical plot.

Entertainment Weekly described it as a “risible two-hour exhibit of sci-fi Stockholm Syndrome” while the Hollywood Reporter concluded that “dazzling design and star power don’t quite keep this starship afloat.”

Pratt and Lawrence play Jim and Aurora, an engineer and a journalist who try to unravel the mystery behind the malfunction of their stasis pods and realize their spaceship is on the brink of collapse, jeopardizing the lives of 5,000 others hibernating on board.

“When I read it I was told to imagine Jen Lawrence in the lead role,” Pratt said at a news conference, “and I was like ‘damn, okay!'”

“So I read it picturing Jennifer and at the end I called my manager and I was like ‘this is amazing, but how possible is it that it could be Jen and, if it wasn’t Jen, who could it possibly be?’ There was no one else that got me excited.”

No stranger to sci-fi, Lawrence gained worldwide fame for her portrayal of Katniss Everdeen in the dystopian young adult blockbuster series “The Hunger Games,” which grossed more than $2.9 billion worldwide.

With four Oscar nominations, including one win, she is the world’s highest-paid actress, but has been a vocal critic of the salary gap between male and female actors.

Various reports in the trade press have put her pay-day for “Passengers” at around $20 million, while Pratt is said to have earned $10-12 million.

“I’ve tried to work with Chris before and it just didn’t work out,” Lawrence, 26, said at a recent promotional event for the film in Los Angeles.

The actress described “Passengers” as “the most original story I can remember even experiencing in a very long time,” calling script a “total page turner.”

“All you have is a very human story between these two people,” she said. “So I fell in love immediately with it and Chris was already attached, so I couldn’t have said yes fast enough.”

Reviewers don’t share her enthusiasm for the script, however, arguing that the film killed itself with its problematic opening premise.

After Jim accidently wakes, he rouses Aurora deliberately to relieve his profound loneliness, a selfish act that effectively makes her his victim, undermining any empathy audiences might feel for his character.

“It’s a fantastically creepy start,” the Guardian newspaper says, “and while Lawrence and Pratt undeniably possess the magic spark of on-screen chemistry, the basic creepiness of this anti-meet-cute extinguishes what the filmmakers presumably are hoping is a warm fuzzy glow of spiky, sparky interaction.”

One aspect of “Passengers” critics have praised is the casting of Michael Sheen, an accomplished stage and screen actor known to millions as a vampire in the “Twilight” saga and a werewolf in the “Underworld” franchise.

The 47-year-old Welshman has been singled out for praise for his portrayal of Arthur, the ship’s android bartender, who has to figure out the balance between being robotic and human.

“I was so excited on my first day to walk onto the set, to meet Jen and Chris, and I thought I’m going to look fairly spiffy as I walk on in my costume,” Sheen said.

“And then I was given the green tights that I had to wear at all times and I knew my chances with Jen were over.”

Distributed by Columbia Pictures, “Passengers” is due to be released in the United States on December 21.

Jennifer Lawrence is still shaken up about the leak of her private images in 2014. “When my publicist calls me,... Read More...

US positive about providing support to Nepal to combat coronavirus: US envoy
17 hours ago