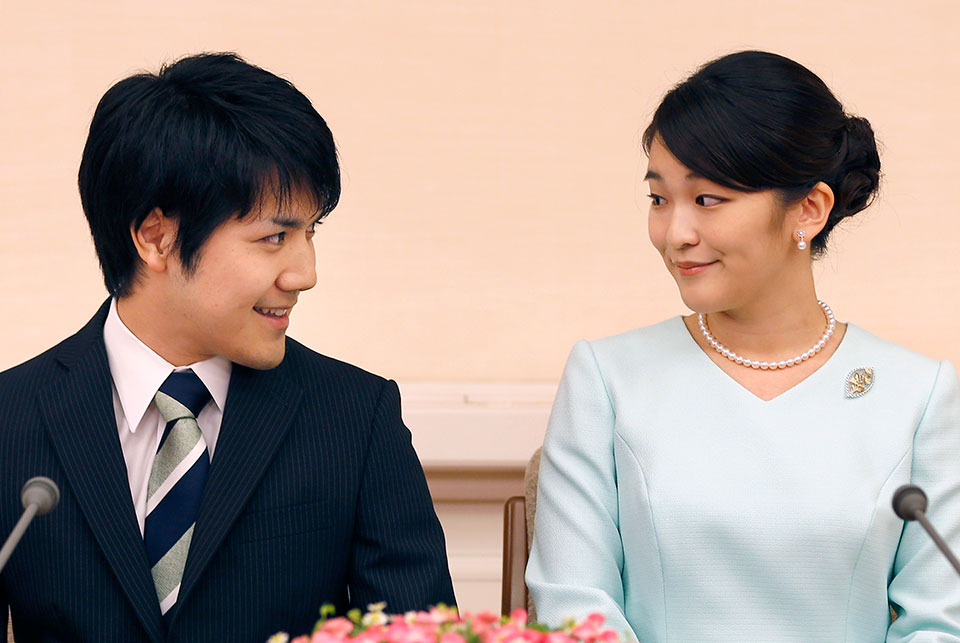 Japan's Princess Mako, right, the elder daughter of Prince Akishino and Princess Kiko, and her fiance Kei Komuro, look at each other during a press conference at Akasaka East Residence in Tokyo, Sunday, Sept. 3, 2017. Japanese Emperor Akihito's oldest grandchild, Princess Mako, says she is getting married to her university classmate who won her heart with bright smiles and sincerity.(AP)

TOKYO, Sept 3: Japanese Emperor Akihito's oldest grandchild, Princess Mako, said Sunday she is getting married to a university classmate who won her heart with bright smiles and sincerity.

Mako and fiance Kei Komuro, both 25, said at a news conference that their relationship started when the princess sat behind him at a campus meeting five years ago at Tokyo's International Christian University, where they graduated.

"First I was attracted by his bright smiles like the sun," Mako said, smiling shyly. They talked for the first time at the event for students ahead of a study-abroad program, and then started dating.

Over time, she said she learned he is "a sincere, strong-minded, hard worker, and he has a big heart," Mako said.

The couple had a long-distance relationship while studying overseas — Mako in Britain and Komuro in the U.S. — for one year. Then Komuro proposed to her after dinner in December 2013.

Mako has since introduced him to her parents, Prince Akishino, second in line to the Chrysanthemum throne, and Princess Kiko, as someone she wished to "share her future with."

Komuro said he was so thankful and happy to have been accepted by her parents, and her grandparents, Emperor Akihito and Empress Michiko. Komuro, a legal assistant who loves playing jazz piano, pledged to have "a relaxed and peaceful" home together.

"Having a family still goes beyond my imagination, but I hope to make one that is warm, comfortable and filled with smiles," Mako said.

Details of their wedding have not been decided, and palace officials say the ceremony is expected sometime around autumn next year after a series of rituals, including one that authorizes the engagement.

The happy news is not necessarily good news for the future of a royal family facing concerns about a declining population to keep their 2,000-year-old bloodline going.

Women aren't allowed to succeed Japan's throne. Mako will lose her royal status after marrying Komuro, who is a commoner.

Mako's 83-year-old grandfather, Emperor Akihito, has expressed a desire to abdicate and is expected to do so in late 2018. He'll be succeeded by his eldest son, Crown Prince Naruhito. Next in line is Akishino, Naruhito's younger brother. After that, the only person left in the line of succession is Mako's little brother. Akihito's three other grandchildren are all women.

Those who are concerned about the future of the royal family want to allow women to succeed the throne and others to keep their royal status so they can keep performing public duties, but a government panel on the emperor's abdication avoided the divisive issue.