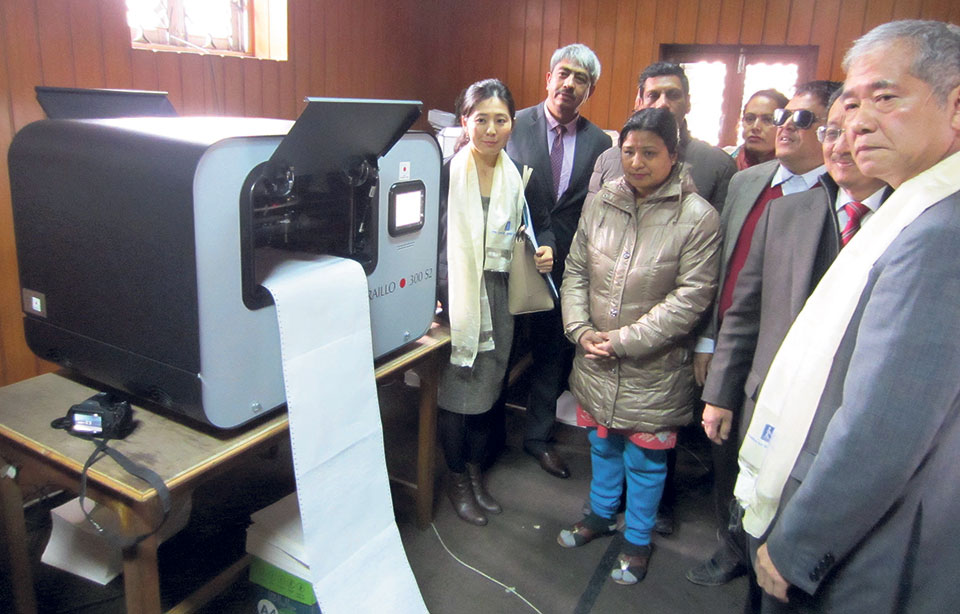 Charge D’Affaires of the Kathmandu-based Japanese embassy, Yuzo Yoshioka, after handing over Braille printers to Nepal Association for the Welfare of the Blind (NAWB) in the capital on Friday. Photo: Republica

KATHMANDU, Feb 8: The Embassy of Japan in Nepal handed over Braille printers to the Nepal Association for the Welfare of the Blind (NAWB), a Nepali NGO working for the welfare of visually impaired people, amid a program in Kathmandu on Friday.

The Charge d'Affaires of the embassy, Yuzo Yoshioka, handed over the printers to the association during the program. The Japanese embassy funded the project for the installation of Braille printers for the visually impaired students in Nepal under the Grassroots Human Security Projects (GGP) of the Government of Japan. The total grant assistance is USD 82,257 (approximately Rs 8.4 million).

The project supported the installation of high-quality Braille printers in order to enhance the printing capacity and efficiency of Braille textbooks for visually impaired students. Before the implementation of the project, due to the high demand, the organization had difficulty in supplying all the required Braille textbooks before the beginning of an academic session.

The embassy expressed its hope that the new set of equipment will improve the printing speed and volume which enables the organization to produce and deliver Braille textbooks on time. It has also claimed that the new equipment will also enable the organization to print Braille textbooks on a wide variety of subjects and make them available for senior classes too.

The Japanese embassy has expressed hope that this project will contribute to ensuring the timely distribution of Braille textbooks to visually impaired children all over the country and that the friendly relationship between Japan and Nepal will be further enhanced by the successful implementation of the project.

TOKYO, Sept 9: Japanese authorities say 37 people have been confirmed dead from a powerful earthquake that struck the northern... Read More...

TOKYO, May 27:  It is somehow fitting in a country known for longevity that one of Japan’s most prominent former... Read More...

Hello, big brother!
7 hours ago
WHO pauses trial of hydroxychloroquine in COVID-19 patients due to safety concerns
8 hours ago