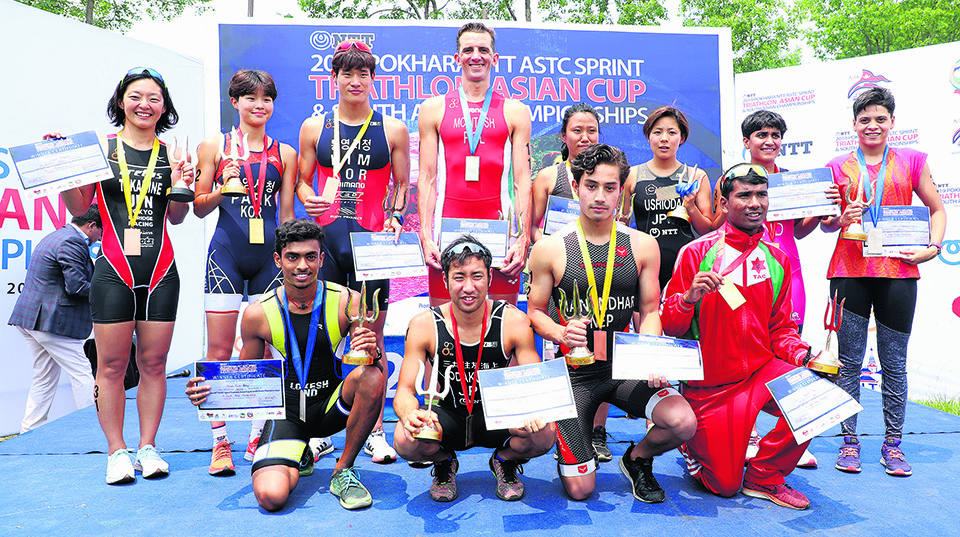 Medal winners pose for a group photo after winning in the first Asian Cup Triathlon Championship in Pokhara on Saturday. Umesh Pun/ Republica

POKHARA, April 28: Japan’s Makoto Odakura has won the first Asian Cup Triathlon Championship held in Pokhara on Saturday. He completed the 20 km cycling, 750 meters swimming and 5 km race in 54 minutes and 17 seconds to win the title.

He is in the 63rd place in the World Rankings and second in the Asian Region Rankings.

In the women’s category of the tournament organized by the Nepal Triathlon Association and coordinated by the International Triathlon Union, India’s Praganya Mohan and Menika Mukeshbhai Nagpur finished on gold and silver medals. Mohan timed one hour, nine minutes and 23 seconds, while Nagpur clocked one hour, 12 minutes and 47 seconds.

Likewise, Nepal’s Soni Gurung bagged bronze with the timing of one minute, 18 minutes and 49 seconds.

In women’s category, APF’s Huma Budha Magar won the gold medal clocking one hour, 10 minutes and 45.22 seconds, while APF’s Nirjata Tamrakar bagged silver in 1 hour, 11 minutes and 38.33 seconds and Dang’s Anisha Chaudhary clocked one hour, 22 minutes and 5.5 seconds to get the third place.

KATHMANDU, June 12: As Nepal takes on Yemen at the Halchok-based Armed Police Force (APF) ground for a match to... Read More...