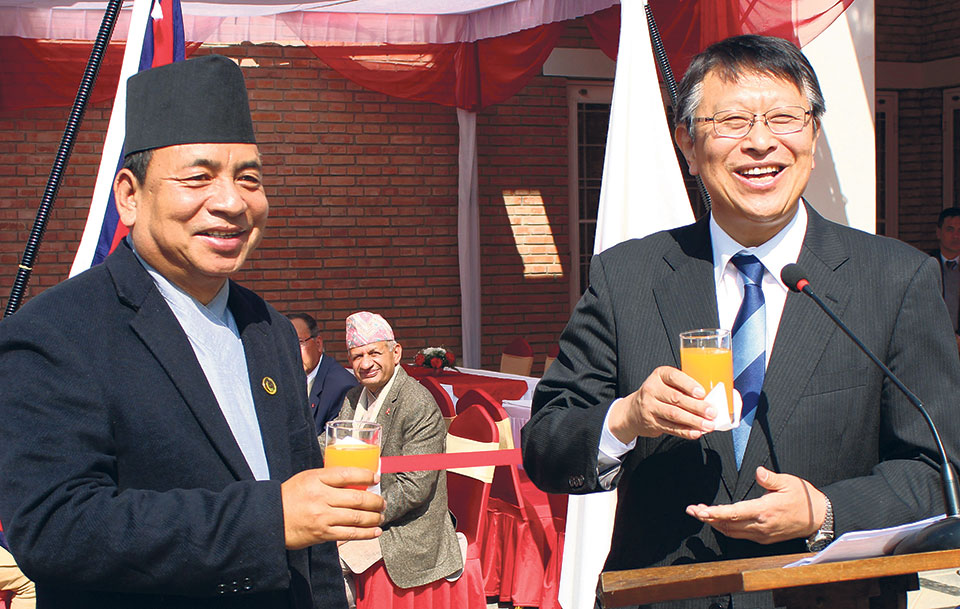 KATHMANDU, Feb 15: Ambassador of Japan to Nepal, Masamichi Saigo hosted a reception at his official residence in Tahachal on Friday to celebrate the 60th Auspicious Birthday of His Majesty Emperor Naruhito.

About 350 VVIP and VIP guests, including Vice-President Nanda Bahadur Pun, who was the chief guest, Foreign Minister Pradeep Kumar Gyawali, Minister for Physical Infrastructure and Transport Basanta Kumar Nemwang, ambassadors and heads of various international organizations in Nepal, members of parliament and high ranking government officials attended the reception, according to a press statement issued by the embassy.

Addressing the function, Ambassador Saigo mentioned that he was pleased to welcome all the guests to celebrate the birthday of His Majesty, the Emperor of Japan.

This is the first birthday celebration since the new era “Reiwa,” meaning “beautiful harmony,” commenced.

Recalling the visit of President Bidya Bhandari to Japan to attend the Ceremonies of the Accessions to the Throne of His Majesty The Emperor last October and the visit of Parliamentary Vice-Minister for Foreign Affairs Norihiro Nakayama to Kathmandu this January, Ambassador Saigo pointed out that the high-level exchanges between Japan and Nepal have been progressing and these visits have contributed toward strengthening the bilateral relations between Japan and Nepal.

The Emperor of Japan is the symbol of the State and unity of the people.

The Birthday of His Majesty the Emperor is celebrated as the National Day of Japan, according to the statement.

RASUWAGADHI, Feb 25: The Rasuwa Custom Office in Timure in Rasuwa district has recorded a nil collection in revenue since... Read More...

KATHMANDU, Feb 23: A Nepali Army officer has been given the responsibility of Force Commander to lead the United Nations... Read More...

Relief for passengers as competition brings airfare down
12 hours ago

New virus has infected over 80,000 people globally
10 hours ago