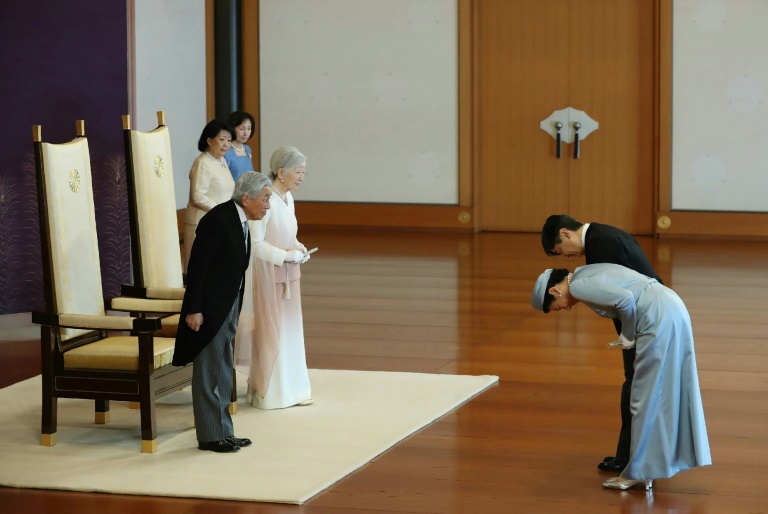 When Japan's Crown Prince Naruhito ascends the Chrysanthemum Throne, he will be taking on a role that has changed almost beyond recognition from its mythological origins.

Naruhito will be Japan's 126th emperor, in a line said to stretch back more than 2,600 years.

Recent decades have seen the emperor's role recast, as Naruhito's father -- Akihito -- stepped beyond his religious remit to offer not just prayers but also comfort to survivors of Japan's natural disasters.

He stunned the nation in 1991 when he rolled up his sleeves and took off his shoes in a shelter to kneel before survivors of a volcanic eruption -- drawing outcry from some nationalist zealots.

His more modern approach was once seen as risky, said Yuji Otabe, history professor at Shizuoka University of Welfare.

"It was a sort of gamble," Otabe told AFP. "Such an act would have been impossible in the past because the Emperor was regarded as god."

But the changes have helped cement Akihito's popularity, with the vast majority of Japanese saying they have "positive feelings" or "respect" for him.

"In one era, emperors were like popes and in another they were like czars. Now the Emperor's role can be said to be similar to kings," said Asao Kure, associate professor at Kyoto Sangyo University.

"The roles of the emperor have mirrored each era of the country," Kure added.

Tradition holds that Japanese emperors are descended from legendary sun goddess Amaterasu, who imparted the "three treasures" of a mirror, sword and jewels that are a key part of the imperial regalia.

In keeping with their mythological status, the "treasures" are kept from public sight and will remain hidden even when handed to Naruhito as he takes the throne.

In the early years of Japan's imperial history, emperors were military commanders from powerful families who controlled wealthy settlements.

Regarded as descendants of Amaterasu, emperors have always played a key role in performing the rites of Japan's native Shinto religion, which venerates deities found in nature.

The role of the emperor in governing, however, has varied. Some, like Emperor Tenmu in the seventh century, wielded enormous power.

Dubbed "king of kings" by imperial enthusiasts, Tenmu shaped the political system based on ancient law and cemented imperial power.

But many other emperors served as little more than puppets or rubber stamps for samurai warriors or ambitious officials from leading families.

In the late 1860s, reformists brought in an era of rapid change that turned Japan from a rural backwater into a world power.

Compared to the titular heads of state that had come before, the new emperor Meiji -- great-grandfather of outgoing Emperor Akihito -- wielded significant power.

Defined as "sacred and inviolable", the emperor was now a father figure to be served and obeyed by his family -- the state.

That ideological framework was used by nationalists in the military and government to lead the country into conflict during World War II, when many young soldiers carried out suicide attacks screaming: "Long live the Emperor."

When Akihito was born in 1933, the role he was expected to inherit came with full sovereign powers, including dissolving parliament, issuing decrees and commanding the armed forces.

All that ended with Japan's defeat in World War II. Then crown prince Akihito listened in tears on August 15, 1945 as his father Hirohito made an unprecedented radio address to announce the shock loss.

The future of the imperial household hung in the balance, with some in favour of dissolving the monarchy because of Hirohito's war role.

But US General Douglas MacArthur, who led the post-war occupation of Japan, opted to preserve the dynasty while greatly curbing its power, effectively turning the emperor into a figurehead.

After World War II, an imperial rescript clarified the emperor should not be regarded as divine, but performing prayers for a successful harvest and national peace is still considered one of his key responsibilities.

- Shifting with the times -

Akihito embraced the revised role when he took the throne in 1989, and focused on remoulding the monarchy for a democratic age.

On top of religious and formal duties such as attending ceremonies and receiving foreign guests, he has advocated for peace even as debate continues on Hirohito's war role.

Akihito has also rejected nationalism, expressed "deep remorse" over Japan's past and called for history to be remembered, rather than revised.

He has said defining his position as emperor has been an "endless" process, one he now bequeaths to Naruhito.

The crown prince has already indicated he will continue reshaping the role, calling for "new royal duties" to fit modern times and saying he hopes, like his father, to be "close to the people".